Pyongyang has temporarily barred all Malaysian citizens from exiting North Korea in a row over the assassination of the brother of Kim Jong Un. In turn, Malaysia banned Pyongyang's diplomatic staff from leaving. 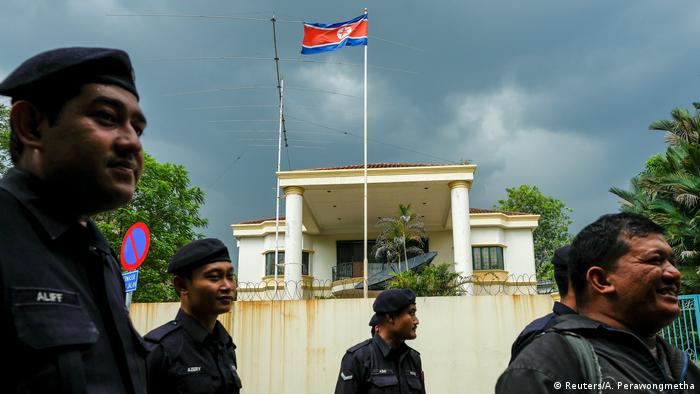 North Korean officials proclaimed the measure on Tuesday, saying they were aiming to ensure the safety of diplomats and citizens in Malaysia.

"All Malaysian nationals in the DPRK will be temporarily prohibited from leaving the country until the incident that happened in Malaysia is properly solved," the official Korea Central News Agency said on Tuesday, citing the Foreign Ministry and using the initials of the Democratic People's Republic of Korea.

Malaysians will be allowed to "conduct business and live normally" while the travel ban is in place, according to the report.

Soon after the move, Malaysia responded by announcing that no "official or employee" of the North Korean embassy in Kuala Lumpur would be allowed to leave Malaysian territory.

The latest escalation comes after both countries decided to expel each other's ambassadors.

Possible suspects holed up in embassy

"How much longer do they want to hide in the embassy?" police chief Khalid Abu Bakar said. "It is a matter of time before they come out," he added.

Police cordoned off the embassy building on Tuesday.

"We will not raid the embassy building," Khalil said. "We will wait for them to come out. We have got all the time."

The row between the two states has been escalating since Kim Jong Nam was killed at Kuala Lumpur's airport three weeks ago. South Korea has blamed the crime on North Korean agents. Preliminary investigation by the Malaysian officials found that the 45-year-old man was poisoned with a highly toxic nerve agent.

Pyongyang has yet to confirm that the murdered man was in fact Kim Jong Un's brother. Still, they denounced the Malaysian investigation as an attempt to smear the country. On Tuesday, Pyongyang's foreign ministry said it hoped that Kuala Lumpur would solve the issue in a "fair and timely manner based on goodwill."