A North Korean national who was a suspect in the murder of the country's leader Kim Jong Un's half-brother has accused Malaysia of forcing him to make a confession. 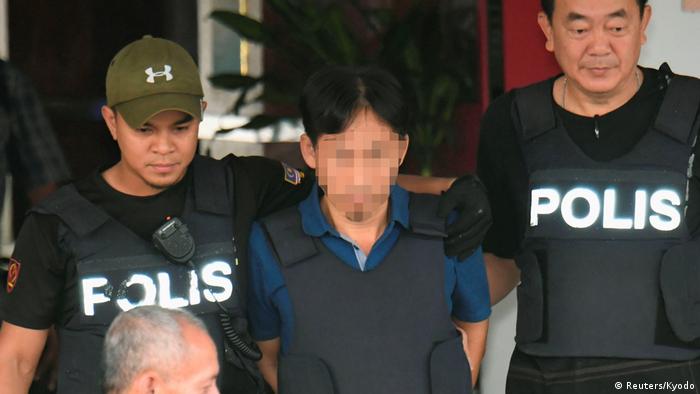 Frustrated by a lack of evidence, police in Malaysia have released a man they believe played a role in the death of Kim Jong Nam, the estranged half-brother of North Korea's leader. Seven suspects remain at large. (03.03.2017)

Malaysia says it will free a man detained over the killing of North Korean leader Kim Jong Un's estranged half brother. As tensions soar, the Kuala Lumpur government has scrapped visa-free travel for North Koreans. (02.03.2017)

Malaysia has charged an Indonesian and Vietnamese woman with the murder of the estranged half-brother of North Korea's leader. Both face the mandatory death penalty by hanging if found guilty. (01.03.2017)

A North Korean chemist who was deported from Malaysia following the killing of North Korean leader Kim Jong Un's estranged half-brother, Kim Jong Nam, spoke out for the first time Saturday while on his way back to Pyongyang.

Speaking to reporters in Beijing, Ri Jong Chol said he was not at the Kuala Lumpur airport when Kim Jong Nam was killed after his face was smeared with a nerve agent. Ri said he was accused by police of masterminding the attack and detained for four days following the death of Kim Jong Nam. Ri added Malaysian police threatened him and his family if he did not confess to the crime.

"These men kept telling me to admit to the crime, and if not, my whole family would be killed, and you too won't be safe. If you accept everything, you can live a good life in Malaysia," said Ri, who added, "They were plotting to tarnish my country's reputation."

Ri was reportedly working at an IT department in Kuala Lumpur, but local media reported Deputy Prime Minister Zahid Hamidi as saying, "[Ri] entered the country with the intention to work with a company, but police investigations found that he did not work at the said company."

Two female suspects have also been arrested in relation to the murder. The two women were caught on surveillance footage putting the nerve agent, which is considered a weapon of mass destruction, on Kim Jong Nam's face, but have said they thought they were part of a prank. Police say the nerve agent, VX, was almost certainly made in a state weapons lab. North Korea is believed to possess chemical weapons, including VX.

"Malaysia does not produce, stockpile, import, export or use any … toxic chemicals including VX," according to a statement from the Malaysian Ministry of Foreign Affairs.

Malaysian police issued an arrest warrant for Air Koryo employee Kim Uk Il Friday. Police did not say why he was a suspect.