The Taliban and China's quest for Afghan copper

Instead of attacking development projects, the Taliban now claim that they want to support and even protect foreign investments in Afghanistan. A Chinese copper mining project could be revived soon. 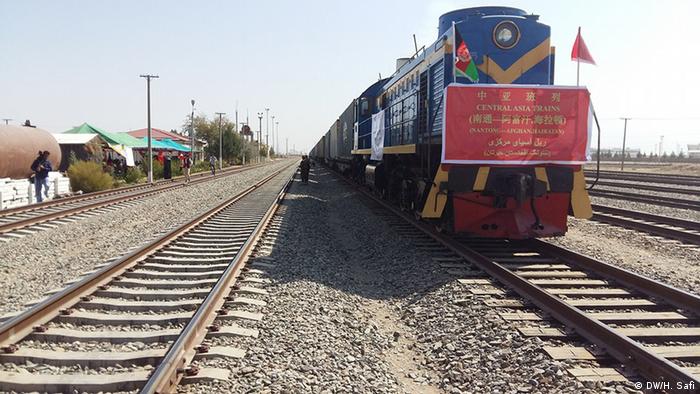 It sounds paradoxical: The Taliban want to support and encourage big infrastructure and development projects in Afghanistan. That's the bottom line of an unexpected statement the insurgent group published on its website on Tuesday, November 29. For more than a decade, the militant Islamists have been dominating the headlines because of their frequent bomb attacks on infrastructure in Afghanistan.

According to the Kabul government, Taliban attacks have caused a damage worth more than $2 billion since the start of their fall offensive alone. So it was hardly surprising that the government's reaction to this latest statement was reserved. "How could we trust them now?" Shah Hussain Murtazawi, a spokesman of Afghan president Ashraf Ghani, was quoted by the AFP news agency as saying. "They have to prove their promises in action."

In most parts of the conflict-ridden country big infrastructure projects have been stagnating due to security concerns and the lack of transportation. Business partners are reluctant to invest or back out from existing projects, thus contributing to the economic and military concerns that have driven millions of Afghans out of their homeland. Almost 40 percent of Afghans live below the poverty line.

In their statement, the Taliban mentioned motorways, railways and the TAPI pipeline between Turkmenistan and Afghanistan, as well as the CASA-1000 energy project and the Chinese copper mining project Mes Aynak as examples for infrastructure ventures they wanted to protect in the future, because they were in the interest of the Afghan people. Only a day before this statement, Afghan and Turkmen government officials had opened a railway line which is supposed to connect Afghanistan with Europe via Turkmenistan. 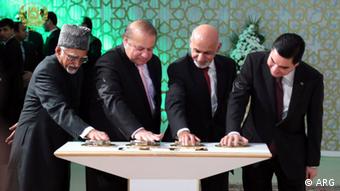 A cash injection for the Taliban?

But why are the Taliban issuing this kind of statement at this moment? In an interview with the British daily Guardian, Rahmatullah Kakazada, a leading Taliban official, told that the group was facing a financial crisis. Previous financial supporters were no longer willing to be responsible for the large number of civilian casualties, Kakazada claimed.

There were also tensions within the group and an ongoing debate on how to win the respect of the Afghan people. So, could the statement indicate a strategy shift to improve the financial situation and to boost the Taliban's image?

The Taliban already profit from existing projects, said Waheed Mozhda, a political analyst who served under the Taliban regime. "They get paid by the companies implementing the projects, so they don't attack them," Muzhda explained.

According to him, the latest statement is not a brandnew development. "At the time of the latest conference of Taliban representatives in Qatar, the Taliban already declared to safeguard the TAPI pipeline between Turkmenistan and Afghanistan and other key infrastructure projects." When the new railway connection was inaugurated earlier this week, the chairman of the political bureau of the Taliban in Qatar, Sher Abbas Stanikzai, travelled to Turkmenistan to affirm the determination of his group to abstain from attacks on infrastrutcture.

However, Stephen Carter from Global Witness, an international NGO fighting corruption in the mining sector, remains skeptical: "If the Taliban were really to support infrastructure projects as a matter of principle, that would imply that they would cease to demand a part of the profits to allow them to move forward."

According to Carter, the Taliban have benefited enormously from taxing illegal as well as legal mining. He thinks it is not likely for them to give up their second-largest source of revenue.

But if the new policy would include the payment of a tribute to the Taliban, then the announcement would be much less significant, Carter argues. Mining would continue to fund the conflict and an illegal armed group, which is already a major problem. "It is unacceptable that mines already provide so much income to the insurgency and to illegal armed groups of all kinds, " the Global Witness expert said.

Green light for China's copper mine?

But if the Taliban are no longer demanding financial payments, it would mean that shelved projects like the Mes Aynak copper mine in Logar province could be revived.

While the Chinese state-run mining company China Metallurgical Group Corporation (MCC) signed a $3 billion contract with the Afghan government as early as in 2008, not a single ounce has been mined so far. Only a day after the statement of the Taliban, a Chinese delegation met Afghanistan's President Ashraf Ghani in Kabul. China's deputy Foreign Minister Kong Xuanyou called Afghanistan an integral part of China's economic belt strategy.

So far, the copper project has been halted because of security concerns and this situation hasn't changed yet, says Wang Lian, Central Asia expert at the Department of International Politics at Peking University. "Above all, the Taliban's claim to protect and support development projects like the Afghan-Chinese Mes Aynak-mining project, serves as propaganda.

"In reality, the Taliban are presently not capable of protecting projects like this. First, there has to be considerable progress with Afghanistan's peace process. For the time being, I don't see any realistic chance for cooperation between Chinese investors and the Taliban."

In fact, the Taliban are not the only obstacle when it comes to mining and transportation of natural resources like minerals in Afghanistan, Stephen Carter underlines. 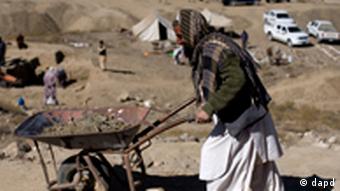 So far, Mes Aynak near Kabul is known for its archaeological excavations. But this could change, as the region harbors the second largest copper deposits in the world

"Major problems of corruption, mismanagement and a lack of benefit for local communities have long undermined hopes that the people of Afghanistan will see any benefit from the resources which belong to them. There has been violent competition among  supposedly pro-government armed groups over these resources even in the absence of the Taliban," Carter said.

"The Mes Aynak project, for example, has been the subject of questions over whether the contract would actually deliver the benefits its backers had promised, while in places like Badakhshan there has been illegal exploitation of resources like lapis lazuli before the Taliban became a force to be reckoned with in the area."

But legal reforms safeguarding the benefits to the local communities and a coherent overall security strategy for all extractive areas in the country will have to be implemented by the government, not by the Taliban.