The meat paradox: Why we eat animals even though we don′t want to | Science | In-depth reporting on science and technology | DW | 22.02.2021 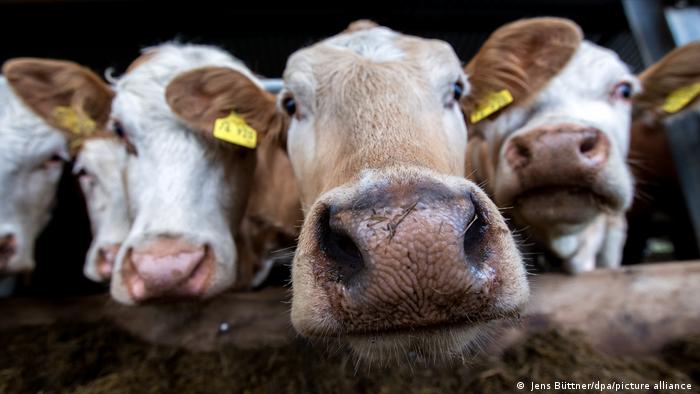 If you like steak ― could you kill this cow?

The sheep is wriggling about. Kai will need to use the bolt gun a few times. He hesitates. I wonder if he'll back out after all. But then he takes a deep breath and pulls the trigger. The six-month-old sheep immediately collapses. But the bolt shot alone does not kill it. Kai has to cut the animal's throat. The butcher steps in to help him do it faster.

The average person in Germany eats almost 60 kilograms (132 pounds) of meat per year. In the US and Australia, the figure is more than 100 kilograms. Very few people slaughter the animals and prepare the meat themselves; instead, they buy it ready-made from the supermarket or the butcher. This makes it easy for consumers to forget that the steak, lamb shoulder and chicken thighs on their dinner plates were once part of a living creature.

Decoupling meat from the living being it once was helps people escape the dilemma of the "meat paradox": the psychological conflict between people's dietary preference for meat and their moral opposition to animal suffering and death.

Kai, standing in a pool of blood, can't escape anything right now, though. The sheep has finally stopped twitching and lies lifeless at his feet. He's fighting back tears, trying to comprehend what just happened. "I killed an animal," he says.

Kai is a colleague of mine. He slaughtered the sheep as part of an episode of DW's YouTube series, "Planet A," which tackles environmental issues such as recycling, food waste and the plastic industry.

If you want to talk about environmental damage and climate change, you can't avoid the topic of meat consumption. According to the Meat Atlas 2021, published by the Green-Party-supported Heinrich Böll Foundation, Germany's Ministry for Environment and Wildlife Protection and the international monthly newspaper Le Monde diplomatique, 70% of global agricultural land is used for livestock farming.

Feedstuffs are grown on 40% of this land — primarily soy. As the appetite for meat is increasing, and with it the need for feed and pasture for the animals, forests and grasslands are having to give way. CO2-absorbing plants and biodiversity are disappearing with them. 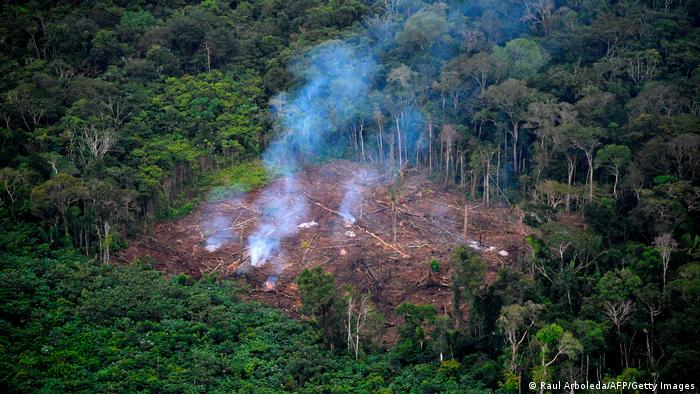 The growing demand for meat means that rainforests like the Amazon suffer.

To produce one kilo of beef, it takes around 15,000 liters (3,962 gallons) of water. Industrial factory farming, which consumes a particularly large amount of water, results in dried-up rivers and wetlands, sinking groundwater levels and salinated soils.

And that's not all. The overuse of antibiotics in livestock results in multiresistant germs. And the destruction of ecosystems to accommodate for large-scale meat consumption, as well as the farming of these animals, increases the chances of viruses crossing over from animals to humans.

Kai knows all this — that's why he is filming this episode.

What he's also always known is that the animals on his plate didn't go to sleep peacefully and never wake up, nor were they cuddled to death. Kai likes to eat meat anyway, albeit with a tinge a guilt. He's not alone in feeling like this.

I put a call out to get an idea of how widespread the meat paradox is among people from diverse backgrounds. With the help of my colleagues from the various language editorial departments at Deutsche Welle, I collected comments from people with European, African and Middle Eastern backgrounds.

Not all of the participants revealed their exact country of origin, so I have listed the name of the editorial office from which the following messages were sent.

"I feel sorry for the animals and I love them very much, but I still eat meat. Both are incompatible ideas. This world is full of lies and contradictions." (Africa desk)

"I love meat very much, but I feel very sorry for the animals being hurt or killed." (Africa desk)

"No matter how hard a heart can be, seeing an animal in its blood is not easy to bear. I still eat meat." (Charles, Africa desk)

Benjamin Buttlar is a social psychologist at the University of Trier, where he researches the meat paradox. He believes the basic moral principle of not wanting to kill or inflict suffering applies to all people, regardless of their cultural background.

The difference between dogs and pigs

Research from biologists such as Donald Broom or neuroscientist Lori Marino describe pigs as highly social, intelligent and compassionate creatures. Despite this, pigs have ended up in the category of "farm animal" and are — right after poultry — the most commonly consumed animal worldwide.

Distinguishing between farm animals and pets is one strategy people use to resolve the meat paradox for themselves. When some animals are seen as lesser than others, it is easier to justify killing and eating them. 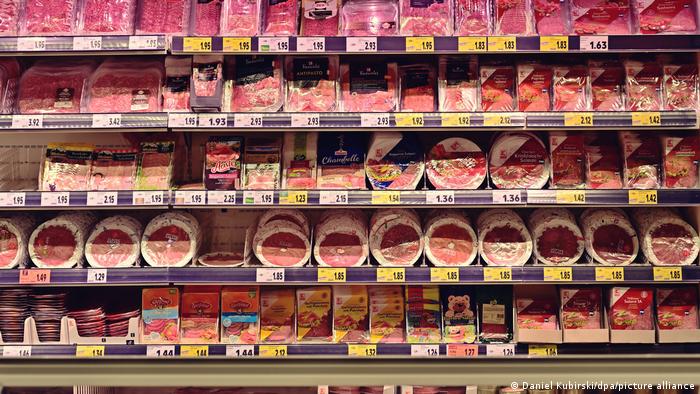 Psychologist and publicist Melanie Joy calls this distinction "dichotomizing." It goes hand in hand with the fact that meat eaters deny farm animals their individuality — that which we would never deny our pets, says Buttlar.

"There are also very specific rationalization strategies that we can use to abdicate responsibility," Buttlar told DW. The psychologist speaks of the three Ns of meat consumption: normal, necessary, and natural.

"I eat meat. As a child, it was normal anyway. My grandma and mom always cooked very traditional Kölsch and Rhineland food. That includes blood sausage, sauerbraten, rouladen, etc. My dad always said you have to try everything. And I've always lived by that." (Cologne, Germany)

"Since I do a lot of sports where, for example, muscle building is one of the main goals, and I pay a lot of attention to meeting my daily macro-needs, eating meat is virtually 'unavoidable.'" (Germany)

"God created animals for us to eat. So for that reason, I don't feel bad." (Africa desk)

Add to that another N, Buttlar says — for "nice." Meat tastes far too good for many people to want to give it up.

After Kai has cut the sheep's throat and after the animal has stopped twitching, he looks up from its lifeless body and out to the surrounding scenery. In Germany alone, 763 million animals were slaughtered in 2019, according to the animal welfare organization The Albert Schweitzer Foundation for Our Contemporaries. Worldwide, that figure is more than 70 billion per year. Kai glances briefly at the camera, asking: "Just so we can eat meat?"

Most of these animals are bred and slaughtered in industrialized nations — most often, en masse in factory farms. According to the Meat Atlas, China alone produces about one-third of the global meat supply.

On the African continent, on the other hand, the average per capita consumption of meat is 17 kilograms per year. That's barely one-sixth of the average in Australia and the US.

Does this imbalance have any bearing on the meat paradox?

"When I see meat, I don't even think about my family, let alone the animals. Maybe it's because meat was so expensive (in my homeland) that we were very happy if we got it at all." (Syrian, now living in Germany)

"This idea does not apply to us. Tell Westerners who are worried about human and animal life." (Africa desk)

"Dissonance, the psychological process underlying the meat paradox, is assumed to be universal," Buttlar said. Cognitive dissonance is the term used to describe the uncomfortable mental state in which a person holds conflicting beliefs and attitudes.

In this context, for example, it's: I feel sorry for the animal's death and pain, but I still want to eat meat.

Buttlar points to one of the few studies that considered the cross-cultural differences of the meat paradox. Here, researchers found that certain reactions were universal across cultures.

For example, the increased disgust felt as soon as the participants were shown a dead pig with its head still attached. Seeing a dead animal in its entirety made it more difficult for people to detach the meat from its living, breathing origin, and the desire of the participants to eat the pig was reduced.

Kai experienced this first-hand. "As soon as the head was cut off and the sheep was skinned, it was just meat," he said.

S3E1: How to kill an animal humanely

However, Buttlar said, these studies suggest that this effect is smaller among people from countries where self-slaughter is more common than among those who mostly eat meat in a processed form, such as in kebabs or chicken nuggets.

The research also suggests that the more relevant the issue is to the person, the more strongly the dissonance is felt, Buttlar said. Not all animals eaten in the world are devalued, but primarily those eaten in one's own culture. For example, it's not uncommon to eat dogs in some countries in the world, where they aren't given the status of pet as in many other nations, just as cows, chickens and pigs are perceived primarily as a food source in many Western nations. This is another indication that the meat paradox does apply across the globe, but that it plays out differently from culture to culture.

The power of norm and habit

In addition to all the psychological reasoning people use to try to cope with the meat paradox, however, there are people who choose not to eat meat, or any animal products at all, in order to live with a clear conscience.

"It's just hypocrisy: If you don't want to kill an animal, why eat it?" (Africa desk)

"I have been eating a vegan diet for three years. I no longer crave meat at all. On the contrary, the meat counter in the supermarket seems like a graveyard to me." (Yemeni, lives in Switzerland)

I, too, decided to go vegan a few years ago after 19 years of being vegetarian. For me, it was the simplest strategy to resolve the meat paradox.

Simple? Buttlar disagrees with me.

"Eating meat is the norm in most societies," he said.

If you come from a family full of vegetarians and vegans, like me, making the switch is a lot easier. In Kai's family, however, eating meat is an integral part of life. After a period of abstinence, he returned to steak. Out of habit, probably — he said he didn't know for sure.

In a study led by Buttlar in 2019, he wrote that increasing awareness of the environmental concerns and health risks associated with meat eating were far more likely to result in behavioral change, as opposed to moral arguments.

Nevertheless, slaughtering an animal with his own two hands and seeing it lie at his feet in a pool of blood has stayed with Kai. And it will for a while longer, he suspects. "Death itself is overwhelming," he told me.