The Berlin Wall's Checkpoint Charlie border crossing came to symbolize the Cold War divide. Now, it is home to a memorial of the division of Berlin, putting a face on those who risked their lives to leave communism. 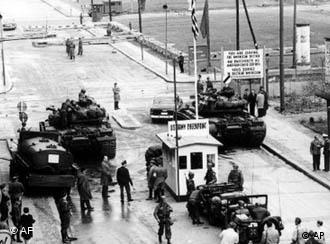 The museum stands next to the original US checkpoint, seen in this undated photo

The Museum Haus Am Checkpoint Charlie tells the 28-year history of the Berlin Wall mostly through the stories of thousands of daring attempts to escape to the West.

From cars and suitcases that once concealed people, to chair lifts that hoisted families over the Wall, to the remnants of a hot-air balloon and even a small submarine, the museum offers a glimpse of the sheer willpower and creativity of those who were undaunted by the 3.6-meter-high (12 feet) concrete stretch. More than 5,000 successfully escaped during the wall's lifespan.

Artifacts of the border 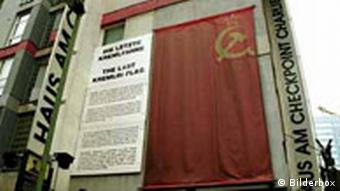 Museum visitors can also comb through a car looking for a life-sized doll, representing an East German refugee, and can see the uniform of a US pilot of the one of the planes that was used to drop food and other supplies on West Berlin during the 1948 Airlift.

Photographs show an escape tunnel dug by senior citizens after their neighbor deemed them too old to help with his (they claimed it made them a decade younger).

They also document failed escapes, like that in 1962 of bricklayer Peter Fechter, who was fatally shot by East German guards and died in the Wall's death zone.

The famous "You are leaving the American Sector" sign is on display, along with remnants of the old border line and the wire used to block Eastern windows. 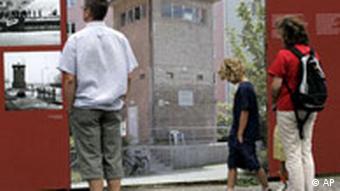 The museum began in 1962 in an apartment on Bernauer Strasse, a major street divided by the wall.

Rainer Hildebrandt, a human rights activist who had been imprisoned for criticizing the Nazis, saw the wall going up and "asked himself, what can I do about it?" said his wife, Alexandra. "He had a similar experience, struggling against inhumanity in the Nazi time."

Hildebrandt began helping rescuers who smuggled people into West Berlin. Many grateful East Germans then donated their tools for historical preservation, and Hildebrandt organized them into an exhibit "to show people the truth about the wall," said Alexandra Hildebrandt, now the museum's director.

A year later the museum opened next to the famous Checkpoint Charlie crossing, one of only three border crossings along the Berlin Wall.

It became a place of refugee for escapees and a historical documentation of what one East German general called "the best border security system in the world."

From an activist center to a tourist attraction

Hildebrandt died in 2004. Many of the exhibits are his originals, and his wife said there were no plans to modernize them.

About 800,000 people a year now visit the museum, which has broadened over the years with art depicting a divided Berlin and exhibits on world religions and non-violent protests.

Outside, a new exhibit set up by Berlin officials lays out a timeline of the Wall from its 1961 building to the demonstrations that ultimately forced guards to open the Wall in 1989.

Tourists can also see remnants of the Wall, or walk along cobblestones that mark the border where Berlin was once divided.