A new, private Berlin museum focuses on everyday life in East Germany. While some see the exhibition as an important part of coming to terms with the GDR, others feel that it plays down the brutality of a dictatorship. 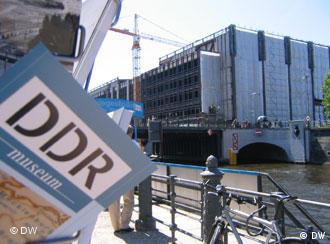 The museum sits across from the Palace of the Republic, which is being demolished

Visiting Berlin as a tourist a couple of years ago, Peter Kenzelmann wanted to explain East Germany to his girlfriend. The ethnologist and political scientist from Freiburg in southwestern Germany had been to East Berlin years ago. But his partner had not witnessed the atmosphere behind the Iron Curtain and so the couple searched for a museum that showcased the daily lives of ordinary East Germans.

"Try Amsterdam," officials at Berlin's tourism bureau told them, adding that someone had set up such a museum in the Netherlands.

Flabbergasted, Kenzelmann decided to fill the void. He hired a team of historians and museum managers, began asking people to donate everything East German and found a bank to finance the venture.

"I didn't want to become dependent on subsidies -- we are a business," the 36-year-old said on Monday, sitting outside his freshly opened DDR, or GDR Museum, which is located in the basement of a brand-new hotel and entertainment complex in the heart of former East Berlin. 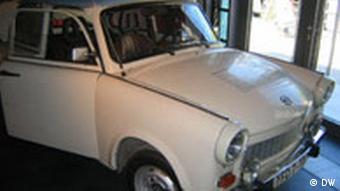 Once omnipresent on East German streets, now a museum piece: the Trabant

Kenzelmann and his team want visitors to have a hands-on experience. Many of the exhibits, such as school bags, award medals or diaries, are hidden in drawers that have been built into room dividers that resemble East Germany's prefabricated apartment buildings, or Plattenbauten.

There's a Trabant car that people can pretend to drive. In one corner, curators have rebuilt a typical East German living room and kitchen. East German propaganda phrases -- "Learning from the Soviet Union means learning how to win" and "Apple sauce always tastes good" among them -- adorn the walls. Short texts in German and English describe the items in the various sections such as those on education, work, shopping, media, sports and vacation.

"On their Web site it says that they still need nudist photos, but maybe that's an old posting," Heidrun Loeper told Ingrid Fischer as the two women came across the large display on nudist culture, which was popular in the GDR. 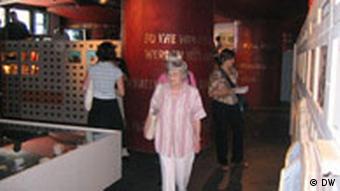 Loeper, a 64-year-old literary scholar, and Fischer, a 72-year old former primary school teacher, kept smiling as they walked through the museum and recognized things they themselves had used years ago. Both said they enjoyed the exhibition as it helped to rectify the image of eastern Germans.

"We've been put down as Neandertalers and this shows that we lived like normal people," Fischer said, adding that many East Germans were not that affected by the repressive aspects of the communist regime such as the GDR's secret service, or Stasi.

Joseph Spadola, a 23-year-old philosophy student from New York City, agreed that the museum's emphasis on the mundane was a good thing.

"This is the part we never hear about," he said. "It's fascinating to see a different way of life while keeping ideology out of the picture." 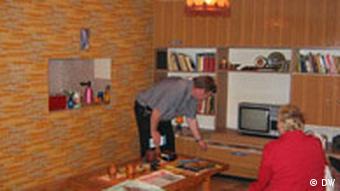 Too cute? Visitors check out the living room inside the mock apartment

Those working to remind people of the dictatorial nature of the East German regime felt differently. Gabriele Camphausen, who is in charge of educational programs at the federal commission that administers files from the Stasi secret police, said she was stunned when she visited the museum.

"Visitors can leave the exhibition with the impression that this was a slightly bizarre state in the 20th century," she said. "It doesn't become clear that this was a brutal dictatorship ... Imagine if someone had done such a museum on daily life during the Nazi era. People would criticize it, and rightly so."

Hubertus Knabe, director of the memorial at the former Stasi prison in Berlin Hohenschönhausen, added that the museum's concept fell in line with recommendations by a government commission to concentrate less on places symbolizing repression in the GDR.

"I'm skeptical that depictions of everyday life can explain life in a dictatorship," Knabe said, adding that he had not been to the museum. "It's not important how people ate and slept when describing a political system." 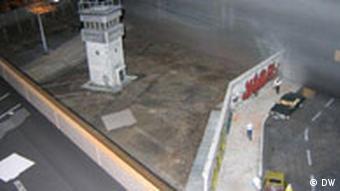 But the museum's director, Robert Rückel, countered that the Stasi's infiltration was clearly documented. He pointed to a corner with a Stasi work station where visitors can eavesdrop on conversations in another part of the exhibition. Rückel added that other museums in Berlin already highlighted aspects such as the wall and Stasi repression.

"Our goal is to focus on the daily lives of people," he said. "It's an experiment."

And a good one at that, said Thomas Ahbe, a sociologist who has written extensively on East German culture and identity.

"It compliments the picture," he said, adding that so far only so-called museums on everday life that are run by laymen exist throughout East Germany.

"The crimes that happened in East Germany have been documented extensively, but the scientific research on daily life has fallen by the wayside," he said.

"I think it will still take a long time before we can get to a balanced view of GDR history."

More information on the new Berlin museum in English

Memorial at a former Stasi prison

This federal museum also includes East Germany in its exhibition

More information about the commission's work in English