A debut film by a young German director about East Germany's secret police has critics raving and awards piling up. The film marks a sharp departure from previous, often sentimentalized films about the era. 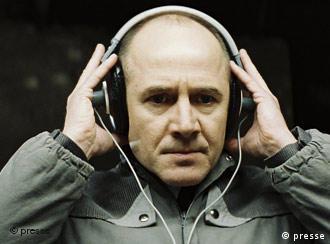 Up to now, successful movies about East Germany generally treated their subject with rose-tinted glasses firmly in place over the camera lens.

"Sonnenallee," a coming-of-age story released in 1999, was a comedy that focused on the absurdity of daily life in the German Democratic Republic. While it showed the pervasive presence of the police state, the functionaries and police were generally doltish buffoons, more annoying than anything else.

The 2003 international hit "Goodbye, Lenin!" took a somewhat warm-and-fuzzy look back at the time just before and after the fall of the Berlin Wall. While not praising the GDR system, the film did take a swipe or two at the cold wind of Burger King capitalism that suddenly blew through the land. 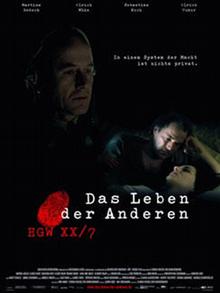 Poster for "The Lives of Others"

"Das Leben der Anderen" ("The Lives of Others"), the first feature film by 32-year-old Florian Henckel von Donnersmarck, dispenses with these nostalgic treatments, instead choosing to explore how East Germany's paranoid secret police service, the Stasi, invaded the lives of so many of its own citizens, destroying many along the way.

"This film is a more serious consideration of the era than ones that proceeded it," said Mike Swain, head of the German online movie site kino.de. "It has a very precise analysis of a police state. On another level, it asks if it's possible to maintain one's humanity in a totalitarian system."

Spies in the attic

The story revolves around Stasi officer Gerd Wiesler (Ulrich Mühe), who is given the task of spying on a successful East German playwright named Georg Dreyman (Sebastian Koch). The dramatist has done nothing to offend the regime, but an East German minister has taken a liking to Dreyman's girlfriend, actress Christa-Maria Sieland (Martina Gedeck), and wants to discredit the toast of the theater scene. 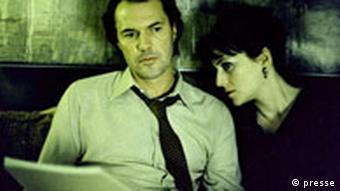 Wiesler and Stasi employees bug every room in Dryman's apartment -- including the bathroom -- and then set up a listening post in the attic. There, Wiesler and another man work in shifts, following every conversation or intimate moment and typing out detailed records of what they hear, no matter how banal.

While Wiesler begins the film as a committed Stasi man, even conducting classes for new secret police recruits about interrogation methods, cracks begin to form in his worldview as he immerses himself in the lives of the artists he is spying on. The sterility of his own overly fastidious life is highlighted as he discovers the richness in the world of the urbane playwright and his talented girlfriend.

In one scene, while Dreyman plays a sonata on the piano after a writer friend whose works have been banned by the regime kills himself, a tear rolls down Wiesler's face as he begins to realize how cruel and bankrupt the system he is supporting actually is.

In the end, Wiesler becomes Dreyman's guardian angel, protecting the playwright from the Stasi discovering he has written an article critical of the regime for the West German press. Wiesler pays a high professional price for his actions while Dreyman's personal life is shattered by the state.

Director Henckel von Donnersmarck, who was born in Cologne and grew up in New York and West Berlin and attended Oxford and the prestigious HFF film school in Munich, spent a year researching the topic. He spent time at the locations in the film, including the Stasi prison at Hohenschönhausen and the organization's headquarters -- both now museums.

"Locations are able to store up emotions," he said in an interview. "These visits often told me more as the many books I pored over through the years or the documentaries I saw." 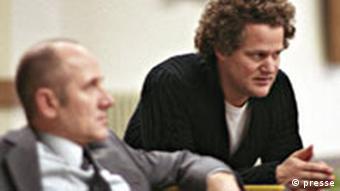 He also conducted interviews with many contemporary witnesses, including prostitutes who worked for the secret police, former prisoners, artists active in the GDR and even a former Stasi officer who headed one of the domestic spying divisions.

Finding locations was an important and difficult process, since the director had a very exact idea of the picture of the country he wanted to convey. That extended to the film's reductive color palette, which the director used to convey an authentic picture of the country in the 1980s. Eliminating blues and reds and using an abundance of browns, beiges, greens and grays paints a monotone picture of a country drained of vitality and tinged with underlying fear.

The film has been almost unanimously praised by critics and has already won four Bavarian film prizes. Last week, it was announced that the film had been nominated in 11 categories of the German Film Awards, including best picture.

While some who had personal experience with the Stasi have argued that the film's portrayal of the officer's transformation stretches credibility, most opinions have been positive.

"For me, this film marks the real beginning of a critical analysis of Germany's second dictatorship," Wolf Biermann, a songwriter and former dissident who was thrown out of the GDR in 1976, told daily Die Welt. "It's as if it had been taken from my own life."

Joachim Gauck, former head of the commission in charge of investigating the miles of Stasi files left after the fall of the Berlin Wall, described the film as a "journey into a lost world" that leaves any nostalgia behind.

"It's an important contribution to our dealing appropriately with the era," he said.

Too close for comfort?

For some, however, the film might be a too accurate look back at aspects of an era that they would prefer to forget. Sources at the film's American distribution company Buena Vista told kino.de's Mike Swain that the film is not doing as well in the eastern part of Germany as had been expected.

"There is still a cleft in the country," he said. "Buena Vista wanted the film running in as many places as possible all over Germany, but that's not happening in the east. Maybe it's still too early for some people there."

Jens Planner-Friedrich, who works at Bürgerbüro e.V., a group which helps those formerly prosecuted by the East German regime, said he is not surprised that this unvarnished look at the "real-existing socialism" of the time does not sit well with some.

"There are still a lot of people who don't want to be confronted with this part of the past," he said. "Many would prefer to just remember the nice aspects of life then. It's simply human."

For one member of the cinema audience at a recent screening of the film in an eastern neighborhood of Berlin, it was important to see both the good and the bad.

"Although I personally didn't have that kind of experience with the Stasi, I think the film showed it how it was," said the woman, who didn't want to give her name. "It's good that we now have a movie like this, but it's also good to have films that show the more positive side of life back then. There were two sides, you know."