It is German television's most expensive and lavish drama and yet critics have savaged "Dresden: An Inferno" as a missed opportunity with a maudlin, improbable love story at its heart. 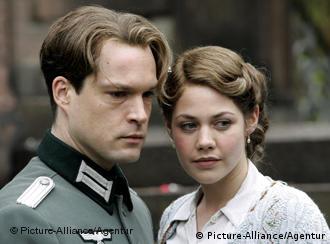 It was never going to be an easy job to make a slick and critically acclaimed two-part television drama about one of the most controversial bombing raids of World War II. But according to critics, the German makers of the wartime epic "Dresden: An Inferno" could not have made a bigger mess of the story if they had tried.

For filmmakers, the Dresden raid is one of the war’s last real taboos when it comes to the portrayal of the actual events before during and after the allied bombing mission on February 13, 1945 which left approximately 50,000 people dead in the eastern German city; a raid which is still regarded as a war crime by many Germans.

But popular opinion has it that the costliest production ever made by German TV, with a budget of 10 million euros ($12.01m) has forsaken the true horror of the events in favor of an improbable love story between a downed British pilot and a German nurse.

Millions of viewers tuned in on Sunday night to see the wounded hero, played by British actor John Light, survive a plane crash before walking into the heavily militarized city of Dresden and then seduce a benevolent nurse with a few moody looks before exposing a corruption scandal. 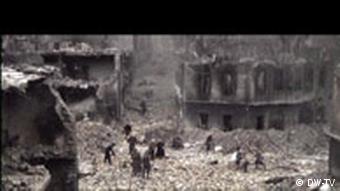 Dresden is again reduced to rubble in the ZDF drama

In the second half of the ZDF two-part mini series due to be shown Monday, the city of Dresden does get bombed but rather than dealing with the trauma on the ground and the crisis of conscience in the air, the story follows the two miss-matched lovers in their struggle to help each other as the firestorm rages.

Critics have slammmed the film, saying that an opportunity to make an important statement about the historical events has been missed and that treating the bombing as fiction shatters one of Germany's last historical taboos -- one which has so far only been dealt in very cautious black and white documentaries.

"Why does one wish that Dresden was never filmed?" asked Kerstin Decker, chief critic of Berlin's influential Tagesspiegel. "Because it makes a mockery out of suffering."

Evelyn Finger from the German weekly Die Zeit criticized the drama's "revanchist dynamic" and the relentless depiction of the Germans as victims. "It's perfidious. The revanchist message is packaged so beautifully you scarcely notice it. There are beautiful costumes. And aesthetically it's great. The problem is you end up sympathizing with the Germans, regardless of what they've done." 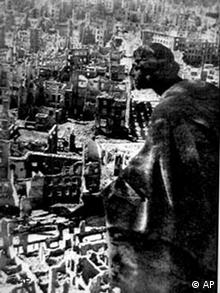 The Dresden bombing remains a taboo for many Germans

The maudlin love story has drawn particular fire. Anna, the German nurse played by Felicitas Woll, quite inexplicably turns to the British hero in distress after being saved from a firing squad by her doctor fiancée. There is then an unnecessary sex scene in a hospital ward filled with sleeping and horribly wounded patients. "We haven’t seen that even in hospital soap operas," Tagesspiegel’s Decker wrote.

"I didn't realize there was so much beautiful lingerie in Dresden in February 1945. They must have been able to do some wonderful things with parachutes," one British diplomat who saw the film observed dryly in the London daily Guardian. "It's a bit melodramatic. Downfall this isn't," he added, referring to the Oscar-nominated film dealing with Hitler's final days in his bunker.

Sir Peter Torry, Britain's ambassador to Germany, told the Hamburger Abendblatt: "I know that British pilots are not bad looking, but I find the love story a bit artificial."

Film makers on the defensive 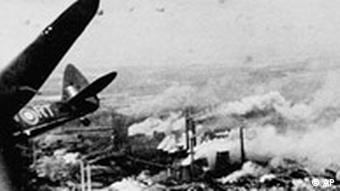 The makers of the film have been on the defensive ever since select previews triggered derisive responses last week. Sascha Schwingel, the film's producer, defended the central love story, even citing historical evidence to back up the inclusion of such a narrative. He said the thread was based on a true story of a British pilot shot down during the war who had fallen in love with a German nurse, later settling in Cologne.

"This is a fictionalized drama," he added. "It's important to tackle these themes for a younger generation of Germans, who don't watch documentaries and who have no memories of the war."

"We thought the story could only be told from a German-English perspective," said Nico Hofmann of Teamworx, which produced the mini-series. "Otherwise it ends up in the wrong political corner. Neo-Nazis have been stoking 60-year-old resentments about the bombing in order to win political support in Dresden."

Hofmann added his intention was to show a British pilot confronting the devastation wrought by his bombs, and disputes claims that the romance trivializes it.

Germany's first fictional movie about the Allied bombing of Dresden was screened at the Berlin Film Festival this week, in a fresh sign the country is finally confronting its own wartime suffering. (Feb. 18, 2006)

German TV Looks to US for Salvation

On Tuesday, the US hit TV series “Desperate Housewives” hits the airwaves in Germany. It’s the latest in American imports that German commercial networks, desperately looking for ratings and cash, hope will save the day. (April 12, 2005)

Struggling on the Road to Stardom

Germany is an increasingly attractive location for international film and television productions. But for those English-speaking actors based there, this does not mean life has suddenly become a bed of roses. (June 1, 2005)

German state broadcaster ZDF's pages on the "Dresden: An Inferno" production. In German only.