Berlin Plans New Spotlight for its Famous Wall | Germany| News and in-depth reporting from Berlin and beyond | DW | 27.06.2006

For years, tourists have wandered around Berlin looking -- sometimes in vain -- for the famous landmark that marked the divided city. But city officials are aiming to change that. 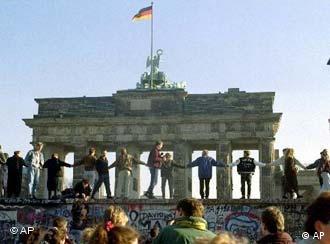 Almost two decades ago in Berlin, US President Ronald Reagan famously thundered: "Tear down this wall."

Those words proved prescient. Not long after, the Berlin Wall was indeed torn down, with bulldozers, picks and pocket knives, until there was little left of the hated structure that not only divided a city and tore apart families, but was a powerful symbol of a divided nation and a divided world.

There have been complaints that the city seems intent on erasing any vestige of the four decades of communist rule in East Germany. It is busy ridding itself of communist-era structures such as the Palace of the Republic and the Unter den Linden hotel. But now, in a nod to the past, city officials and preservationists have finally agreed on a 40 million euro ($50 million) plan to preserve and enhance what is left of the Berlin Wall.

"This is a crucial plan for the city," Berlin Mayor Klaus Wowereit told reporters. "This is the only way that the value and importance of democracy and freedom can be anchored in people's minds."

Tearing down the wall

The scenes from November 1989 were broadcast around the world. They showed jubilant Germans from both East and West Berlin jumping, dancing, cheering and hugging each other on both sides and on top of the wall. For them, it was a spectacular turning point 28 years after the first barrier went up which kept a population imprisoned and resulted in the deaths of at least 191 people trying to cross it. 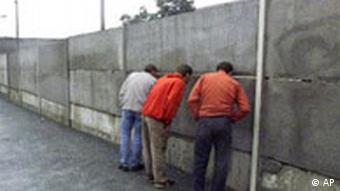 About seven months later, the official demolition of the wall began. East German soldiers and their West German counterparts brought in dozens of bulldozers, cranes and trucks, and for five months, dismantled the graffiti-covered structure, often recycling the material. About 250 large pieces were auctioned off and sold around the world, some ending up in department stores. Other smaller pieces were chipped off by German and foreign tourists, who were known colloquially as "wall peckers."

And what was left were six slabs around the city, and a path of cobblestones to connect them, passing through small streets and famous sites such as Brandenburg Gate and Bernauer Strasse, the only place in Berlin where building facades were part of the border and where dozens of people made dramatic jumps to freedom.

At the same time, a painful debate about the wall's preservation began. While many wanted to preserve its remaining sections as a reminder to future generations, others wanted all remnants of the symbol of the totalitarian state destroyed.

One of the first voices to argue for preservation was former Chancellor Willy Brandt in 1991. Later, a few city officials took up the cause. 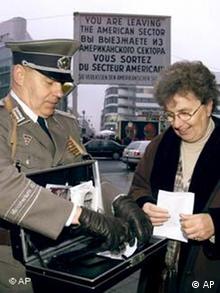 Checkpoint Charlie is the biggest of the Cold War attractions

"It is our duty to keep the proof of this madness to guard against any possibility of its return," Berlin Senator Volker Hassemer, who was responsible for urban development, told a 1995 conference on preservation in Berlin. "Soon, no one will believe such a thing was put into the middle of the city. We need the remnants of this horrible edifice as an enduring witness."

Christina Lauer of the Berlin Wall Documentation Center says that opinions about the wall changed gradually. After a while, officials began to see that the wall needed to be preserved. That change, she says, came as a result of pressure from everyday people, not academics or politicians.

"The first overall feeling was to rip it down, stamp on it," she said. "It took awhile to get a less personalized view and the needed distance to be able to look at it and figure out how we want to remember it."

These days, tourists throng to Checkpoint Charlie to experience the Cold War history of the city, amazed that more evidence of it isn't left.

"I was expected a dominating and impressive real wall, not a landmark," said Carlos Neuvo, a tourist from Costa Rica in Berlin for the World Cup who was visiting Checkpoint Charlie, a private museum at the location of the famous Berlin Wall crossing point. Fewer tourists go to lesser-known sites such as the East Side Gallery or the above-mentioned documentation center and memorial on Bernauer Strasse, which are further from the city center. Some express amazement that there is not one central site.

This is what city official would like to change.

"We want to bring the sites into prominence, and link them together into an integrated whole, a single concept," said Lauer, who added that many of the current sites began as small citizen initiatives. "We want to show how it affected the city and how it destroyed everyday life."

To do so, seven sites will be highlighted: 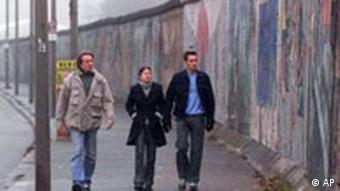 First opened in 1999, it includes the Chapel of Reconciliation, the Berlin Wall Memorial and the largest section of the wall. It will remodelled and expanded. An interactive multimedia site for visitors is planned.

A new exhibition at the gate will be located in a hall in the subway system and is meant to focus on the peaceful revolution which brought down the GDR system and led to the dismantling of the wall.

An exhibition at an adjacent building site next to Checkpoint Charlie will aim to commemorate the Cold War confrontation of the superpowers and how the city and the world were divided.

The site of the former headquarters of the Gestapo, the area will host an exhibition to show the two layers of history on this spot, and how the Third Reich and the GDR communist regime were connected.

Both sides, which document the deaths of fleeing East Germans, focus on the West's view of the wall and how artists approached it after its fall. 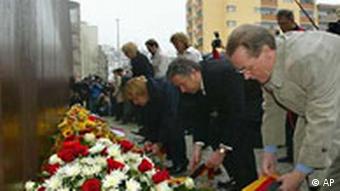 The train station will feature an exhibit showing how the city's public transportation system was divided, sometimes with eerie results. Nordbahnhof station was one of the "ghost stations" that West Berliners travelled through but couldn't disembark at. From the train, they could only see a dimly lit platform, empty but for a few GDR border guards.

The initiative also includes setting up a series of markers at sites pointing the way to the other locations. Public transportation routes are planned to make access easier and a special "wall" ticket will be available. The project is scheduled to be completed by August 13, 2011, the wall's 50th anniversary.

A new memorial to the victims of the Berlin Wall was inaugurated on the grounds of Germany's lower house of parliament, Berlin's Bundestag, on Thursday. (Sept. 30, 2005)

More than 1,100 people died trying to escape the former East Germany, according to new research by a prominent victims group presented Tuesday ahead of the 44th anniversary of the building of the Berlin Wall. (Aug. 9, 2005)

Although very little remains of the Berlin Wall, a new government Web site details where visitors can find parts of the despised Cold War barrier and many other remnants of the city's divided past. (July 19, 2005)