Constructing the Berlin Wall | Germany| News and in-depth reporting from Berlin and beyond | DW | 13.08.2006

Aug. 13 marks the 45th anniversary of the construction of the Berlin Wall, which became the symbol for the division of Germany until its fall in 1989. Check out DW-WORLD.DE's special dossier with eyewitness accounts. 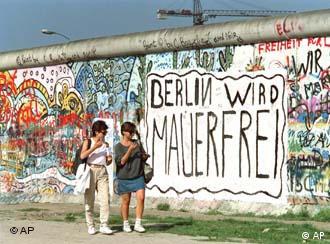 Remnants of the Wall today

It could have been an uneventful, hot Sunday in summer, remembered by Berliners as a nice day at the lake or a fun afternoon with relatives over coffee and cake. But Aug. 13, 1961 became a date that entered the history books around the world as the East German communist regime began to erect a virtually impermeable border around the western part of the city.

For the next 28 years, the Berlin Wall stood as a silent reminder of Germany's division and the GDR's declaration of bankruptcy as a state that could only hold onto its citizens by locking them in.

To mark the 45th anniversary of the construction of the Wall, DW-WORLD.DE has put together this dossier, which includes interviews with eyewitnesses -- a West Berliner, an East German and a US soldier, a story on the rebirth of Berlin's central Friedrichstrasse, a visit to the famous Checkpoint Charlie museum and the latest study on the number of people who died trying to cross the Wall.

Click on the links below to find out more, and review the Wall's history in our picture gallery.

On the day the Berlin Wall was built, Elke Kielberg waved at her great aunt across the barricades. It would be more than two years before she would be able to meet her and the rest of her family in East Berlin again. (Aug. 13, 2006)

On Aug. 13, 1961, Hartmut Richter had planned to go swimming with his cousins. He did so eventually, but not before becoming an eyewitness to the beginning of the division of East and West Berlin. (Aug. 13, 2006)

From suburban street to business and entertainment district to stage for a Cold War standoff, Berlin's Friedrichstrasse has played many roles in the city's history. DW-WORLD takes a stroll down this storied street. (Aug. 12, 2006)

Forty-five years after the Berlin Wall was built, researchers still can’t say for sure how many people were killed trying to cross it. So far, 125 deaths have been confirmed, but further cases are being investigated. (Aug. 9, 2006)

The Berlin Wall's Checkpoint Charlie border crossing came to symbolize the Cold War divide. Now, it is home to a memorial of the division of Berlin, putting a face on those who risked their lives to leave communism. (Aug. 13, 2006)

A History of the Berlin Wall

Read about the construction of the Berlin Wall on DW-WORLD.DE's special historical Web site