From suburban street to business and entertainment district to stage for a Cold War standoff, Berlin's Friedrichstrasse has played many roles in the city's history. DW-WORLD takes a stroll down this storied street. 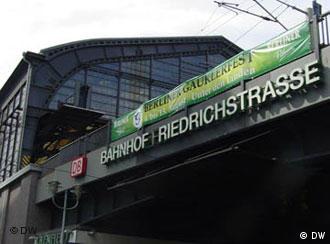 One needs a vivid imagination to peel back some of the thick layers of history that cover Friedrichstrasse and have a look inside. It also helps to have a history book.

The street, one of Berlin's most famous, has been convulsed by events, and even by bombs, that have befallen the city. They've never killed its spirit, but they have sent it staggering. Still, the street always seems to get up, dust itself off and get back to business -- kind of like the city itself.

Friedrichstrasse's 3.5-kilometer (two-mile) north-south route runs through the heart of the city, and it's been said that the street sums up Berlin -- with its highs and lows, glitter and grit -- better than any other thoroughfare.

Today's street has a rather humble beginning at its southern end. The square called Mehringplatz was known as the Rondell in the early 18th century, when Friedrichstadt, the district around Friedrichstrasse, was first constructed outside the city walls. The Rondell was a circular plaza modeled on Rome's Piazza del Popolo, whose column in the center marked the southeastern limit of the city's extension. It was a quiet area; the peace of the bourgeois homes that lined the suburban idyll were not much disturbed save for the occasional regiments who drilled on the Rondell's parade grounds.

A few centuries, and much development, later, Friedrichstrasse's southern end found itself reduced by World War II bombing raids to a field of mud, populated only with a few skeletal remains of bombed-out buildings. Sixty years after that, it has yet to fully bounce back from that particular stroke of fate.

Mehringplatz has kept its circular form thanks to two massive, joyless apartment blocks built in ring form around the plaza, but comparisons with the Eternal City's famous circular square end there. Concrete and a late-sixties design aesthetic are the dominant motifs here. 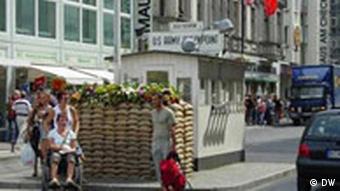 Beginning the walk north, the signs are also not auspicious. A few ethnic food markets, a down-at-heel Internet café and "for lease" signs in empty store windows reflect the economic difficulty this part of town still finds itself in.

But two blocks up, at Kochstrasse, the scene changes dramatically as you reach the spot that put the street in the global spotlight. On Oct. 27, 1961, just over two months after the Berlin Wall split the city in two, US and Soviet tanks found themselves facing off at the Checkpoint Charlie crossing point from West to East Berlin, which had been established where the barrier cut Friedrichstrasse in two.

Both tanks had live ammunition on board, and both had orders to return fire if fired upon. From 5 p.m. on Oct. 27 until 11 a.m. the next morning, two worldviews tried to stare each other down. The resolution was peaceful, if uneasy, and it cemented Friedrichstrasse's place in Cold War history. 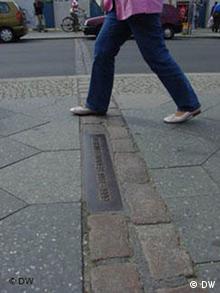 Today, the wall is gone, only a trail of bricks embedded in the pavement and sidewalk trace the path of the former barrier. The barbed wire has disappeared, but the memories remain, and a stop at the privately run House at Checkpoint Charlie museum is a must for most tourists.

Now instead of soldiers standing with rifles ready, vendors hawk faux eastern military paraphernalia, and actors dressed up in military uniforms pose for photographs in front of a mock-up of a guardhouse, complete with sandbags. 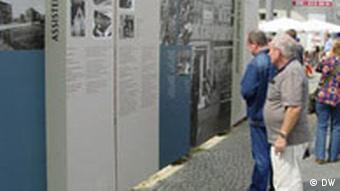 Tourists read the history of the city's Cold War division

Cafés and souvenir shops line the street instead of boarded up windows and slightly nervous western tourists preparing to hand their passports to East German border guards before crossing over to the GDR. Today's tourists fill their time reading the new information panels that have gone up explaining the history of the city's division.

Pull out your credit cards

Wandering further north, and crossing into what was once East Berlin, Friedrichstrasse starts regaining some of the glitter that made it Berlin's traditional business and entertainment center. After reunification, money was poured into refurbishment projects to rebuild and renovate where East German neglect had left its mark. 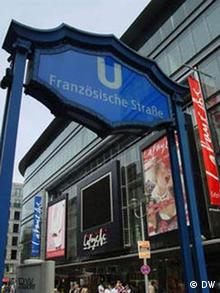 At the beginning of the 20th century, the street was a bustling marketplace, especially for gold and precious gems. There were fashionable restaurants, hotels, business headquarters and banks. It was the city's pleasure palace, not only because it was called the "street of 107 cinemas," but also because of the many prostitutes who plied their trade here.

While businesspeople in the heady years after reunification might not have had the return of the working girls in mind, they did hope to bring back some of the street's economic vitality. Architects flexed their imaginations as glittering new buildings went up and developers waited eagerly for the expected onslaught of tenants. The hordes did not come.

More than 1.1 million square feet (100,000 square meters) of upscale retail space was built in Friedrichstrasse in the 1990s. But much of it has remained unleased and original rent estimates on price per square meter have fallen by half. 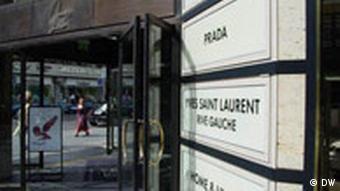 Not for the faint of heart, or weak of credit card

Still, the upscale boutiques and department stores moved in -- Louis Vuitton, Gucci, Galleries Lafayette, Bang & Olufsen, to name just a few -- and as Germany's economy has begun to recover, they're filling up again (even though without the nouveau riche Russian tourists, many might have a hard time staying in business).

Historic photographs of the street show casual strollers, elegantly dressed women and office clerks jostling one another on the narrow sidewalks as trams and horse-drawn buses rolled by. Now, the scene has almost come full circle, keeping with the times. Today, tourists, wealthy matrons and besuited professionals weave and dodge one another as modern vehicles ply the road, surprisingly narrow for such an important artery, and often jammed up.

Further north, Friedrichstrasse crosses Berlin's grand Unter den Linden boulevard and then meets the train station that bears its name. Built in 1882, it was soon the capital's most important station although during Cold War, it became a symbol for the partition of the country and the separation of families on two sides of the ideological divide. 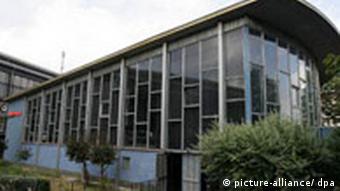 Scene of many a sorrowful farewell -- the "Palace of Tears"

Then, what had been a through station became a terminus for travelers from the two sections of the city. It was the only link for mainline, suburban and underground trains and a sluice between the two worlds. Westerners could use the station, although it was in East Berlin, since several western suburban rail (S-Bahn) and underground lines used it. They could transfer between lines without leaving the station.

Those Germans with the right papers could enter East Berlin here, going though a customs hall that -- due to many sad farewells visiting westerners had to bid family and friends here -- became known as the "Palace of Tears" (Tränenpalast).

After unification, the Tränenpalast became a popular events venue. But, in another sign of Berlin's continuing transformation, it has hosted its last concert and will be torn down for a multi-story office building that will take its place.

A century ago, the most northern section of Friedrichstrasse, just over the Spree River, was a lively bar and club district. Almost every second building housed some sort of entertainment venue, including numerous brothels. 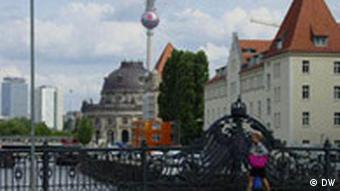 North of the river, Friedrichstrasse traditionally really got fun

Since the 19th century the area has attracted theater fans, drawn to the dense conglomeration of stages in the areas. The options run from high-concept and classical works at the Berliner Ensemble -- founded by playwright Bertold Brecht in the 1950s to present his plays -- to political cabaret at the Distel Theater, all the way to lighter fare at the Friedrichstadtpalast, where the costumes and spectacle take center stage.

Friedrichstrasse ends a few blocks further north, amid cafés, pubs and scaffolding as the street continues its long makeover. It stops at Oranienburger Tor, a gateway to another nightlife district that came into its own after the Wall tumbled. It's mostly favored by tourists these days; Berlin residents have largely moved on to other neighborhoods. 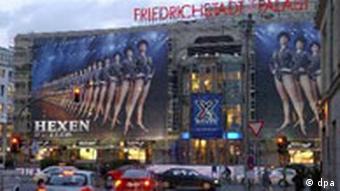 Some have called Friedrichstrasse Berlin's own Champs-Elysées. The comparison seems inaccurate, although that is not meant to belittle the German thoroughfare. True, Friedrichstrasse lacks the grandeur and classical beauty of the Parisian boulevard, but it makes up for it in its history, its sheer variety and its Phoenix-like rise from the ashes of war and Communist neglect.

Like Berlin, it has often been on the losing side of history and has the scars to show for it. But also like Berlin, it has emerged from the trauma of the 20th century perhaps a little shaky on its feet, but determined to find its place in the 21st.

Bertolt Brecht's "Three Penny Opera" is supposed to open Friday in Berlin, 50 years after the playwright's death. There's just one problem: the newly renovated theater isn't safe for the public yet. (Aug. 10, 2006)

Finding Traces of the Wall in Berlin

Friday marks the 43rd anniversary of the Berlin Wall's construction. Recently, the city has rushed to preserve the remains of the Cold War symbol for the sake of history and curious tourists. There's still plenty to see. (Aug. 13, 2004)

Once a popular choice for distinguished guests of the East German government, the Hotel Unter den Linden in central Berlin is now the latest Soviet-style building to be slated for demolition. (Feb. 10, 2006)