Finding Traces of the Wall in Berlin

Friday marks the 43rd anniversary of the Berlin Wall's construction. Recently, the city has rushed to preserve the remains of the Cold War symbol for the sake of history and curious tourists. There's still plenty to see. 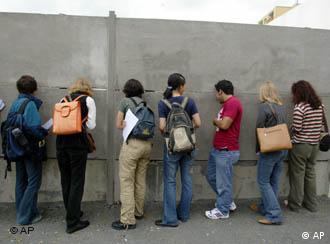 The Berlin Wall used to keep people away. Now the clamor to find it.

A busload of tourists with cameras slung around their necks are emptied near the famous "wall museum" at Checkpoint Charlie in East Berlin. Amid the excited babble of voices and whirring of cameras, the question "So, where is the Wall?" is bound to be heard.

Forty-three years after construction of the Wall began and 15 years after it was hacked and demolished to roars of hearty approval, nothing appears more fascinating to visitors to Berlin than to see for themselves the wall that once sliced the city.

So, where's the wall?

Peter Wess of the city sightseeing company Berlin Starting Point told DW-WORLD that "there’s a huge interest in the Berlin Wall," especially among tourists from English-speaking countries and in particular the Americans. "They aren’t too interested in Prussian history, but rather German history of the 20th century, and The Wall is one of the most important themes," he said. 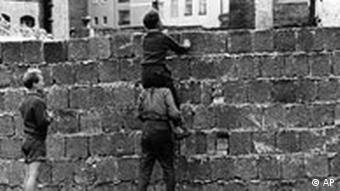 Construction of the Wall began in 1961.

But tourists to Berlin need to have a good imagination to try and visually reconstruct the 43.1 kilometer concrete structure that once ran through the German capital and divided its people. However, no imagination is needed to recall the ways in which the Wall had a devastating effect on the lives of East Germans. More than 75,000 people were imprisoned for trying to escape, and a total of 239 people were killed trying to get over the Wall during its 28-year history. Only 5,043 managed to escape. 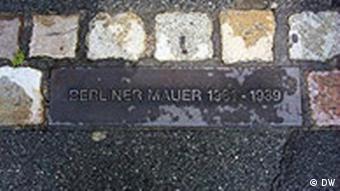 In some parts of Berlin, small stones and plaques are the only remaining reminders of the city's Cold War history

All that’s visible today is a double row of cobblestones in some parts of downtown Berlin to mark the original route of the wall, a few memorials and plaques and truncated scraps of graffiti-splattered wall.

Bernauerstrasse -- the street that marks the boundary between the Mitte district, which was part of the Soviet-occupied sector, and the French-controlled Wedding neighborhood -- was a closed and heavily guarded border as well as the scene of several escape attempts from the east to the west. Today it houses the Memorial of Division, which includes a 70-meter section of the original wall and a documentation center about its history.

A short distance away, the Invalidenfriedhof cemetery also houses some stretches of the Wall as well as a guard post tower. A large number of graves in the cemetery were moved during the Cold War to make way for watchtowers and a tarmac-covered strip. 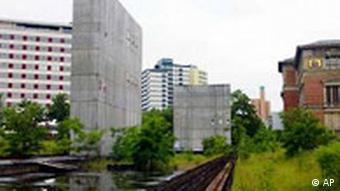 The Topography of Terror Memorial in Berlin

Peter Wess says that another important part of the original Berlin Wall is the 200-meter-long stretch in the Niederkirchnerstrasse that once marked the border between the eastern district of Mitte and the western district of Kreuzberg. This bit of the Wall has now been preserved as the northern-most tip of an exhibition at the site of the former Gestapo headquarters called the Topography of Terror. Both wall and exhibition serve to document the inhumanity mankind is capable of.

Better known remnants of the wall

A popular destination for Cold War sleuths and one that finds mention in every available city guide on Berlin is the Checkpoint Charlie Museum on Friedrichstrasse. 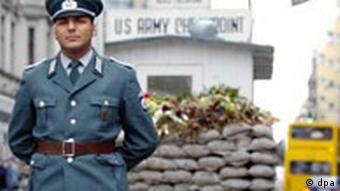 Once a pre-fabricated monitoring tower erected by the Allies in the American sector after the erection of the Berlin Wall, it today houses a museum on the history of the wall and exhibitions on human rights. The souvenir shop here also sells pieces of the Wall, a hot-selling item among tourists.

To the west of the museum lies the East Side Gallery in the Mühlenstrasse, the largest surviving chunk of the wall. It is a full 1,300 meters long and also a massive open-air art gallery. After the Wall was opened in 1989, hundreds of artists from all over the world transformed a plain eastern side stretch of it into a drawing-board for their art. The result is a spectacular display of color and shapes on what was once gray concrete. 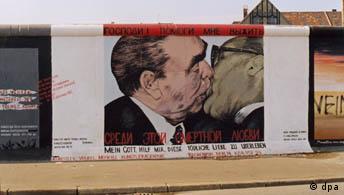 City wakes up to the potential of the Wall

Realizing the tourist magnet that the last bits of the Wall had become, city authorities put them under the monument protection act and thus took responsibility for their preservation and restoration.

Petra Rohland, spokeswoman for the Senate Administration for City Development told DW-WORLD that "we’re trying to integrate the last remains of the Berlin Wall in the city profile – as an admonishment as well as proof of a living history.

She admits that the city's coffers are empty, so there can't be any "luxurious restoration" of the Wall. But she says that the interest in the Berlin Wall world-wide is so overwhelming that "there are always some takers for shouldering the costs."

A Difficult Birthday for Berlin

Germany marked the construction of the Berlin Wall on Friday, 43 years after the structure was erected that prevented people from leaving communist East Germany. (Aug. 13, 2004)