In Berlin, Another Communist-Era Building Bites the Dust | Germany| News and in-depth reporting from Berlin and beyond | DW | 10.02.2006

Once a popular choice for distinguished guests of the East German government, the Hotel Unter den Linden in central Berlin is now the latest Soviet-style building to be slated for demolition. 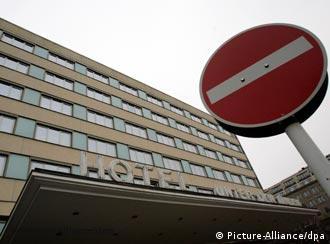 In the Hotel Unter den Linden on Berlin's famed boulevard of the same name, everything seems like business as usual. Guests speaking a multitude of languages lounge in the lobby's comfy yellow chairs, and the doorman in his gold-buttoned jacket is kept busy by a steady flow of people.

But the plaza outside the hotel looks curiously empty. Where once a gaggle of trees sprouted from the paving stones, now there are just freshly shorn stumps -- a sign of the fate awaiting the concrete block hotel that was built under the former East German government, and once housed prominent guests of the regime.

But this particular change is moving ahead at breakneck speed, in part because of pressure to have the historic boulevard in presentable shape by June, when Germany hosts the World Cup soccer tournament.

Demolition of the hotel is due to begin on March 1 and to be completed by mid-May. During the World Cup, the city plans to erect a giant screen on the empty lot at the corner of Unter den Linden and tony Friedrichstrasse, where crowds of spectators can follow the matches.

The schedule means that the Hotel Unter den Linden will have to close its doors by the end of February -- something that has saddened its staff as well as many tourists. In GDR times, the hotel was a chic and somewhat expensive choice, but in recent years, it became a popular choice with students, seniors, tour groups and families, who appreciated the availability of rooms starting at 57 euros ($68) in such a central location.

"Our guests are really sorry that the hotel is being torn down," one of the receptionists said. 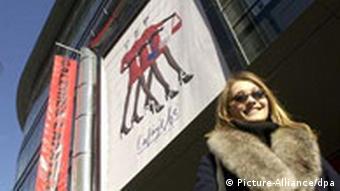 Friedrichstrasse is now home to upscale stores like the Galeries Lafayette

And in an online forum about the demolition, one former guest complained that she and others like her unable to pay upwards of 150 euros a night for a hotel would no longer be welcome in the area, now burgeoning with luxury shops and flashy auto showrooms.

Another forum user commented that the plans are just another example of how "the Germans have little tact when dealing with their history."

"Everything that comes from the East and wasn't already around during the Kaiser Wilhelm era is being torn down," wrote Mark H.

Palace of the Republic soon to go 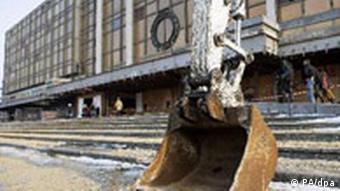 The days are numbered for Berlin's Palace of the Republic

The hotel will hardly be the first East German building to give way to the wrecking ball. The most prominent example is the former seat of the East German government, the Palace of the Republic. After a heated debate lasting more than a decade, its demolition is due to begin this month.

The discussion about the fate of the Palace polarized Berliners and prompted a wider debate about how the city should deal with the architectural reminders of its varied, often tragic, past.

Those in favor of tearing down the Palace and other communist-era constructions, argue that the buildings are symbols of a repressive regime and are unworthy of the pride of place they currently enjoy in central Berlin. The city would do well, they say, to get rid of these "eyesores" if it's serious about becoming a European capital on a par with London or Paris.

But those on the other side of the debate say it's precisely because of what the buildings represent that they should be retained.

Hope Harrison, expert on European affairs at George Washington University and author of "Driving the Soviets Up the Wall," a book dealing with the Soviet and East German decision to build the Berlin Wall, said it's important for public officials dealing with such issues to be more sensitive.

"It's still living history," Harrison said. "There are a good number of people still alive today who were East Germans. It's too narrow to say that because the buildings are symbols of a repressive regime, they should be torn down." 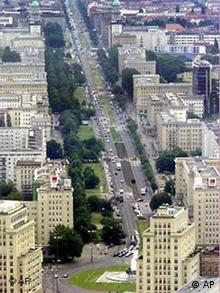 Harrison was once a guest in one of the hotel's small, Soviet-style rooms, and said that while it would be hard to argue on the basis of comfort that the hotel should stay, "you certainly felt like you were touching history by sleeping there, and not all hotels can offer that."

Having spent time in Berlin as a research fellow at the Freie University, Harrison is hopeful that the city will find a way to modernize itself, while retaining the traces of its history that are such a draw, especially for foreign tourists. But she added that the city seems unable to resist politicizing its recent history when making planning decisions.

"There's been some effort to get this issue outside the political process and look at it from a long-range perspective," Harrison said. "But communism is politicized more so than other recent history. People are trying to muddle through, caught between different arguments from different interest groups, and the outcome may end up not satisfying anyone."

Fifteen years after the fall of the Wall, Berlin's culture commissioner has a blueprint to unite the city's scattered Cold War remnants into a coherent memorial concept and give tourists a real feel of the dark chapter. (April 19, 2005)

Berlin's city authorities have announced that demolition of communist East Germany's so-called Palace of the Republic in the heart of the city will begin shortly, despite continuing opposition. (Jan. 6, 2006)