On the day the Berlin Wall was built, Elke Kielberg waved at her great aunt across the barricades. It would be more than two years before she would be able to meet her and the rest of her family in East Berlin again. 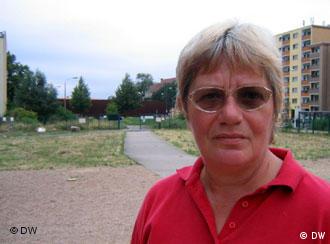 Born in 1949, Elke Kielberg has always lived in a side street of Berlin's Bernauer Strasse, which was divided when the Wall was built. She used to work as a nurse and now volunteers as a custodian at Bernauer Strasse's Chapel of Reconciliation, which was erected in the former death strip after reunification. 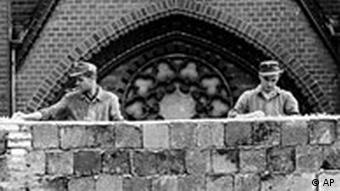 Two East German workers put broken glass atop the wall in August 1961. The church behind them was later blown up and is now the site of the Chapel of Reconciliation

Elke Kielberg: I was at home. Like every Sunday, my mother had gone to buy the newspaper on Bernauer Strasse and came back in an agitated state to tell us what was happening -- that the streets had been blocked with rolls of barbed wire. After breakfast, we went down to the train station to meet my great aunt, who lived in East Berlin and was meant to come for a visit. She was standing behind the barricades and we were standing on the western side and the only thing we could do was wave at each other. It was a horrible shock for us. My cousin, who grew up in the East, had been like a sibling to me, because somehow we were always together. We knew East Berlin and went there regularly -- to the family grave at St. Elisabeth cemetery or to take a walk near the Märchenbrunnen (a fountain) in Friedrichshain park. We always wanted to do that again, but it wasn't possible anymore.

What was it like to live so close to the Wall? 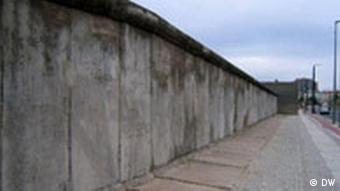 The remains of the Wall

People are prone to becoming indifferent. You walked past it and didn't see it any more. It was there, we knew it divided the East and the West, but you really only noticed it consciously again when state visitors such as Lyndon B. Johnson and Robert Kennedy and John F. Kennedy were brought to Bernauer Strasse. In the beginning, you could still see people jumping out of windows.

How did that make you feel?

As a teenager, I was euphoric. I ran upstairs and talked about how an old lady was dragged from above and pulled from below and thought that it was great that she managed to escape. 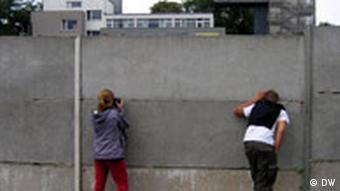 I was still working in the hospital and had a late shift. I didn't realize what was going on. I first thought that it wasn't possible, that I was crazy. The next couple of days, I had to walk to work because public transportation was so crowded and when I tried to get money at the bank there were endless lines of people waiting to receive their "welcome money" (ed.: Every GDR citizen was entitled to 100 deutsche marks). That's when it hit me -- and, of course, when my cousin was standing at our door, with her family.

Do you think there's still a division between East and West?

It's still present in a lot of heads and I don't think that's going to change in our generation. My cousin was pro-western, but she grew up and went to school in a different system. But the next generation -- her daughters and her grandchildren -- that's where it's more or less disappeared.

On Aug. 13, 1961, Hartmut Richter had planned to go swimming with his cousins. He did so eventually, but not before becoming an eyewitness to the beginning of the division of East and West Berlin. (Aug. 13, 2006)

More information on the chapel