Two US soldiers, a Pentagon civilian and a military contractor have been killed in a bomb blast in Manbij, Syria. Speaking after the attack, US Vice President Mike Pence said the "Islamic State" "has been defeated." 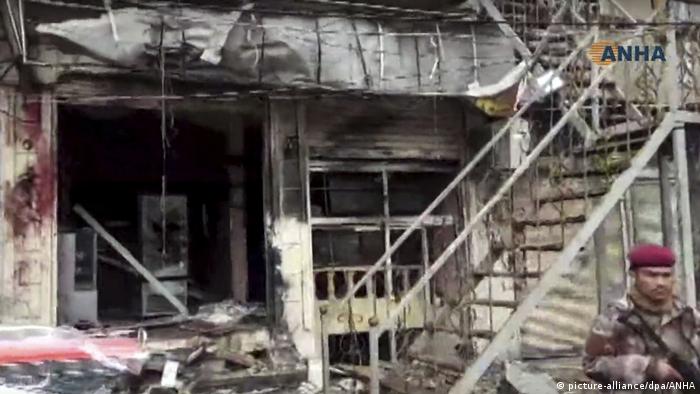 Two US soldiers, a Defense Department civilian and a military contractor were killed in a bomb attack on a restaurant in the northern Syrian city of Manbij on Wednesday.

The Pentagon said: "US service members were killed during an explosion while conducting a routine patrol in Syria today. We are still gathering information and will share additional details at a later time."

Reuters news agency quoted eyewitnesses who claimed that the US soldiers were meeting with local US-backed militia representatives at the restaurant at the time of the attack. The witnesses said, "An explosion hit near a restaurant, targeting the Americans, and there were some forces from the Manbij Military Council with them."

The Syrian Observatory for Human Rights, which is based in Britain and works with a network of locals in Syria, said 16 people were killed and several others injured in the suicide bombing. The terror group "Islamic State" (IS) claimed responsibility for the attack.

The attack came less than one month after US President Donald Trump made the surprise announcement that he would immediately withdraw the remaining 2,000 US troops from Syria. Trump, who has described Syria as nothing but "sand and death," said troops were being pulled out because IS had been defeated.

Although troops remain in place, some equipment has been taken out of the country. Trump's announcement led to the resignation of Secretary of Defense James Mattis, as well as drawing strong condemnation from the US' Kurdish allies in the region.

No mention of the deaths in Pence speech

Delivering a strategic outline of US foreign policy at the State Department Wednesday afternoon, Vice President Mike Pence made no mention of the attack despite having been briefed about it before making his speech.

Instead, Pence told those present that, "The caliphate has crumbled and ISIS has been defeated."

Some of the diplomats present said they were dismayed by the tone of Pence's speech, with one saying, "We're not used to being at campaign rallies."

The vice president later said that both he and Trump condemned the attack.

Manbij, on Syria's Turkish border, was liberated from IS control by Kurdish-Arab Syrian Democratic Forces (SDF) with help from the US-led coalition in 2016. Yet ongoing Kurdish control of the city has angered Turkey, which sees the Kurds as terrorists. Ankara has been openly planning a military offensive on Kurdish forces further east, but the presence of US troops in the region has kept them from doing so thus far.

Syria's civil war is now in its eighth year. In that time roughly half a million people have been killed and half the country's population driven from their homes.