The Kurdish-led Syrian Democratic Forces have condemned Washington's decision to withdraw forces from Syria. Turkey has threatened to rout Kurdish militia who played a leading role in fighting the "Islamic State." 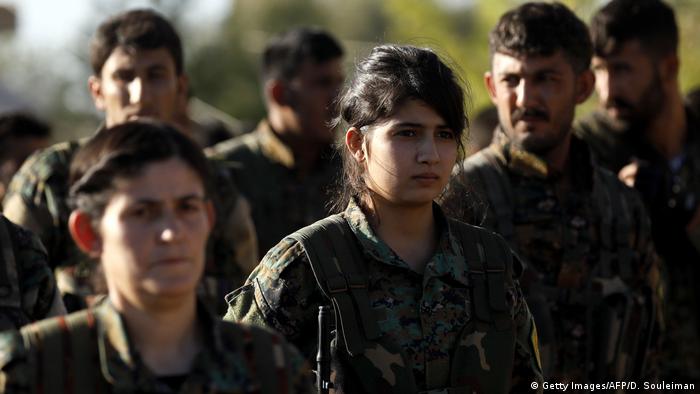 In a strongly worded statement, the Syrian Democratic Forces said the US withdrawal of its forces from Syria would have dangerous repercussions.

The announcement by US President Donald Trump has rattled Kurdish leaders, who fear it could help the self-styled "Islamic State" (IS) to regain a foothold. They also expressed concern about Turkey, which had threatened to rout Kurdish forces east of the Euphrates River.

"It was a surprising, and shocking step that leaves a bitter taste in the mouth of all Syrians, especially the Kurds," SDF media director Mustafa Bali told DW. "It is not compatible with the course the Americans signed up to in the war on terror."

The SDF said it would continue to fight IS in eastern Syria, but that they would freeze operations in the event of an attack by Turkey.

"We fought before the Americans arrived in northern Syria, and we'll fight after they withdraw," Bali said. "We battle terrorism due to ethical principles and the conviction that everyone in northern Syria is threatened by terror."

Turkey views the Kurdish People's Protection Units, or YPG — which form the main component of the SDF — to be an extension of the outlawed Kurdistan Workers' Party (PKK), classed as a terrorist group by Turkey and several Western allies. US forces have, until now, served as a buffer between Turkey and the militia.

The SDF also hinted that the US pullout, which many see as a betrayal of a loyal ally, could make Syria's autonomous Kurdish administration less likely to keep its IS prisoners in custody.

"If Turkey attacks, it will affect the fate of these prisoners," SDF spokesman Mustefa Bali told the AFP news agency. "Turkey may target these prisons as it tries to release these terrorists."

Turkey has vowed to move against Kurdish forces east of the Euphrates, with Turkish Defense Minister Hulusi Akar on Friday saying the militia would be "buried in their ditches."

"The biggest benefactor of this decision is [Turkish President Recep Tayyip] Erdogan," Rami Abdel Rahman, who runs the UK-based Syrian Observatory for Human Rights, told DW. "The US has decided to make Turkey's day."

"Turkey was able to play several cards wisely of late, such as the murder of journalist Jamal Khashoggi and the continued presence of jihadi groups in Syria," Rahman continued. "But the US withdrawal won't just plunge the country further into chaos, it will also intensify the ethnic tensions between Arabs and Kurds."

Rahman also told DW that roughly 1,500 active IS fighters were still present in the region, plus thousands of sleeper cells. He said that the Kurds' options were limited: either seek closer alliances with European powers like the UK, France and Germany, or consider allowing Bashar Assad's forces into the region to dissuade Turkey from military action.

US President Donald Trump announced the pullout of the US-led operations in Syria in a tweet on Wednesday, to the surprise of European allies.

Britain, Germany, and France also appeared to dispute Trump's claim that IS had been defeated.

The vice chair of Germany's Kurdish advocacy group the KGD, Mehmet Tanriverdi, expressed shock at the US decision.

"It will not lead to a solution for the region when it comes to security," Tanriverdi told DW.

"Since the beginning of the civil war in Syria, the Kurds have fought successfully against the so-called Islamic State," he said, adding that they had sustained thousands of casualties. "The withdrawal is wrong. It will destabilize the situation. IS has not been smashed."

"The withdrawal of US troops from the region would open up the way for Erdogan and his troops," said Tanriverdi, citing Turkey's occupation of the previously Kurdish-held town of Afrin earlier this year.

Such an occupation, said Tanriverdi, would create "thousands upon thousands" of refugees.