Rights activists have expressed their disappointment over Aung San Suu Kyi's speech on the Rohingya crisis. DW looks at why the democracy icon has struggled with discussing rights abuses in Rakhine. 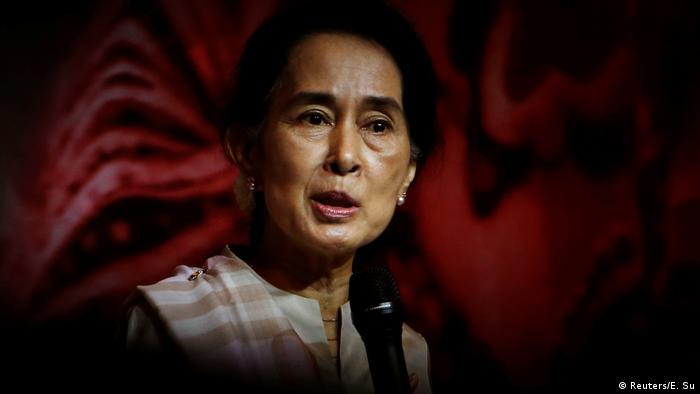 Aung San Suu Kyi, Myanmar's de facto leader and the Nobel Peace laureate, finally broke her silence on the military operation in the western Rakhine state that has sparked global condemnation in the past few weeks.

Suu Kyi, however, spoke about the unfolding humanitarian crisis in Rakhine in general terms, while mentioning nothing specific about the plight of the Rohingya Muslims, thousands of whom have fled to Bangladesh since the start of the latest wave of violence on August 25.

"We condemn all human rights violations and unlawful violence. We are committed to the restoration of peace and stability and rule of law throughout the state," Suu Kyi said in Myanmar's capital, Naypyidaw.

Suu Kyi said she "felt deeply" for the suffering of the civilians who were caught up in the conflict and that she wanted to end the suffering as soon as possible.

"We are concerned to hear the number of Muslims fleeing areas to Bangladesh," she said, condemning any "human rights violations" that may have exacerbated the crisis. She asked for the international community's help to finding a solution, adding that Myanmar did not fear international scrutiny.

Suu Kyi nevertheless invited diplomats to visit Rohingya Muslim villages in her speech, insisting that most had not been affected by the violence.

"The majority of Muslims have not joined the exodus," she said. "We want to find out why this exodus is happening." 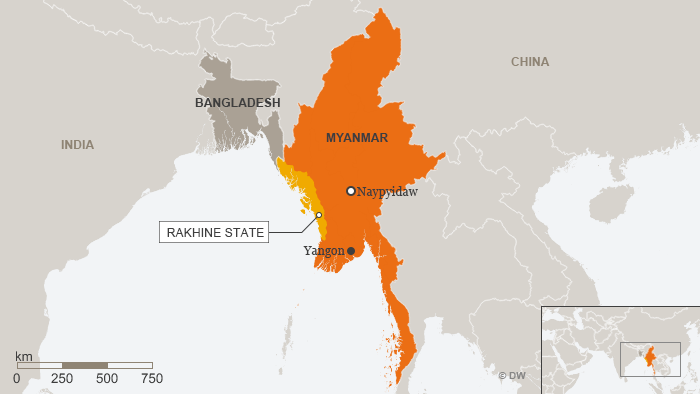 'Burying their heads in the sand'

James Gomez, regional director for Southeast Asia and the Pacific for Amnesty International, expressed his disappointment over Suu Kyi's reaction to the situation.

"Aung San Suu Kyi today [Monday] demonstrated that she and her government are still burying their heads in the sand over the horrors unfolding in Rakhine State," Gomez said.

Responding to Suu Kyi's claim that the military operation against Rohingya militants ceased earlier this month, Phil Robertson of Human Rights Watch said, "If that is true, then who is burning all the villages we've seen in the past two weeks?"

Paul Edwards, UNICEF deputy representative in Myanmar, said it was difficult to comment on the ground situation as Myanmar's government blocked access to international monitors in Rakhine state.

"We have to take at face value what she said about there being no further military operation since September 5. But of course none of us really know what's happening there if we're not there," said Edwards.

But Andrew Kirkwood, director and Myanmar representative of the United Nations Office for Project Services, welcomed Suu Kyi's announcement that diplomats could finally travel to Rakhine to assess the situation.

"I think that that is a positive statement and we wait to see what follow-up there is," Andrew said.

On Sunday, UN Secretary-General Antonio Guterres said Aung San Suu Kyi, had one "last chance" to end the violence in the west of the country that has caused a refugee crisis along the Myanmar-Bangladeshi border.

"She has a chance, she has a last chance, in my opinion, to do so."

He warned that "the tragedy will be absolutely horrible," if Suu Kyi and the influential Myanmar military do not solve the crisis soon.

The number of the Muslim Rohingya refugees in Bangladesh has topped 410,000, according to the UN Children's Fund (UNICEF). Thousands more arrive every day, the UN said on Sunday.

Suu Kyi cancelled a planned trip to the UN in New York on Wednesday. Her spokesman, Zaw Htay, cited "Rakhine terrorist attacks" for the decision.

The Rohingya are an ethnic minority in Myanmar, which originates from the Indian sub continent. For several centuries they have lived predominantly in Myanmar's western state of Rakhine - also known as Arakan. They are predominately Muslim.

The Rohingya are not officially recognized by the government as citizens and for decades Myanmar's Buddhist majority has been accused of subjecting them to discrimination and violence.

Viewed by the United Nations and the United States as one of the world's most persecuted minorities, thousands of Rohingya from Myanmar and Bangladesh flee their countries every year in a desperate attempt to reach mainly Muslim-majority countries, Malaysia and Indonesia.

In 2012, clashes between the Rohingya and Buddhist nationalists led to scores of deaths, forcing tens of thousands of Rohingya to flee to Bangladesh, Malaysia, Thailand and Indonesia. Some 200,000 people - mostly Rohingya - have been living in camps in Rakhine since the 2012 clashes.

On August 25, violence broke out in Rakhine when around 100 armed Muslim insurgents attacked security guards in the border region with Bangladesh. Myanmar's security forces and Muslim minority Rohingya militants accuse each other of burning down villages and staging mass killings.

Tin Maung Swe, secretary of the Rakhine state government, praised Suu Kyi's Monday speech expressed caution over the possibility of a political solution to the crisis.

"The situation is ready to explode. It just needs a single spark," Swe said.

Also, despite winning the 2015 election, Suu Kyi and her party has limited powers in Myanmar, which is still pretty much under control of the powerful military.

At the same time, the Rohingya conflict is increasingly taking a religious angle with the Arakan Rohingya Salvation Army (ARSA), previously known as Harakah al-Yaqin (Faith Movement), attacking the government security forces. There are reports that many Rohingya refugees in Bangladesh are also willing to join the ARSA ranks.

Militancy in Rakhine obviously gives Myanmar's army a reason to crackdown on "terrorists," and since a political dialogue is nowhere on the horizon, Suu Kyi has in effect very little role to play to resolve the crisis.