Myanmar's de facto leader has called off plans to attend the UN General Assembly. Critics are calling for the Nobel laureate to be stripped of her peace prize amid reports of "ethnic cleansing" against the Rohingya. 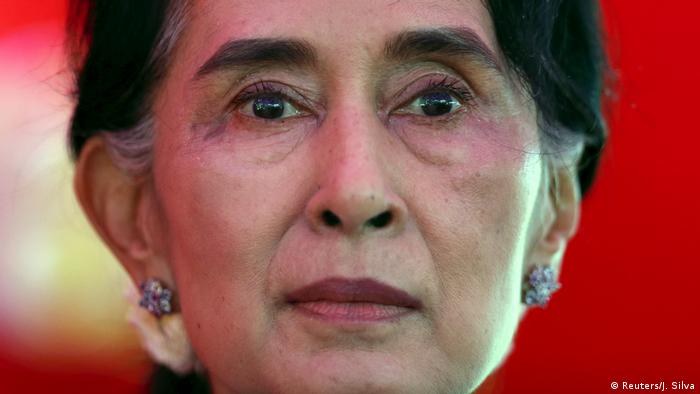 Burmese leader Aung San Suu Kyi will focus attention on the "Rakhine terrorist attacks," her spokesman said, after announcing Wednesday that she will skip an upcoming UN General Assembly session in New York later this month. Suu Kyi will instead speak about the crisis for the first time on September 19, according to a government spokesman.

Suu Kyi, a Nobel Peace Prize laureate, is facing global outcry over Myanmar security forces' fierce response to a series of Rohingya militant attacks in the western state of Rakhine. The military's brutal counteroffensive — which has been described by the UN as "ethnic cleansing" — has left hundreds dead and forced around 370,000 Rohingya Muslims to flee into neighboring Bangladesh in the past three weeks.

"The first reason (Suu Kyi cannot attend) is because of the Rakhine terrorist attacks," spokesman Zaw Htay said. "The state counselor is focusing to calm the situation in Rakhine state."

He continued: "The second reason is, there are people inciting riots in some areas. We are trying to take care of the security issue in many other places. The third is that we are hearing that there will be terrorist attacks and we are trying to address this issue."

In an earlier statement made to Reuters news agency, Htay said he was unsure precisely why Suu Kyi was not attending, but stressed that "she's never afraid of facing criticism or confronting problems," adding that "perhaps she's got more pressing matters here to deal with."

In her first address as national leader to the UN last year, Suu Kyi defended her government's efforts to resolve the crisis over the treatment of Myanmar's Rohingya Muslim minority, who were already widely reported to be one of the most discriminated ethnic groups in the world before the crackdown. Refugees maintain that the crackdown is aimed at pushing Rohingya out of Myanmar.

Attacks by an insurgent Rohingya group on police outposts in late August has set off a wave of violence across Rakhine state. Next to the significant human cost of the conflict, thousands of homes and whole Rohingya villages have been burned down. Myanmar authorities deny that their forces have been setting the fires.

Suu Kyi — who is not the country's president in name but effectively serves as leader — has refused to condemn the military's violent crackdown, which in turn has led to calls that she be stripped of her peace prize.

The UN Security Council is scheduled to discuss the Rohingya crisis on Wednesday for the second time since it broke out on August 25, albeit behind closed doors once again.

Britain's ambassador, Matthew Rycroft, said he hoped the council would agree on a public statement, although such a move seems unlikely. Permanent members Russia and China have publicly backed the Myanmar government. China, which shares a border with Myanmar, has praised the regime for safeguarding "development and stability" in the country.

The UN General Assembly began yesterday and runs until September 25.