The anger and indignation over the Myanmar army's brutal crackdown on Rohingya Muslims is quite understandable. But beware of the propaganda machinery and avoid hasty judgments on the conflict, says Rodion Ebbighausen. 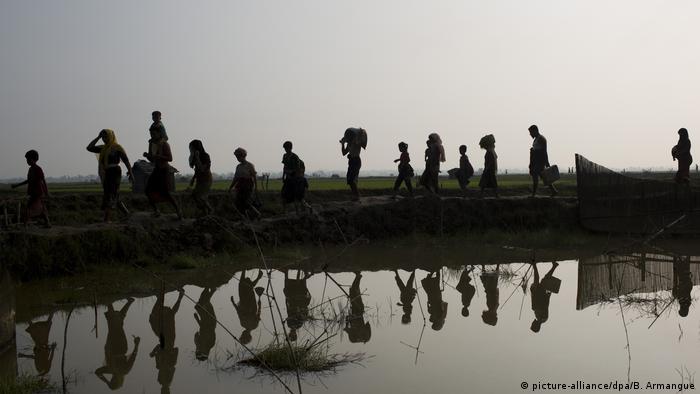 On the surface, the situation in Myanmar's western Rakhine state appears black and white. There is an ethnic minority, widely seen as one of the most persecuted communities in the world, which is being brutally oppressed and killed. The Rohingya are the victims and the majority Buddhists and Myanmar's security forces are the oppressors.

A lack of independent information about the conflict strengthens this sharply outlined narrative and is feeding into a global propaganda. Social media is flooded with horrific Rohingya images that aim to prove the crimes of Myanmar's security forces. But many of these images are part of the fake news machinery.

They have been taken from other conflicts and other violence-marred parts of the world for the sake of propaganda. On the other hand, Myanmar's government headed by de facto leader Aung San Suu Kyi denies any wrongdoing and vows to deal with Islamist terrorists strictly.

Politicians, rights groups and celebrities from all over the world are reacting to the crisis in Rakhine and are calling on the Myanmar government - mostly with noble intentions - to put an end to the violence. But some politicians such as Malaysian Prime Minister Najib Razak, Indonesian President Jokowi, Chechnya's Ramzan Kadyrov and Turkey's Recep Tayyip Erdogan are more concerned about their Muslim brotherhood agenda than the Rohingya misery. Thus, these leaders are promoting an oversimplified, stereotypical thinking about the conflict in Rakhine.

The same is true for activists who for years have propagated the conspiracy theory that the Rohingya are being exterminated under a hypothetical 1970 military plan.

But those who are genuinely interested in a peaceful resolution to the crisis must take into account the complexity of the protracted conflict and avoid hasty judgments.

For instance, the dispute over the term "Rohingya" has been extremely divisive in Myanmar for decades. While the Muslims in Rakhine, their activists, politicians and representatives like to be known as "Rohingya," the Myanmar government insists the term "Muslims in Rakhine state" is more accurate. Some radical opponents of Islam even call them "Bengalis" to indicate that the Rohingya are illegal migrants from the neighboring Bangladesh.

The disagreement over the term "Rohingya," like many other issues in the state, is part of the political discourse because nationality and civil rights have been ethnically defined in the Southeast Asian country since the colonial era. This is already evident in states such as Shan, Kachin, or Chin, which refer to different ethnic groups. In other words, only those who are members of an indigenous ethnic group can be recognized as citizens of the country.

The controversial 1982 citizenship law, which is an extension of the post-independence 1948 legislation, aims to push back foreign influences, especially those of Indians and Chinese, and therefore recognizes citizenship retroactively. 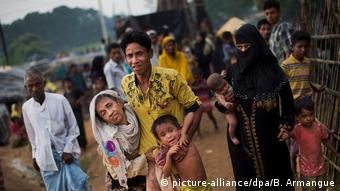 Under these circumstances, it is only logical that the Rohingya have strived to be recognized as an indigenous ethnic group whose ancestors have always lived on the territory that is part of today's Myanmar.

It's therefore no surprise when a Rohingya militant told Asia Times, a Hong Kong-based media outlet, that his movement would lead an "open war" until the civil rights of the Rohingya were restored.

Historians and activists of the Rohingya movement have been trying for years to reshape the region's history, in an attempt to show the Rohingya as a clearly defined group that is based in Rakhine for centuries. But these attempts have been fervently opposed by Buddhists in Rakhine.

Their interpretation of history takes on a different shape. They see their state as a centuries-old Buddhist kingdom in which various Muslim groups played an important role, but always under the benevolent protection of the nation's Buddhist kings.

Read more: The Rohingya people in Myanmar: what you need to know

The fact is, Rakhine has been dominated by Buddhism for years, but it has also always housed diverse Muslim minorities.

The term "Rohingya" is therefore a highly politicized term. If media, activists or politicians use it, they're taking a political stance. At the same time, the term "Muslims in Rakhine state" is by no means neutral.

From the point of view of those who are being described in this manner, this usage derecognizes their claim to an indigenous origin and obstructs any chance of recognition. Since they are also not recognized as citizens in Bangladesh, they will effectively remain stateless.

This dilemma shows that in the current situation, there is no neutral ground on which the conflict can be described and judged impartially. And silence is no alternative either, in view of the humanitarian disaster. But those expressing their views must be aware that they will inevitably become a part of the conflict.

In these circumstances, it is important to keep the widest possible distance to propaganda and disinformation campaigns. It is essential to pass on only the information which has been confirmed by at least two independent sources, and to weigh each word carefully.

Indian PM Narendra Modi is visiting Myanmar at a tricky time when the country and its de facto leader Aung San Suu Kyi are increasingly coming under sharp international criticism due to the plight of Rohingya Muslims. (05.09.2017)

More than 70,000 Rohingyas have fled Myanmar for Bangladesh since a crackdown began in October 2016. In total there are almost half a million such refugees in Bangladesh. They live in crowded camps such as Kutupalong. (14.02.2017)