India′s Narendra Modi visits Myanmar as Rohingya crisis worsens | Asia| An in-depth look at news from across the continent | DW | 05.09.2017

Indian PM Narendra Modi is visiting Myanmar at a tricky time when the country and its de facto leader Aung San Suu Kyi are increasingly coming under sharp international criticism due to the plight of Rohingya Muslims. 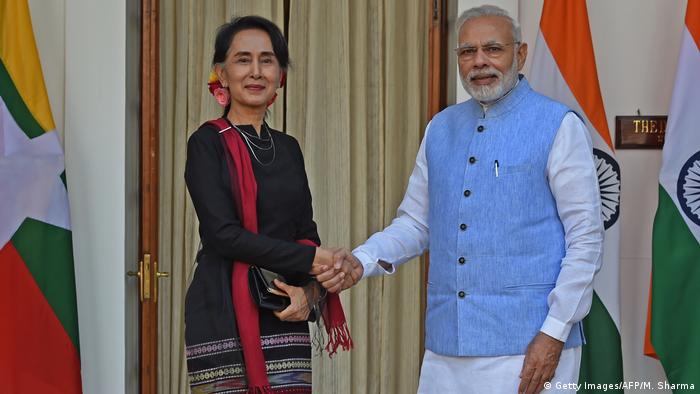 Myanmar is "a valued neighbor and a close friend of India's," said PM Modi in a personalized email that he sent to the Indian community in Myanmar ahead of his first official visit to the Southeast Asian nation.

Modi landed in Myanmar on Tuesday afternoon as part of a five-day foreign tour that already took him to the southeastern Chinese city of Xiamen to attend this year's BRICS summit.

In the capital Naypyitaw, the Indian prime minister is scheduled to hold talks with President Htin Kyaw, State Counsellor Aung San Suu Kyi and other high-ranking officials. He is also holding a community event in Yangon to address the Indian diaspora there.

In addition to Naypyitaw and Yangon, Modi is traveling to the ancient city of Bagan, where he will visit its famous Buddhist shrines, some of which date back to the 11th century. He is expected to announce Indian financial aid for their conservation. The two countries are looking to strengthen their cooperation in a host of areas related to security, trade and energy, among others.

Modi's trip comes at a time when Myanmar is facing stringent global censure due to the ongoing Rohingya crisis. The estimated 1.1-million-strong Rohingya are a stateless ethnic minority who are reviled and accused of being illegal immigrants in Myanmar. Many people in Myanmar even reject the term "Rohingya," fearing that it gives political recognition to a group they regard as "Bengali" foreign nationals.

People outside the country, though, recognize that many Rohingya have lived in Myanmar for centuries and call on the nation's government to grant them citizenship, freedom of movement and basic rights.

Ethnic and religious tensions between Buddhists and Muslims over the past couple of years have turned the situation volatile in the country's western Rakhine state. The latest flare-up of violence in recent days has already displaced tens of thousands and forced them to seek refuge in neighboring Bangladesh.

Myanmar, which denies persecuting the Rohingya, says its security forces are tackling "terrorists" who have launched attacks in Rakhine.

The current state of affairs has provoked outrage in a number of Muslim countries worldwide, prompting them to censure Myanmar's government and its de facto leader Aung San Suu Kyi. But she has limited authority over the actions of the nation's security forces, as Myanmar's 2008 constitution gives the military power over internal security, defense and border affairs. Those ministries are headed by serving military men, and the civilian government lacks enough authority to act in areas related to security policy.

In this context, Modi is expected to discuss with Myanmar officials about the prevailing situation. But it is unlikely that the Indian leader would make any statements that would be perceived in Myanmar as offering support to the Rohingya cause.

Moreover, Modi's government itself is looking to identify and deport about 40,000 Rohingya Muslims living in India, saying that they are a security threat. Rights groups have criticized the decision and called on New Delhi to reconsider it.

"India is a member of the UN Human Rights Council. They (Rohingyas) have been the target of the most serious abuse ever chronicled. How can the government think of deporting them when they are not recognized in their own country? It is against all canons of international law," Meenakshi Ganguly of Human Rights Watch recently told DW.

Others like Ravi Hemadri of the Development and Justice Initiative (DAJI), an NGO, says the government's proposed move is a complete rollback of its age-old refugee policy. India's Supreme Court has agreed to hear a plea challenging the government's move.

The Rohingya is not the sole issue on Modi's agenda, however. As part of his "Act East" policy, Modi is attempting to bolster India's economic and strategic ties with countries in North and Southeast Asia. Political analysts say it's also a move aimed at containing growing Chinese power and influence in the region.

So Modi's visit presents an opportunity to boost trade and investment relations between the two sides. India views Myanmar as its gateway to Southeast Asia and ASEAN nations. The two nations share a long land border of over 1,600 kilometers and a maritime boundary in the Bay of Bengal.

Modi will therefore look to advance initiatives such as a trilateral highway project connecting India's northeast with Myanmar and Thailand. He will also discuss the Kaladan transport project connecting Kolkata's seaport with Sittwe seaport in Myanmar.

Indian analysts believe there is a sense of urgency in New Delhi to push these projects forward against the backdrop of China's rapid progress in implementing its "Belt and Road Initiative (BRI)." BRI is President Xi Jinping's ambitious project that seeks to link China with other parts of Asia and Europe through multibillion dollar investments in ports, roads, railways, power plants and other infrastructure.

Observers say India's economic agenda in Myanmar could be derailed by security challenges, as Sittwe - the capital of violence-prone Rakhine state - is the site of an Indian-built port that is key to New Delhi's connectivity plans in the country.

Myanmar leader Aung San Suu Kyi has denied accusations of ethnic cleansing against the Muslim minority Rohingya communities. Suu Kyi said it was "too strong an expression" for what was happening. (06.04.2017)