Myanmar – A year of democracy

A year ago, Aung San Suu Kyi's party took over the reins of the country as Myanmar's first elected government in half a century. Things haven't turned for the better for everyone since then. Verena Hölzl reports. 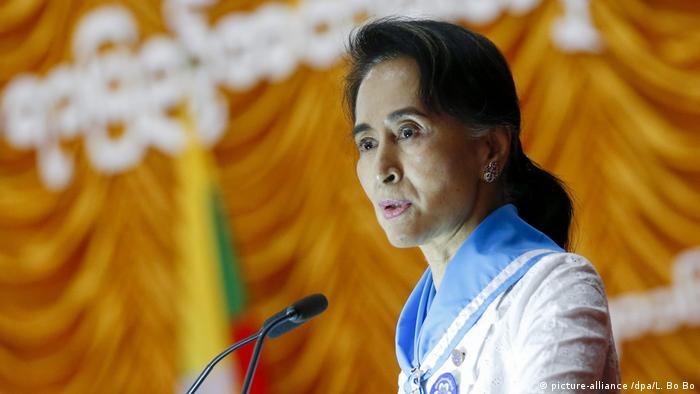 It's been a year since Aung San Suu Kyi's National League for Democracy (NLD) took over power from a military-backed regime in Myanmar, a development welcomed by the people with full of hopes and expectations.

The de-facto leader Aung San Suu Kyi, officially the state counselor, has managed to retain her popularity since taking office. Wherever she appears, all eyes are on her. The democracy icon still enchants all those who approach her.

"The Lady," who sacrificed her family and liberty in the struggle for democracy in her home country, is still regarded as the nation's savior.

But things have changed over the past year, as the NLD government has hardly any achievements to show so far.

"The glass is not half empty, but half full," says Aung Tun Htet. The economist is one of Suu Kyi's advisors. "There is still a lot to be done, but in view of the huge task facing us, we have come a long way," he told DW.

Many do not share this view. They point, for instance, to the unresolved dispute with rebels belonging to the Kachin minority in the northern part of the country. Myanmar's military and the rebels have been engaged in a conflict for decades.

The military, which took the initiative by itself in 2010 to launch democratization, cemented its power in the nation's constitution. As a result, Suu Kyi has had to find common ground with the generals to push through important reforms.

"This is far from easy," says Min Zin, whose think tank analyzes the relationship between the military and the civilian government.

Myanmar's ethnic minorities, which account for 40 percent of the population and fall victims of attacks by the military, are increasingly frustrated. And the peace process that Suu Kyi launched last summer has thus far come to naught.

Another daunting challenge facing the government concerns the Rohingya in western Rakhine state.

Since October, at least 70,000 Muslim Rohingya people have fled the region to neighboring Bangladesh, according to the United Nations. The latest bout of violence was ignited by the killing of nine border police personnel by a militant Rohingya group.

The military then started a security operation against the militants. But soldiers have been accused of committing rape, murder and torture in Rohingya villages, prompting the UN to level accusations of "ethnic cleansing" and "crimes against humanity."

Myanmar: A tale of media, utopias and adventurous women

Last week, the UN Human Rights Council agreed to dispatch a fact-finding mission to ensure "full accountability for perpetrators and justice for victims."

But Myanmar's government has lashed out at the initiative and said it would only "inflame" the conflict.

Army chief Min Aung Hlaing was unambiguous in his criticism, warning the UN not to interfere in national matters.

Most people in Myanmar view the Rohingya as illegal immigrants from Bangladesh and pay little interest to their plight. That's why in Burmese social networks, people are more concerned with government restrictions on the upcoming water festival than with the far-reaching decision of the UN.

While the Nobel Peace Prize laureate is coming under increasing international pressure because of human rights violations in her country, she continues to enjoy great trust among the majority of the Burmese people.

The NLD's promises of democracy, the rule of law and development are so universal that it is difficult to assess their record, say experts. "It's only a year," says Taxi driver Than Aung. "We have to be patient." He is convinced that Suu Kyi is doing her best to fulfill her campaign pledges.

But whether or not others in Myanmar share this view will be evident from the results of the by-elections that are due to take place on April 1.

More than 70,000 Rohingyas have fled Myanmar for Bangladesh since a crackdown began in October 2016. In total there are almost half a million such refugees in Bangladesh. They live in crowded camps such as Kutupalong. (14.02.2017)