Soldiers who have been fighting Islamist insurgents are said to have fired at civilians fleeing the violence. Up to 2,000 Rohingya Muslims from Rakhine state have reportedly been stopped at the border with Bangladesh. 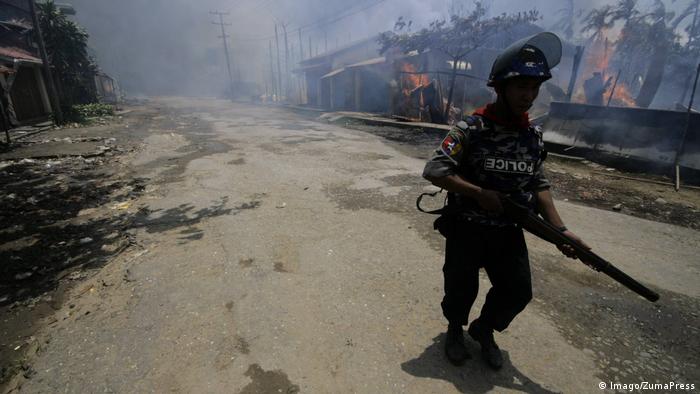 But most who made it to the border with Bangladesh were stranded, as the government in Dhaka effectively closed its border with Myanmar.

Fleeing fresh attacks Saturday, the Rohingya Muslims were halted at the Naf river on the border with Bangladesh, Bangladeshi security officials said.

"Many Rohingya people are trying to enter the country, but we have a zero tolerance policy - no one will be allowed," Mohammad Ali Hossain, a Bangladeshi official, told the Reuters news agency.

The fresh assaults come a day after violence broke out in western Rakhine state when around 100 armed Muslim insurgents attacked security guards in the border region with Bangladesh.

The death toll from those attacks climbed to 89, including 77 militants and 12 security personnel, according to the Southeast Asian country's army.

The Rohingya, an ethnic minority in Myanmar, have long complained of religious and cultural discrimination at the hands of the majority Buddhist people. About 10 percent of the world's stateless people live in Myanmar and Rohingyas make up the single largest stateless community in the world.

The communal conflict has taken a violent turn in the past few years, with reports of a fast-growing radicalization among Rohingya Muslims.

Observers worry the latest attacks could force Myanmar's army to launch an even more aggressive operation against Muslim militias.

According to the United Nations, around 87,000 Rohingyas have fled to Bangladesh following the start of the latest crisis in October. Bangladeshi authorities have taken a hard line with Rohingya refugees, attempting to limit their numbers in their country.

"I would like to commend the members of the police and security forces who have acted with great courage in the face of many challenges," Suu Kyi said.

The United States has urged Myanmar authorities to avoid a response that could escalate communal tensions in Rakhine.

State Department spokesperson Heather Nauert said Saturday that Myanmar's security forces should respect the rule of law while fighting insurgents. She also said the Friday attacks underscored the importance for the government to implement the recommendations of the Rakhine Advisory Commission, which is headed by former UN chief, Kofi Annan.

The Rakhine Advisory Commission, which was established in September 2016, released its 63-page report on Thursday, warning of further radicalization in the area. The report concluded that Rakhine was experiencing a threefold crisis related to development, human rights and security.

In total, the commission put forward 88 recommendations in 16 policy areas, including economic and social development, citizenship, health care and cultural cooperation. Most importantly, the commission said the government must review its citizenship law that "continues to cause significant human suffering and insecurity, while also holding back the economic and social development of the entire state."