At least 120 people have been killed and 200 hurt, 80 seriously, in attacks striking several entertainment venues in Paris. President Francois Hollande has declared a state of emergency and sealed the country's borders. 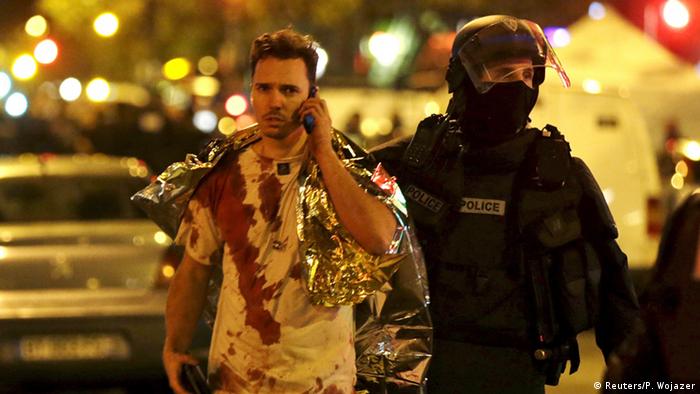 Unidentified militants struck restaurants, a soccer stadium and a rock concert Friday evening in the French capital, killing more than 120 people. Authorities have said that at least five attackers were killed but did not rule out that accomplices could still be at large.

In what appears to have been a coordinated assault, the first reported attack came as at least five people were killed following a double suicide attack struck outside the Stade de France national stadium, where France and Germany's national soccer teams were playing a friendly match.

French President Francois Hollande - who hurriedly left the stadium as reports of attacks began to filter in - convened an emergency cabinet meeting and declared a state of emergency, giving security forces broad powers of arrest and sealing the land borders. Some 1,500 troops were also mobilized.

"In the face of terror, France has to be strong," Hollande said.

No group has claimed responsibility.

By far the deadliest attack was at the Bataclan, a 1,500-seat concert venue where the US rock band Eagles of Death Metal were playing to a sold-out crowd.

One witness told the AFP news agency that one of the militants said the attacks were in retaliation for French military strikes against the self-styled "Islamic State" group in Syria.

"I clearly heard them say, 'It's the fault of Hollande; it's the fault of your president - he should not have intervened in Syria.' They also spoke about Iraq," said Pierre Janaszak, a radio presenter.

The gunmen reportedly took hostages to prevent police from entering the venue. But after commandos stormed the theater at around 1 a.m. local time, the attackers detonated suicide vests, killing an additional five hostages and themselves. 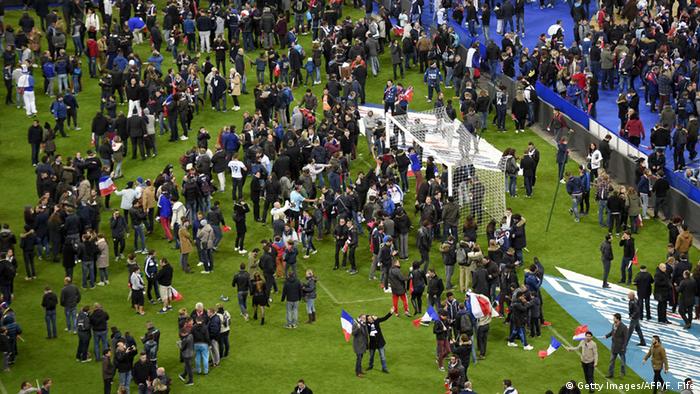 Explosions were audible to fans even over the din of a crowd of spectators at the Stade de France in the northern suburb of Saint-Denis, where the France-Germany friendly soccer match was underway.

The match continued until the whistle, but panic broke out in the crowd as news of the attacks spread, and spectators were held in the stadium and assembled spontaneously on the pitch.

"Players were immediately on their phones to phone home or find out what was happening," said Germany's team manager Oliver Bierhoff.

There was a feeling of "great uncertainty and great fear" in the dressing room, he added.

With the state of emergency in effect, it's unclear whether the team will leave Paris on Saturday as scheduled. The French Football Federation has canceled all events until further notice. 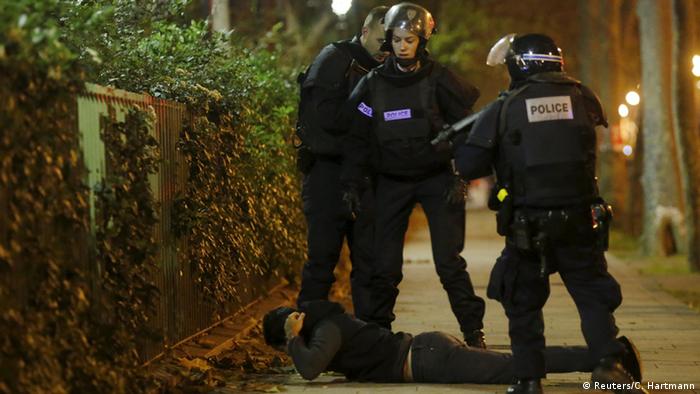 France on a war footing as cabinet invokes 'emergency powers'

Hollande has canceled his weekend plans to travel to Turkey for a G20 summit. Instead, the president has scheduled an emergency meeting of his national security council for 9 a.m. (8:00 UTC) Saturday.

Hollande's cabinet has granted security forces extraordinary powers of arrest that are sweeping, though not unprecedented. The 1955 emergency law was applied during the Algerian war of independence in 1954-1962, again in 1985 during unrest in New Caledonia, a French territory and a decade ago during riots in the Paris suburbs.

It allows police and gendarmes to "prohibit passage of vehicles or people," to set up "protection or security zones, where people's presence is regulated," and to exclude from a given area "any person seeking to obstruct, in any way, the actions of the public authorities."

It also gives the interior minister the power to hold individuals in their homes "whose activity appears dangerous for public security and order."

World leaders were quick to condemn the violence. German Chancellor Angela Merkel and European Commission chief Jean-Claude Juncker both said they were "deeply shocked," while US President Barack Obama said the killings were "an attack on all of humanity."

France has been on edge since the attacks in January against Charlie Hebdo and a Jewish supermarket that left 17 dead. Security had already been increased ahead of UN climate talks to be held near Paris at the end of the month.

More than 100 people have died in at least six terror attacks in Paris, and France has declared a state of emergency. Andy Valvur was at a theater near one of the attacks, and reports from a city on edge. (14.11.2015)