German Foreign Minister Sigmar Gabriel has voiced his support for Serbia's membership in the European Union, but not before it accepts Kosovo's independence. Five EU member states have also yet to recognize Kosovo. 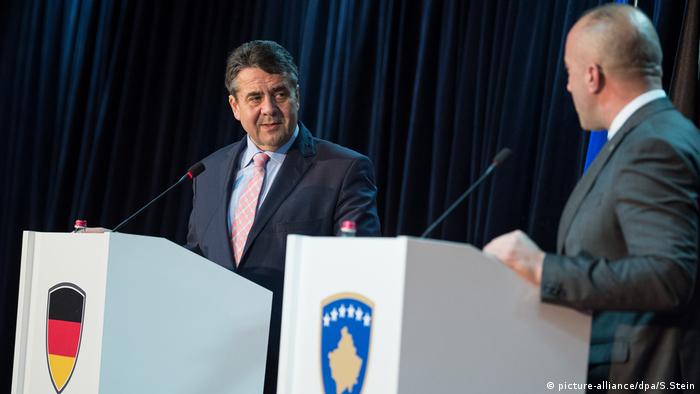 Serbia must accept the independence of its former province Kosovo in order to join the European Union, German Foreign Minister Sigmar Gabriel said on Wednesday during a visit to the Kosovar capital of Pristina.

"If Serbia wants to move toward the EU, the building of the rule of law is a primary condition," Gabriel said during a joint press conference with Kosovo's prime minister, Ramush Haradinaj. "But naturally so is the acceptance of Kosovo's independence. That is a central condition to take the path toward."

Kosovo declared independence from Serbia 10 years ago, a decade after NATO forces halted the killing and expulsion of ethnic Albanians by Serbian forces during the 1998-99 counterinsurgency war. The country will celebrate 10 years of independence on Saturday.

Inside Europe: Can Serbs and Kosovars bury their differences?

Serbia, however, has refused to recognize Kosovo's sovereignty, viewing it instead as a breakaway province. Serbia's defense minister, Aleksandar Vulin, has even suggested that Belgrade and Pristina should partition Kosovo.

Serbia had hoped its stance would not impede its road towards EU membership. However, Germany, which was one of the first countries to recognize Kosovo and remains one of the country's biggest investors, remains insistent. Gabriel said he relayed the same message while meeting officials in Belgrade earlier on Wednesday.

Serbia hopes to join the EU by 2025, a date set by Brussels as it looks to bring Western Balkan states into the bloc. Albania, Bosnia-Herzegovina, Macedonia and Montenegro are all candidates for EU membership.

EU Foreign Ministers are slated to gather in Sofia on Thursday and Friday to discuss the European Commission's Western Balkan strategy.

Gabriel also said that Germany would continue to push to get Kosovo recognized by the five EU member states that have yet to do so — Cyprus, Greece, Romania, Slovakia and Spain.

Read more: Serbia balances between Russia and the West

"Naturally, enabling membership of the EU is the end goal," Germany's top diplomat said. "One of the conditions for that will be to persuade the five EU countries which don't recognize Kosovo that such recognition makes sense because Kosovo will never again be a part of Serbia."

Kosovo has been recognized by 115 countries, although its United Nations membership continues to be blocked by Serbia's allies on the Security Council, Russia and China.

Some 120,000 Serbian nationals continue to live in Kosovo and recognize Belgrade as their capital and continually to be financially supported by the Serbian state.