Serbia balances between Russia and the West | Europe| News and current affairs from around the continent | DW | 19.12.2017

As Serbian President Aleksandar Vucic meets with his Russian counterpart Vladimir Putin, his country is keeping both Russia and the West at bay. But will the country eventually have to choose one path? 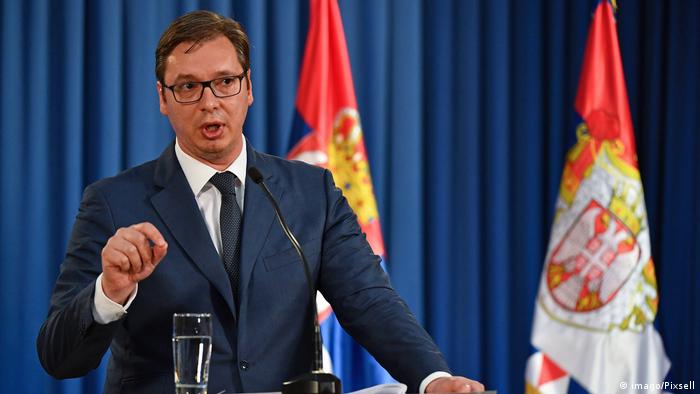 "Good news" is what Aleksandar Vucic has said he expects from his meeting with Russian President Vladimir Putin in Moscow on Tuesday.

The Kremlin's announcement about the meeting keeps the issues on the agenda vague. "The leaders will discuss issues concerning the development of the Russian-Serbian strategic partnership" in its political, economic, cultural and humanitarian facets.

But this visit also shows that Serbia is resisting pressure to choose sides as tensions between Russia and the West heat up. During a visit to Belgrade in October, US diplomat Brian Yee warned Serbia that "you cannot sit on two chairs at the same time, especially if they are so far apart." It was seen as a swipe at the country's policy of pursuing EU membership while continuing to cozy up to Moscow. 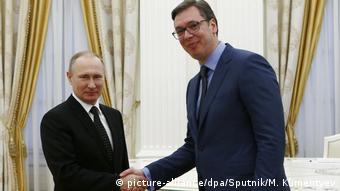 According to Dimitar Bechev, a nonresident senior fellow at the Atlantic Council and the author of the book "Rival Power: Russia in Southeast Europe," Vucic is not the first Serbian leader to look both east and west. "That's been the policy by pretty much every government in Serbia."

After all, there is more at stake for Serbia in relations with Moscow than just keeping up appearances with a fellow Slavic and Orthodox Christian country.

True, the European Union is Serbia's largest trade partner and has invested seven times more in the country than Russia has since 2010. But Serbia is heavily dependent on Russia for its oil and gas. And the country has been discussing involvement in the planned Turkish Stream pipeline project, which is supposed to run from Russia across the Black Sea. The head of Russian oil and gas giant Gazprom, Aleksei Miller, was in Belgrade at the end of November to discuss the project with Aleksandar Vucic.

Military equipment and weapons are also on the table in Russian-Serbian relations. The Serbian government is currently in talks about buying Russian-made S-300 anti-aircraft systems and military helicopters. Serbia recently bought six Russian fighter jets, which were delivered in October. 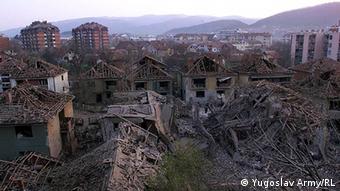 NATO conducted an air campaign against Serbian forces in 1999

So far, even when it comes to the military, Serbia has managed to have it both ways, looking both east and west. Despite the country's interest in military equipment from Russia, in 2017, Serbia took part in 13 military drills with NATO or its members and seven with the US, according to Reuters. It carried out two drills with Russia.

The balancing act seems particularly important when it comes to NATO. After all, as Dimitar Bechev points out, many Serbians haven't forgotten that NATO bombed what was then Yugoslavia in 1999. "Many Serbians feel victimized by what happened in the 90s [...] And Russia is seen as a power that can right these wrongs," and as "an ally on many security issues."  But Bechev is keen to stress that ultimately "Serbian society is much more Western oriented. Russian soft power hasn't gone as far as it has in parts of the former Soviet Union."

When it comes to the Serbia's mixed feelings towards NATO, Elena Guskova, from the Institute for Balkan Studies at the Russian Academy of Science in Moscow, goes further. She argues that cooperating with the Russian military is "a guarantee of safety" for many Serbs, with many feeling "bewildered" by their government's cooperation with NATO. "They bombed them not long ago and now they are offering to work together," is how she sums it up. The government's solution, according to Guskova, is to work with all sides, including Russia.

A crisis center could cause crisis 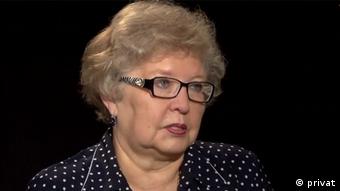 There is one issue that could upset the balance in Serbia's strategy, one mentioned by both Guskova and Bechev. It is the Russian-Serbian Humanitarian Center in Nis. Nis is a city not far from Serbia's borders with Kosovo, which houses NATO peacekeeping troops and a US military base, and with Bulgaria, a NATO and EU member. The center was established in 2012 to help handle natural disasters in the region.

It has become a bone of contention between Russia and the West. Russia has been putting increasing pressure on Serbia to grant diplomatic status to the Russian staff of the center, insisting it is only for humanitarian missions. US officials, on the other hand, believe the center could become a base for the Kremlin to spy on the West from the Balkans. Serbia meanwhile has been dragging its feet over resolving the legal status of the center.

Bechev thinks that the Nis center could ruin Serbia's balancing act, since it could be a reason for Russia to "muddy the waters."

"If Russia is more obstructionist and throws its weight around, there will be pushback from the West. And then it [could] become very difficult for Serbia to maintain its traditional position of balancing East and West." 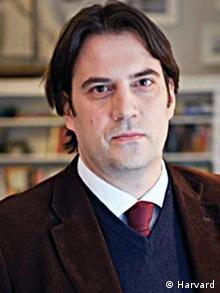 But if Russia continues to give Vucic room to maneuver, then Serbia's strategy of 'sitting on two chairs' could continue to work for the country, Bechev argues. "If it's viable now when things are very polarized it probably will be viable in due time when relations between the West and Russia improve."

Guskova, on the other hand, believes it will be the West, not Russia's actions, that forces Serbia to choose sides. "This year [Serbia] has already gotten a clear signal from Western politicians that it needs to decide."

But Bechev thinks placing itself at the center of a geopolitical tug of war is actually a savvy strategy for Serbia. "As long as Serbia is seen as a battleground between NATO — or the West — and Russia, Western governments will be much more lenient towards Vucic. They won't be asking tough questions," Bechev explains.

He thinks Serbia will try to keep its position between Russia and the West for as long as possible. "They'd rather not make this choice. They want to have their cake and eat it, too."