Should we be worried about our cherry blossoms because of climate change? | Environment | All topics from climate change to conservation | DW | 31.03.2017

With spring rapidly progressing, cherry trees all over the world are beginning to bloom earlier. But the extreme weather of climate change might thwart our favorite cherry blossom festivals.

Birds are chirping, bees are buzzing and fascinated spectators are madly clicking away, taking selfies. The crowds at cherry blossom festivals around the world are a clear indicator for the arrival of spring.

"For anyone who has never seen it, you really couldn't believe what happens in Japan at that time of year," Richard Primack, plant ecologist and professor of biology at Boston University in the United States, told DW. For the enormous cherry blossom festivals in Japan, "whole businesses just shut down and everyone from work goes out and has a big party."

What might seem like a nice pastime and social event is actually a major source of economic revenues. The festivals boost travel rates, as well as demand for hotel stays, food, and other products.

In Washington, "organizers of the National Cherry Blossom Festival estimate 1.5 million visitors, who contribute over $150 million (140 million euros) to the local economy," Mike Litterst, chief of communications for the National Mall, told DW.

But in recent years, fewer tourists have been able to enjoy cherry blossom festivals, because plant blooming periods have become more variable and harder to predict. Climate change is upsetting spring weather, with very early and strong periods of warmth. 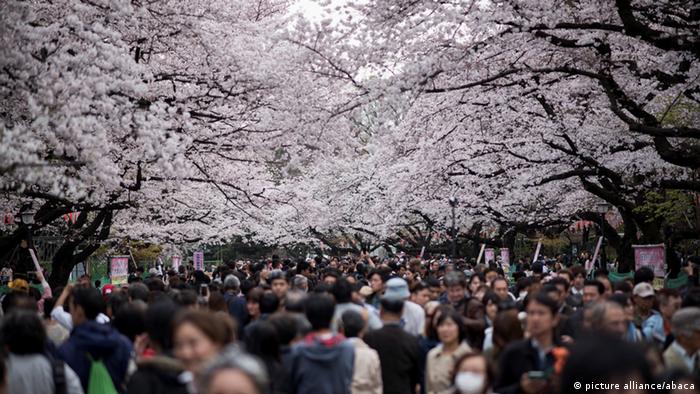 "Plants are now flowering about 10 days earlier than they did in the past" in the New England region, Primack said.

In Germany, the cherry tree bloom is also arriving about 10 to 12 days earlier, Eberhard Walther from the Hesse department of agriculture told DW.

In Japan, blooming may be even more premature.

"In Tokyo, the cherry blossom festival is celebrated two to three weeks earlier than it was 100 years ago," says Primack, which he says shows that earlier flowering phases are becoming a global trend.

"Particularly in some remote towns that have cherry blossom festivals, they have actually had years when the cherries have finished flowering very early and then the tourists didn't show up.

"As a result, the town has lost a lot of revenue," he added.

The biological problem with earlier flowering periods is that blossoms are then more prone to late spring frosts. In Washington, "that resulted in the loss of about 50 percent of the emerging blossoms prior to peak bloom" for the Yoshino cherries this year, according to Litterst.

With the flowering cherry trees of the festivals, this "merely" leads to weaker blossom profusion. But for edible cherries, cold snaps can even result in crop failures by causing cherry blossoms to die off.

And climate change is also posing another threat to our cherry blossoms: larger insect populations. Warmer temperatures cause some species, like the gypsy and winter moths in New England, to hatch in larger numbers more frequently - also attacking cherry trees.

For this year though, our cherry tree festivals mostly seem to have dodged the bullet of climate change's impact.

Warmer spring-like temperatures have kicked off this year's toad migration. But as toads cross roads, many end up dead before they can reach their spawning grounds. A group in Bonn is helping them. (14.03.2017)

The endangered beauty of cherry blossoms around the world

Climate change is causing cherry trees to bloom earlier than they used to. This puts the delicate flowers at risk - and has knock-on effects down the ecosystem. (31.03.2017)