Warmer spring-like temperatures have kicked off this year's toad migration. But as toads cross roads, many end up dead before they can reach their spawning grounds. A group in Bonn is helping them. 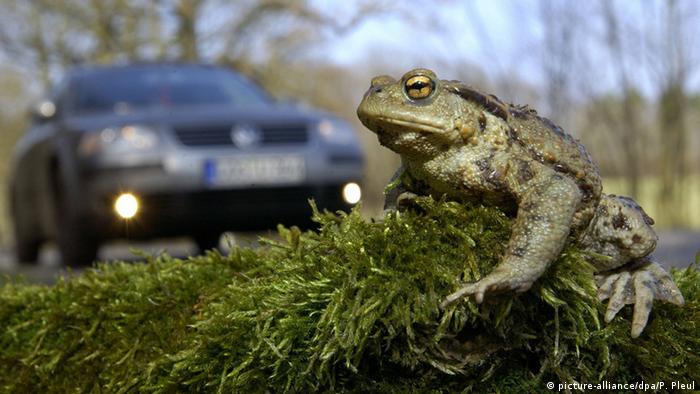 As temperatures are rising, toads start to wander the streets in search of their spawning grounds. With temperatures now rarely dropping below 6 degrees Celsius (43 degrees Fahrenheit) at night, it is the ideal weather for amphibians to migrate.

But many toads and other amphibians never reach their destination.

"Sometimes the whole population is killed by cars," said Monika Hachtel, a biologist and deputy director of the Biologische Station Bonn/Rhein-Erft, an NGO that looks after wildlife conservation.

She's trying to prevent a similar fate for toads here in Bonn. Hachtel and her team have been looking after toads and amphibians for over 16 years now.

There are three main strategies for protecting toads: The most effective, albeit least used, is closing roads off for all traffic. Realistically, this can only be done for smaller roads.

Another option is to build small tunnels under roads that allow the amphibians to cross without harm. That's usually done when new roads are built.

The most common strategy to protect toads is to put up special amphibian fences. There are about 800 of these fences in Germany. Toads can't jump over this protection fence, so will eventually land in one of the buckets the conservationists have put out

Hachtel and her team put up this fence here in Bonn in mid-February which they will remove again once toad migration has come to an end in mid-April.

"The colleagues put the fence into the soil so the toads can't dig under the soil," Hachtel told DW. "That's the first step. And the second step is to put in the buckets."

She points to some buckets which have been put into the ground right in front of the 800-meter long (0.5 miles) fence every three to five meters. Once toads have reached the fence, they will wander along it to find a way through. Eventually, they fall into one of these buckets.

The staff and volunteers of Biostation patrol the fence every day and check the buckets for toads and other amphibians like fire salamanders. About 1,000 toads live in this area, says Hachtel. 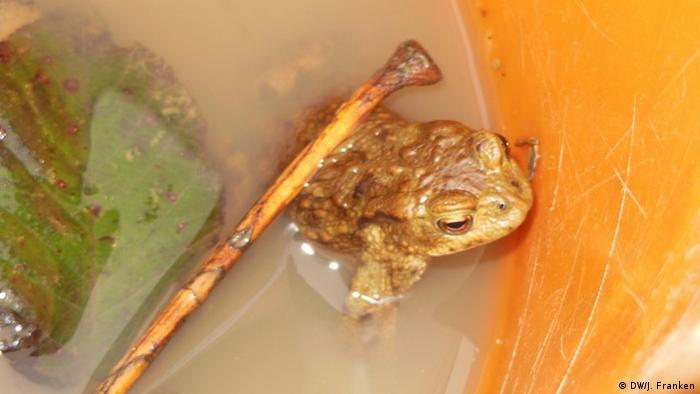 If they find amphibians in the bucket, they take them out of the buckets and carry them across the busy road that goes through the Ennert forest where they will set them free again. From there, the toads will make their way to the little lakes and ponds that are their spawning grounds.

In the Bonn area, the most common species, aside from the common frog and the fire salamander, is the common toad. When these golden-eyed amphibians migrate, the male toads are on the lookout for females. If they find one, they climb on her back and cling to her for the rest of the journey. When other males come too close, or accidentally try to mount them, the males make a high-pitched noise.

Some might say the warty toads are hardly a species that is worth protecting. So why save them?

"They are really important, because on the one hand, they feed on snails and insects, so they reduce some species of vermin, and on the other hand they are good prey for many other animals," said Hachtel. 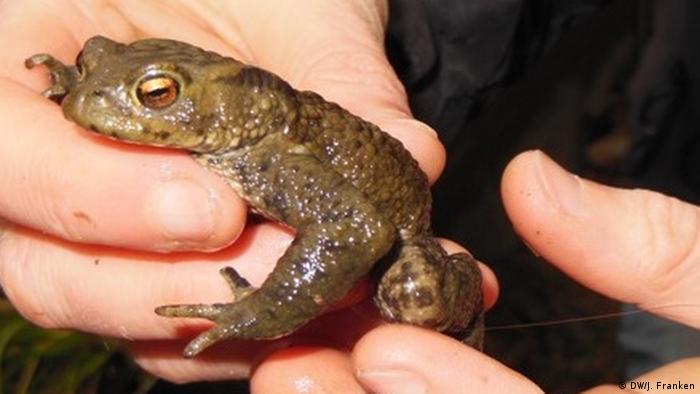 Toads are worth saving - for one, because they keep harmful insect populations in check

Keeping harmful insect populations in check is even more crucial in the tropics since they control mosquitoes, says Dennis Rödder of the Zoological Research Museum Alexander Koenig. A decrease in amphibian populations worldwide would also have a negative effect on humans, he said. The insects that toads prey on can also act as carriers of diseases - Zika is only one of many examples.

From a global perspective, toads are also important for bodies of water. As they feed on algae, they are essential for regulating water quality in many ponds and lakes, especially in spring, when algae usually bloom.

In addition to the dangers of ending up as roadkill, toads are also threatened by two fungi - batrachochytrium dendrobatidis and and batrachochytrium salamandrivorans. These fast-spreading fungi are lethal to amphibians and have caused toads, frogs and salamanders to die off in thousands.

And then there is of course the danger of habitat destruction, says Rödder - primarily due to new roads and other infrastructure. In addition to the danger of killing amphibians on their way to their spawning grounds, roads also dissect their habitats.

"So even if you have well-preserved natural reserves, if there is a loss of connectivity and bodies of water are isolated in the landscape, toads will not be able to have healthy populations," said Rödder.

Scientists have discovered two new frog species in Bolivia and Peru. But they may already be under threat. (06.03.2017)

Ghana is home to over 80 frog species, but environmentalists say the amphibians are disappearing. Now one man is leading the fight to save them. (15.08.2016)

Around 10,000 endangered frogs have been found dead at Peru's Lake Titicaca. It's the only place where the amphibians live. Now, an investigation into the die-off has begun. (18.10.2016)