Scientists have discovered two new frog species in Bolivia and Peru. But they may already be under threat. 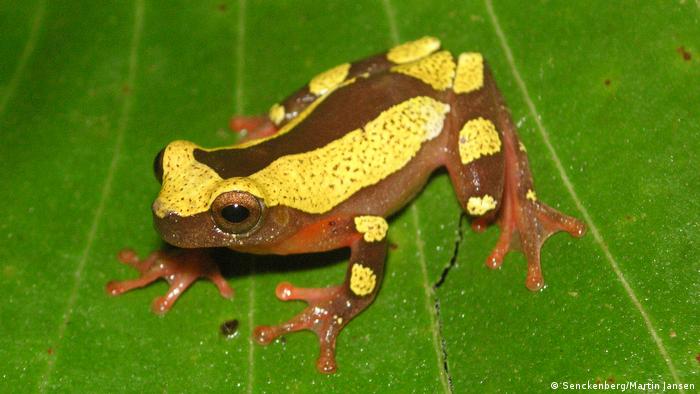 Scientists have discovered two new clown tree frog species deep in the Amazon Rainforest but warn they are likely at risk because of their small range and threats to their habitat.

The small, brightly colored animals had been falsely classified as species that had already been described, but DNA analysis helped prove they were in fact distinct frogs. The species are at home in Peru and Bolivia.

"With our new study, we once again show that we do not fully know the diversity of South America's frogs," Martin Jansen, of the Frankfurt-based Senckenberg Research Institute said on Friday, adding that: "Even the most widespread species are likely to be at risk."

The study published in journal PLOS ONE shows the number of frog species in the Neotropics is likely wildly underestimated. A wide-ranging study of species is lacking largely because of the size of the Amazon basin. Given that more than 810,000 square kilometers of Amazon rainforest has disappeared over the last decade, more research is needed say the authors.

"The Amazon region is threatened by many influences: On the one hand logging, the mining industry and oil production; on the other hand climate change," said lead author Marcel Caminer, Pontifical Catholic University of Ecuador. "It is important to have a complete species inventory in order to take the necessary steps to protect biodiversity."

Clown tree frogs – named for their bright colors – are mainly found in the Amazon basin but also appear to a lesser extent in savannahs. Habitat destruction is the biggest threat to frogs and other amphibians worldwide.

Researchers in India have rediscovered a tree frog thought to be extinct since the 19th century. The frog has a novel way of feeding its young. (21.01.2016)