Last month Egyptian authorities encouraged witnesses in a notorious gang rape case to come forward. When they did, they themselves were reportedly charged with crimes. The move has stifled Egypt's rising #MeToo movement. 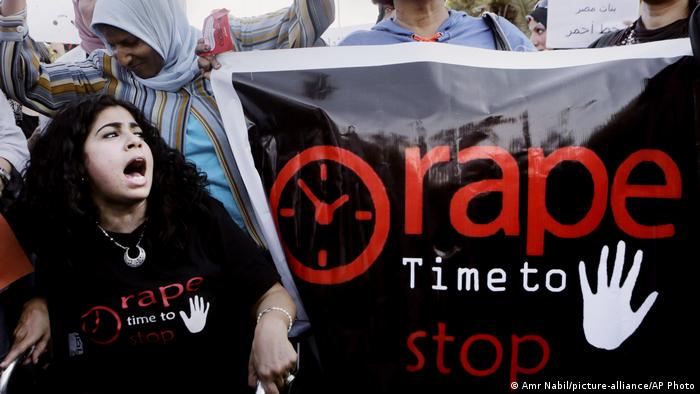 In recent months, Egypt appeared on the verge of a reckoning. In a conservative society where survivors of sexual assault are blamed or shamed into silence, a groundswell of activism in a high-profile rape case had forced authorities to take action, rather than sweep the allegations away. But when witnesses in that case came forward after being promised protection, they were reportedly charged with vague crimes and publically smeared, dealing a blow to Egypt's rising #MeToo movement.

"The frightening message that the government signals here is that no woman, survivor or witness should come forward and complain about sexual violence, otherwise they might face prosecution and jail," Amr Magdi, a researcher at Human Rights Watch (HRW), told DW.

The case centers on a 2014 incident at the luxury Fairmont Nile City Hotel in Cairo, where a then 18-year-old woman said several men drugged her and filmed themselves taking turns raping her and writing their initials on her back.

Activists say the video was quietly circulated among 70-80 of the attackers' friends for years. The incident surfaced this July after the Instagram account @assaultpolice, which had been set up by #MeToo activists to provide an anonymous platform to report assault,  called on women allegedly assaulted by the men in other instances to share their stories.

According to Egypt's public prosecutor, on August 4 the Fairmont rape survivor approached the National Council for Women (NCW), Egypt's government-appointed body for women's advocacy, after the NCW had encouraged witnesses to come forward, promising to protect their identities.

Other witnesses in the case also approached the NCW. But late last month, four of them, one male and three female, were themselves arrested, along with two of their acquaintances, according to independent Egyptian media and other international reports. Security agencies searched their devices and leaked the contents to pro-government media, which then used it to smear the witnesses and the survivor with accusations of drug use and participation in group sex parties, HRW said.

HRW reports those six now face charges of "debauchery" and violating laws on "morality" that are vague, discriminatory and open to abuse.

"This is precisely how victim blaming works," Magdi said. "Now this is taken to completely new level and reinforced by the highest political authority by charging those brave witnesses based on private videos and photos that were taken illegally from their phones and devices."

The NCW and the @assaultpolice account's administrator did not respond to DW requests for comment. A lawyer for one of the witnesses declined to comment. 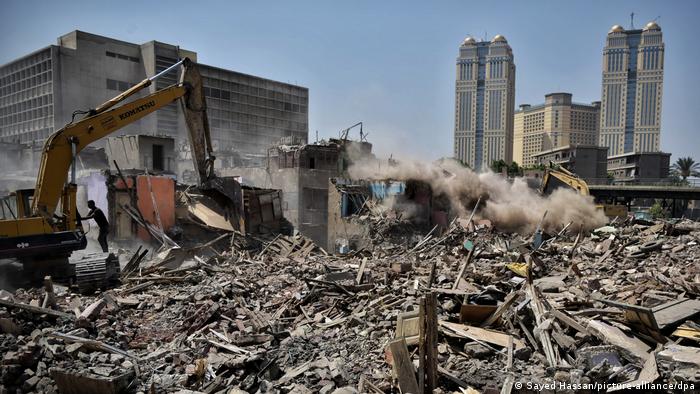 The Fairmont hotel towers behind a slum that is being torn down to make room for social housing. The luxury hotel was the site of a notorious gang rape in 2014.

The Fairmont case has provoked particular outrage in Egyptian society, as the accused men are wealthy and well connected.

In late August, Egypt's public prosecutor said it had issued warrants for nine men accused of the rape. Activists said two of the men are accused of other sexual assaults, The Guardian reported.

"The father of one of the suspects is among the top 10 wealthiest businessmen in the country, and all the others' fathers are big businessmen," Magdi said. "That's exactly the reason why this case has been turned on its head. Prosecuting these men would challenge the status quo in which no one really approaches the wider phenomenon of sexual assault and harassment against women in this society." 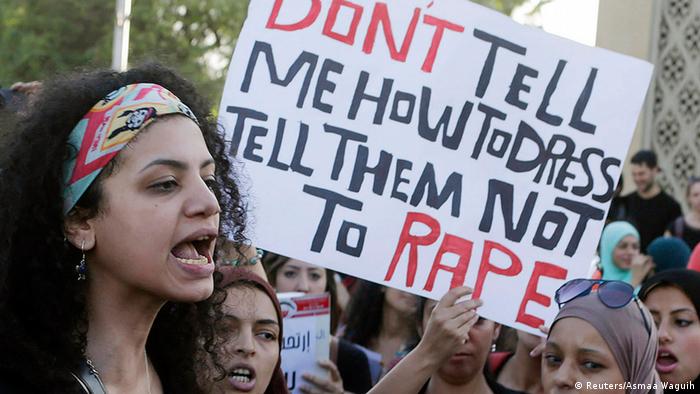 In 2014, women gathered in downtown Cairo to protest sexual assault against women. Many videos of assault are published online, and the victims are often smeared.

Authorities' attempts to detain the men accused of the rape had initially given #MeToo activists hope that their campaign was having an effect. Other positive signs included a law passed in August aimed at protecting survivors' privacy and a campaign by a leading Islamic authority emphasizing that a women's choice of clothes has no relation to assault.

But the revelations of the state's targeting of witnesses has signaled authorities' will to shut down the movement.

Allegations that at least one of the six people charged with "debauchery" had engaged in same-sex conduct has also sent many of Egypt's LGBT+ community into hiding. They fear the witnesses' seized devices may be mined for content that could be used to target them, Magdi said. Homosexuality is not explicitly criminalized in Egypt, but rights groups say "debauchery" laws are used to target LGBT+ people.

Yet online activists aimed at outing assaulters and overturning a culture that blames victims and shames them into silence have pressed on.

During the temporarily online absence of @assaultpolice, other accounts, such as @gangrapistsofcairo, emerged to continue the campaign.

Later, once reactivated, @assaultpolice and others launched a campaign with the hashtag #IAmTheFairmontVictim. Users of the tag post videos declaring they are the survivor of the Fairmont rape in order to obscure the real survivor's identity, in case leaked videos are used to smear her.

The role of the NCW, which backtracked on its promises to protect witnesses, has faced criticism from civil society and rights activists. Launched in 2000, the state-run council's stated aim is to further women's empowerment. However, an analysis by the Tahrir Institute for Middle East Policy found that it prioritized disseminating the state's agenda over women's causes.

Magdi said the NCW should be scrutinized by its international supporters.

Rather than funds from the UN, USAID or the German development agency GIZ being used for propaganda "to polish the government's image," the money would be better used to support independent organizations "that are actually bringing about change in society," Magdi said.

The GIZ did not respond to a DW request for comment.