Sarah Hegazy was arrested, tortured and subjected to sexual assault in prison for waving a rainbow flag at a rock concert in Cairo. She regularly discussed how her time in prison affected her mental health. 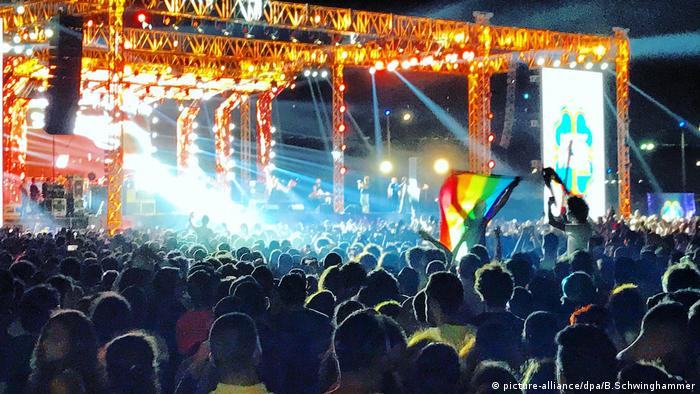 Egyptian LGBT+ activist Sarah Hegazy took her own life on Sunday, writing in a note that she had "tried to find redemption and failed" after suffering from post-traumatic stress disorder for years as a result of her time in prison.

The 30-year-old's death sent shock waves throughout the LGBT+ community and its allies, not only in Egypt and the Middle East but across the globe.

"For those who demand honest existence [in Egypt], the choices are prison, exile or death," wrote Egyptian researcher Timothy Kaldas in a tweet. "Sarah experienced all three because she loved honestly in a place that hated her for it."

Hegazy rose to notoriety in 2017 when she waved a rainbow flag — long considered a symbol of strength for the LGBT+ community — at a concert for Lebanese rock band Mashrou' Leila, whose lead singer Hamed Sinno is gay.

"I was declaring myself in a society which hates all that is different from the norm," said Hegazy in an interview with DW after she was released from three months in prison.

Egyptian authorities arrested her and more than 70 others in the wake of the concert in what is largely considered the biggest crackdown on Egypt's LGBT+ community. She was the only woman — or at least one of very few — arrested after the concert, according to press reports.

"It was a whole troop, a large number of armed officers, and all this just to arrest a single woman," Hegazy said at the time. "We never thought that this would provoke such reactions."

Although Egypt does not explicitly outlaw homosexuality, it frequently uses charges of "public debauchery" in order to prosecute those who do not comply with societal prescriptions of sexual orientation and gender.

Hegazy was open about the trauma she experienced during her time in Egyptian prison, where she was sexually assaulted by inmates and tortured by prison officials for her sexual orientation. She regularly discussed the effect it had on her mental health in social media posts.

Despite international pressure, Egyptian authorities have rejected recommendations to end the use of law enforcement measures to target people on the basis of sexual orientation and gender identity.

"The Egyptian government is refusing to recognize the existence of lesbian, gay, bisexual and transgender people, flouting its responsibility to protect the rights of everyone," said Human Rights Watch's Rasha Younes in March.

Hegazy died in the Canadian city of Toronto, where she lived in self-exile from her native Egypt. "To the world: you were cruel to a great extent, but I forgive," she wrote before her death.

If you are suffering from serious emotional strain or suicidal thoughts, do not hesitate to seek professional help. You can find information on where to find such help, no matter where you live in the world, at this website: befrienders.org.

The appearance of prominent Egyptian actor Hesham Selim and his transgender son on DW's Arabic program "Jaafar Talk" has made waves in a country where sexual identities are rarely discussed. (06.05.2020)