Police have detained seven people for allegedly raising a rainbow flag at a rock gig in Cairo. They have been charged with promoting homosexuality despite it not being an offense under Egyptian law. 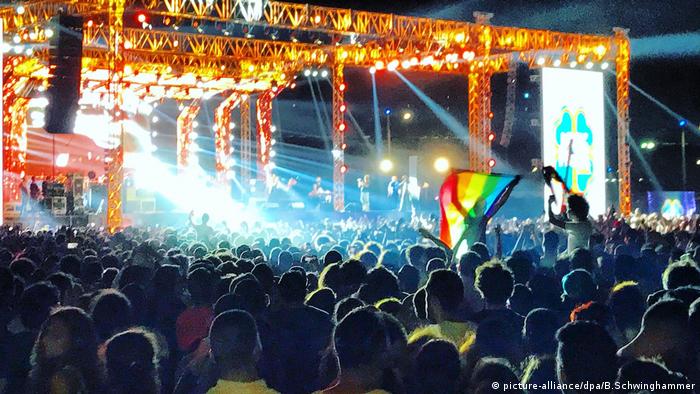 Egyptian authorities arrested seven people on Monday, who they accused of being gay and promoting homosexuality, according to officials who did not want to be named as they had not been authorized to speak to the media.

Read more:In Egypt, Islamic clerics give out edicts in the metro

The officials said the seven people arrested were responsible for raising the rainbow flag at a gig by popular Lebanese rock band Mashrou' Leila. They have apparently also been charged with "public indecency" and "inciting immorality among young people."

Read more: Alaa al-Aswany: What should our attitude to the barbarians be?

Homosexuality is taboo in Egypt but it is not illegal to identify as gay nor is it expressly prohibited to "promote" homosexuality. Authorities, however, often use offenses such as blasphemy or "debauchery" to justify arresting homosexuals in a country that severaly limits free speech.

In April 2016, an Egyptian court sentenced 11 men to jail terms of up to 12 years after convicting them of "debauchery and incitement to debauchery," provoking international criticism.

Egypt's conservative musicians' union said Mashrou' Leila, whose singer Hamed Sinno is openly homosexual, would not be allowed to perform again in Egypt. The group has previously been banned from performing in the Jordanian capital, Amman.

Authorities have confirmed the arrest of prominent human rights attorney Ibrahim Metwally for spreading fake news. Metwally was helping the family of Giulio Regeni, an Italian student who was abducted and killed in 2016. (14.09.2017)

Three Egyptian journalists have seen their jail sentences reduced by a Cairo appeals court. Critics argue the case is part of a larger crackdown on free speech in the country. (25.03.2017)