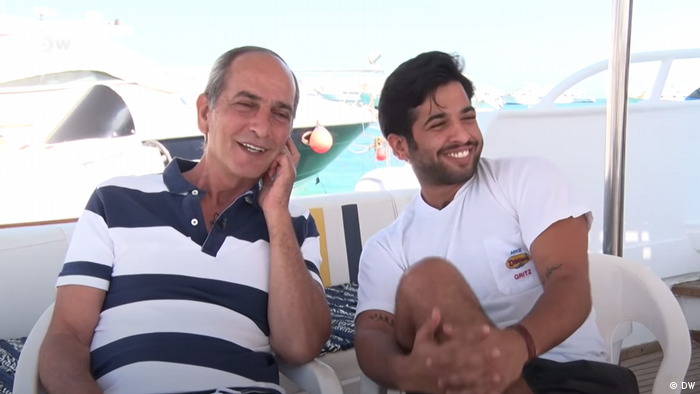 One of Egypt's most recognized actors has garnered a wave of support after he spoke publicly about his transgender son's transition and appeared with him on a DW program this week.

After the actor first spoke publicly about Nour, formerly Noura, on local television last weekend, the two went on international TV to express support for one another and talk about Nour's transition and the challenges he has faced.

"I thought I wasn't a normal person, I thought I couldn't live my life … It was very, very hard," Nour told his father. "But I learned to love myself and stand on my own two feet, so that no one could tell me I am either right or wrong."

As Egyptians stay glued to their favorite TV series during Ramadan, the rare public message of solidarity from a top actor in a largely conservative and patriarchal country generated an emotional response on social media.

Many were surprised by the positive reactions of their families and older generations.

Some thought that this positivity signaled a shift in the conversation about sexual identity in Egypt.

But the show also received resistance from some conservative quarters. One Twitter user told the show's host, Jaafar Abdul Karim, that he only aired disgusting stories.

Unofficial transition leaves him as 'her' by law

Comments like these are not the worst Nour has struggled with in a conservative state where official gender transitions require religious approval.

He told "Jaafar Talk" that before he started his transition five years ago, he and his father decided not to request that approval, having expected to be misunderstood and criticized. Only God could judge him, Nour said.

That may now make things difficult for him in the future because in the eyes of the law, he is still considered female.

According to an Associated Press report, only 87 transitions were officially allowed for "physical reasons" between 2014 and 2017 in Egypt, while none were approved for "gender identity disorder."

But Nour pushed back on the discrimination he faces. "I am Egyptian and I will remain an Egyptian. I don't want to leave this country," he told show host Abdul Karim. "Try to understand me, don't hate me without knowing me at all."

Out LGBTQ scientists: Between success and discrimination 27.06.2022