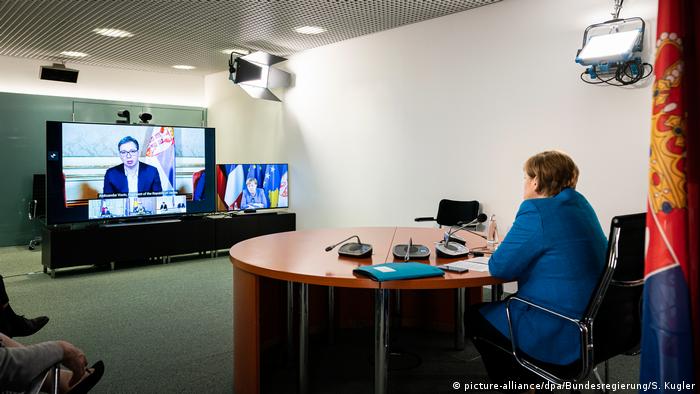 The leaders of Kosovo and Serbia agreed on Friday to relaunch talks on normalizing their relations, following a video summit hosted by German Chancellor Angela Merkel and French President Emmanuel Macron.

The first round of renewed EU-backed talks between Serbian President Aleksandar Vucic and Kosovan Prime Minister Avdullah Hoti will begin on Sunday, the German government said in a statement.

The two are then due to have a physical meeting with Macron, Merkel and potentially other leaders on Thursday in Brussels. 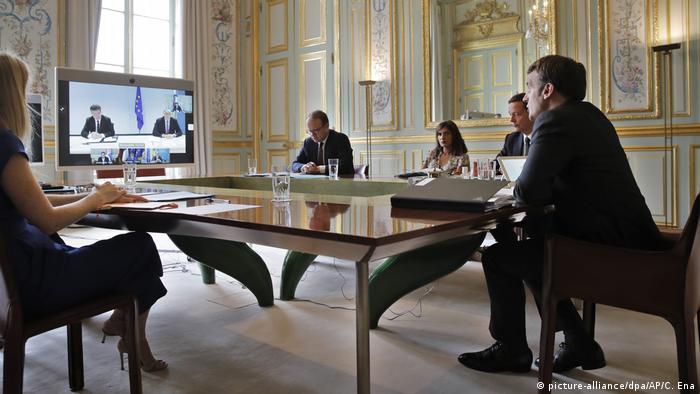 Leaders in Berlin, Paris, Belgrade and Pristina all tuned in remotely amid the pandemic

Talks between the two nations broke down two years ago and international efforts to bring the two sides back to the table have faltered until now.

Kosovo broke away from Serbia in 1999 and declared independence after NATO intervened to curtail ethnic warfare in the region. Serbia does not recognize Kosovo's independence, although it is a precondition for Serbia's future membership in the European Union.

The EU's foreign policy chief Josep Borrell and Miroslav Lajcak, the EU's special representative for the Belgrade-Pristina Dialogue, will head the meeting on Sunday.

Despite agreeing to the talks, remarks from both leaders following Friday's summit revealed that negottitors will face an uphill battle in resolving one of Europe's trickiest territory disputes.

Kosovo's Hoti said in a statement that the talks must lead to Kosovo's recognition. He added that Serbia must stop campaigning against Kosovo as it tries to join international organizations. Kosovo's bid to become a member of the United Nations has been most notably blocked by Serbia's ally Russia.

Hoti also ruled out a proposal floated by Serbia two years ago about swapping a territory of northern Kosovo with a large ethnic Serbian population.

After the talks, Vucic told Serbian state broadcaster RTS that the discussions had been "difficult." In separate remarks, Vucic said that he was hopeful of a deal, but could not say when to expect one.

"No one can guarantee what will happen at the end of the process, but this is the first relatively optimistic news," Vucic said following the summit. Vucic had faced a particularly turbulent week at home, less than a month after his contentious re-election

The development comes during a tumultuous time for both Serbia and Kosovo.

It was the first time that Hoti represented Kosovo in the talks, after President Hashim Thaci pulled out. Thaci is due to face questioning in The Hague on Monday over alleged war crimes during the 1998 – 1999 conflict.

Read more:  Hashim Thaci's past catches up with Kosovo's future

Serbia, meanwhile, was rocked by protests this week over the government's coronavirus response. Vucic initially announced a weekend curfew to curb the spread of the virus, but later scaled it back to a ban on gatherings of more than 10 people.

The door has been opened to allow new discussions between Serbia and Kosovo on Sunday. But even an agreement means that the next problem could be just around the corner, writes Nenad Pejic. (10.07.2020)

A Hague-based special prosecutor has filed an indictment against Kosovo President Hashim Thaci and nine others for murders and other war crimes. Thaci was set to attend a key US summit with Serbian leaders this weekend. (24.06.2020)

Kosovo's prime minister has canceled talks with Serbia in Washington after his president was indicted for crimes against humanity. The talks were meant to be the first dialogue in 19 months. (25.06.2020)

The president was reacting to two days of unrest in the country. Protesters are angry at his regime for several reasons, not least its handling of the coronavirus pandemic. (09.07.2020)