Serbian protesters lash out at Vucic′s botched pandemic response | Europe | News and current affairs from around the continent | DW | 09.07.2020 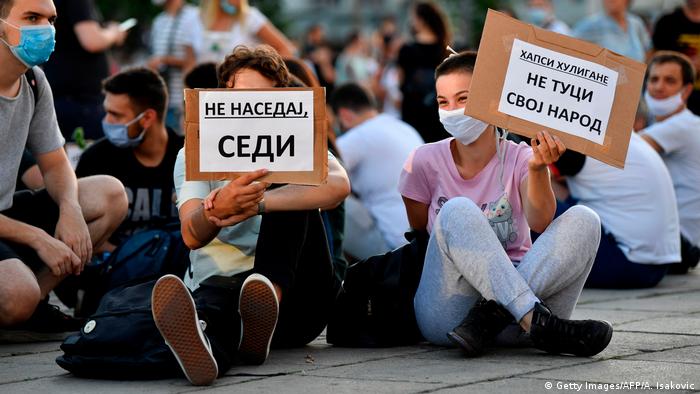 The evening started like so many others – with a lengthy press conference by President Aleksandar Vucic. His address, delivered in the characteristic slow and mournful tone with a lot of bombastic imagery, could be boiled down to the following message: Serbia will reimpose lockdown measures and long curfews to fight the rapidly spreading coronavirus outbreak.

This move was enough to prompt an outpouring of rage on Tuesday. Thousands flocked to downtown Belgrade, including many youths and young couples. The protesters pelted the police with flares, rocks and empty bottles, and a group of them managed to breach the parliament building. The security forces responded with overwhelming force and volleys of tear gas. More unrest followed on Wednesday.

Speaking to DW, marchers rejected the idea that they were protesting against the lockdown. Instead, they say they are angry at Vucic and his government for botching the pandemic response.

"These protests are expressing extreme displeasure that the people, especially young people in this country, have been feeling for a very long time," one participant told DW. "We are protesting against the system where all the values are absolutely twisted, where this government is doing to us whatever it feels like, locking us in at will," she added.

Laughing all the way to the curfew

Government critics view the state's anti-pandemic efforts as a combination of staggering incompetence and politically motivated calculus. After the virus reached Italy in February, the Serbian government staged a press conference where a senior medical advisor dismissed the infection as "the most ridiculous virus in the history of mankind, that exists on Facebook." With President Vucic laughing in the background, pulmonologist Branimir Nestorovic encouraged Serbian women to "go shopping in Italy" because females "practically don't die of the virus."

Ten days later, the first coronavirus case was recorded in Serbia, and two weeks after the original press conference, Vucic flat out denied that Nestorovic ever made his claim.

"Don't lie, nobody ever said it was the most ridiculous virus," the president said as some two dozen people were confirmed to be infected.

No way out for seniors

Just days later, Serbia introduced a state of emergency and imposed some of the world's most draconian anti-pandemic measures, including a 24-hour lockdown on people aged 65 and older in urban areas. A similar blanket ban applied to 70-year-olds and their seniors living outside Serbia's cities. The government followed up by introducing nightly curfews for the entire population, as well as weekend curfews that stretched from Friday evening until Monday morning.

However, Vucic and his government were still set on holding a parliamentary election on June 21. In May, the authorities abruptly ended the lockdown and told the public the outbreak was under control. Daily life resumed with virtually no restrictions. Major sporting events, including a tennis tournament and a top-level football game, were held in front of thousands of fans.

The pro-Vucic camp scored a resounding victory at the polls. Almost immediately after this, Vucic and top medical officials warned of a rapid rise in cases and the strain on the healthcare system. In the week following the election, the reputable Balkan Investigative Regional Network (BIRN) announced a report claiming that the government was drastically underreporting coronavirus cases. Many observers have also accused the ruling coalition of fudging the numbers in order to push ahead with the election.

In recent days, Vucic said the outbreak was boosted by citizens partying and socializing indoors, and urged people not to be "irresponsible". He also said that "nobody was infected" at the election and that the lockdown measures were lifted at the citizens' insistence. With daily death tolls surpassing their peak March and April levels this week, Vucic started bringing back the restrictions on public life.

Time for 'tyranny' to end

For thousands of protesters, Vucic's Tuesday announcement about reimposing the lockdown was the last straw, prompting them to vent their months-long frustration on the streets of Belgrade and other major cities. The roots of the outcry, however, reach much deeper. For many young people, the protests are also an outcry against the country where the ruling party wields unprecedented control of state funds, private companies, security forces, and the media. Clashes between the police and protesters in Belgrade

"I came out to the protest simply because I think it is about time, after eight years, to bring this tyranny to its end," another participant of the Belgrade rally told DW.

The government's heavy-handed response, which saw mounted police and anti-terror squads deployed to contain the unrest, also served to incite the protesters further. Examples of apparent police brutality made rounds on social media, including riot police beating three youths who had been peacefully sitting on a bench, and a plain-clothes police officer putting his foot on the head of a detainee who is lying on the ground. Multiple sources also discussed the rumors of police and pro-government groups being embedded among the protests.

"We are witnessing the use and misuse of force – not just by the police, not just by the hooligans and right-wingers organized by this regime, but also by some apparently parallel state structures... who are of course wearing civilian clothes," the protester added.

Faced with the Wednesday violence, President Vucic blinked. He announced that the curfew idea would "probably" be scrapped, which was confirmed on Thursday by the country's emergency coronavirus council. However, the council also imposed restrictions on gatherings of over ten people in Belgrade and limited working hours for all indoor venues to 9. p. m.

It seems unlikely that the government's compromise should keep the protesters off the streets. With Serbian economy in tatters and bars and clubs closed at night, there are not many other places left for them to go.