After protesters tried to breach the parliament, Serbian strongman Aleksandar Vucic signaled that a curfew would not be reintroduced. He also denounced a young man whose fury at Serbia's pandemic response went viral. 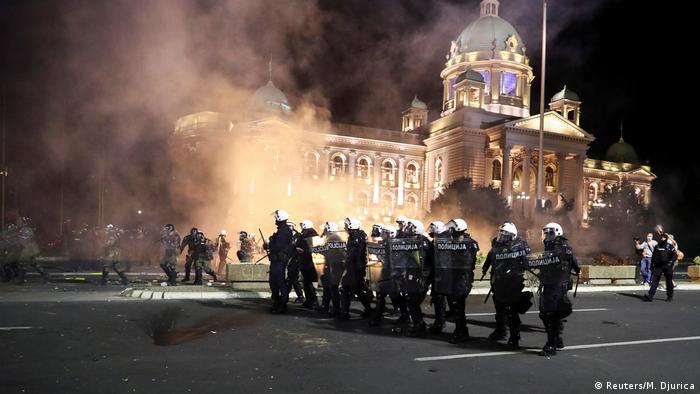 Serbian President Aleksandar Vucic blamed extremists, criminals and unspecified foreign intelligence agencies for the overnight unrest in Belgrade that saw a group of protesters breach the parliament building. The protest was prompted by Vucic's earlier announcement that the country would reintroduce various lockdown measures, including an extensive curfew, as Serbia faces a spike of coronavirus cases.

Protesters blame the government for the infection spread, pointing to the authorities' decision to lift all pandemic restrictions last month. Vucic had insisted on pushing ahead with the June 21 parliamentary election, which saw the pro-Vucic parties score a resounding victory. Major sporting events, including a tennis tournament and a top-level football game, were also held in front of thousands of fans. Many also accuse the government of fudging official data and downplaying the risk in order to hold the election.

'Only a miracle' to avert lockdown

In the days following the election, however, top medical officials and Vucic himself raised the alarm over the galloping infections and the increasing strain on the country's ineffective healthcare system. On Tuesday, Vucic announced gatherings of over five people would be banned starting on Wednesday, and that a curfew would be reintroduced from Friday evening until Monday morning, but did not specify if the decision would apply to the whole country.

At the time, Vucic also said that "only a miracle" could avert the return of the coronavirus measures.

With crowds gathering before the parliament building to protest the move, the rally escalated in hours-long violence which saw at least 43 police officers and 17 protesters injured, according to the officials. Police used large amounts of tear gas and five police vehicles were set on fire. 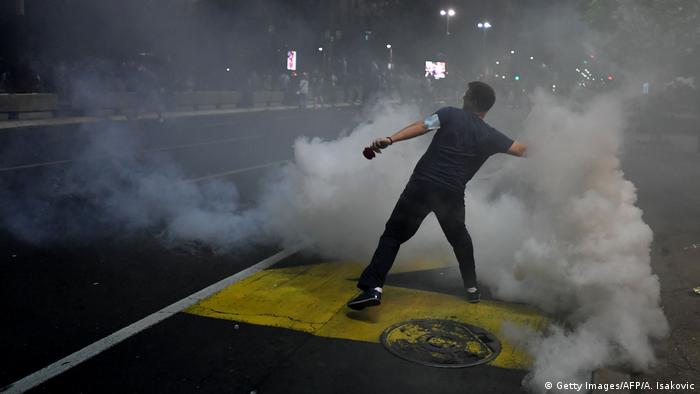 Some protesters threw and kicked gas canisters back towards the police

Addressing reporters on Wednesday, Vucic said he was postponing a diplomatic trip to show that he was not intimidated by the unrest.

However, he also said that the nation's emergency coronavirus council would "probably" avoid a new curfew. He also said that the body, which includes Prime Minster Ana Brnabic and Health Minister Zoran Loncar, would still introduce other anti-infection measures.

Vucic also asked the public not to "make heroes" out of protesters who were recorded criticizing the government during the unrest. He notably lashed out at a young man whose message of mourning for his father, whom the protester believed had died of COVID-19, went viral on social media. The man said his father lost his life because the hospital he was placed in did not have enough ventilators, despite the government "bragging" of Serbia having enough of the breathing machines to give away.

"Pops, this is for you, I know you would be proud," the protester said during live broadcast from downtown Belgrade.

Vucic rejected the claims in his press conference, describing the protester as a convicted felon with a "very bad past."

"I just want to inform you that this is a blatant, blatant lie, such a blatant lie that is just macabre," he said of the claim that the hospital in Zemun, the city just outside Belgrade, did not have enough ventilators.

New protests kicked off in Belgrade and other major Serbian cities for Wednesday evening.