Serbia elections: Who's left besides Vucic?

As Serbians went to the polls, one thing was certain — the election was dominated by populist leader Aleksandar Vucic, who has been setting the rules of the game for years. But many of his rivals refused to play. 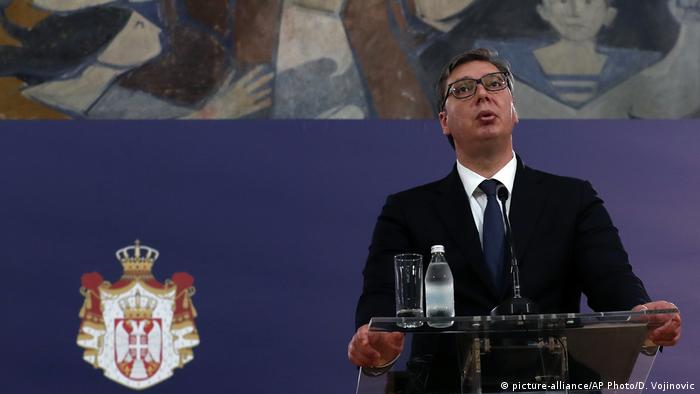 Serbian President Aleksandar Vucic wasn't running for a seat in the Serbian parliament, but that hardly mattered — Sunday's election was still all about him. Just like every election in more than six years has been about him. As Serbia's dominant politician, Vucic seems to be omnipresent and involved in everything, the be-all and end-all of political life in the Balkan country.

The ruling Serbian Progressive Party (SNS) campaigned under the slogan "Aleksandar Vucic — for our children." The president personally spearheaded the party's effort, when he wasn't saturating the news cycle in his official role. His opponents also focused on him when trying to whip up the ever-shrinking liberal public in Serbia into political action. 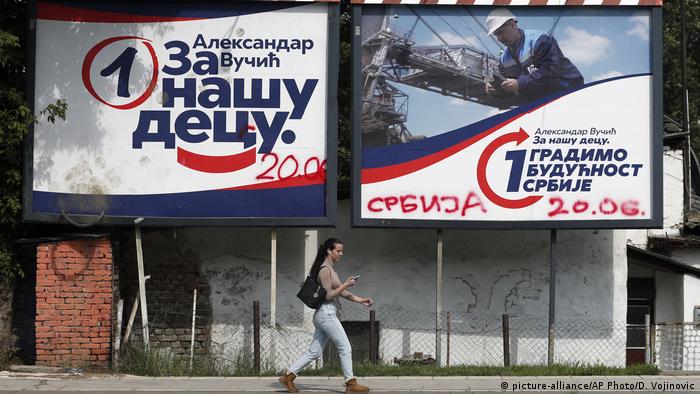 Vucic's SNS party has led with the slogan: 'Aleksander Vucic — for our children'

At the parliamentary polls this Sunday, however, many of his rivals were conspicuously absent — a large group of opposition parties decided to boycott the race. They accused the SNS of rigging the game in favor of the pro-Vucic camp.

One of the opposition leaders to boycott the vote is Borko Stefanovic. The left-leaning politician was brutally beaten in late 2018 in an incident that sparked months of anti-government protests. The suspected attackers have been caught, but have yet to be convicted with the trial restarting earlier this year.

Read more: Why are Serbs protesting against Vucic?

"There is only one man across all media," he said. "There is no room for a differing opinion, especially on televisions with a national frequency."

The ruling party also faces accusations of using an army of internet trolls to amplify its message online. In April, Twitter said it had removed more than 8,500 accounts due to "inauthentic coordinated activity" which aimed to promote "Serbia's ruling party and its leader." Earlier this week, the regional Balkan Investigative Reporting Network published a story detailing an online management system that assigns daily tasks and tracks the performance of pro-government trolls in Serbia.

"All institutions have been usurped [by the ruling party] and people are forced to go out and vote by threatening their jobs, so in all companies — even the private ones — lists are being made of people who have to ensure at least five guaranteed votes and to take a picture of their ballot," said Stefanovic, previously a leader of the now-defunct Serbian Left and an ally of Belgrade's former mayor, Dragan Djilas, before the vote.

Stefanovic and several of his colleagues stayed out of the race, demanding better election terms. Even before stepping out, however, polls showed their party ratings in low single digits, making them unlikely to clear the 3% hurdle required to enter parliament. A recent survey by the Faktor Plus pollster puts the SNS at over 58%.

"The idea of part of the Serbian opposition, to boycott the election, is the way to conceal their own political weakness in front of the Serbian public, that is not to show that they actually, objectively, don't stand a chance in this election," he said.

His comments echo the ones made by Vucic himself earlier this month, as he mocked the boycotting politicians by saying they make the ideal opposition for his party.

"It is as if God sent them to be my opponents, seeing how badly they are at doing politics and how poorly they understand their own people," Vucic said at a campaign rally.

The symbolic weight of the boycott was additionally undermined by other anti-Vucic parties who broke ranks and decided to compete in the parliamentary vote. Popular actor Sergej Trifunovic, the leader of the PSG (Free Citizens Movement), argued that the coronavirus pandemic showed what happens when the ruling party has undisputed power.

"Whatever the election terms might be, and they are certainly horrible, I can tell you right away that they will never get better under Aleksandar Vucic," he said in May. 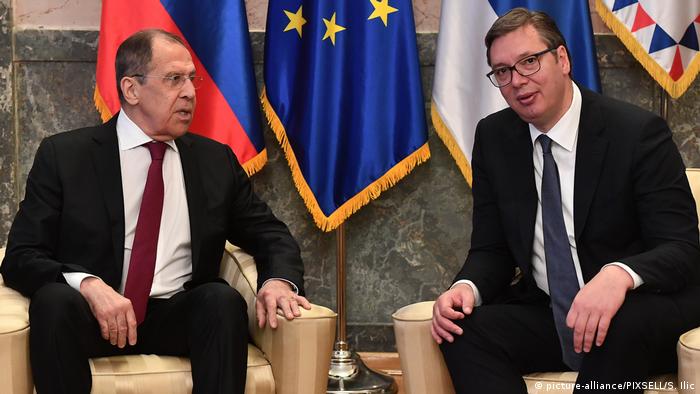 EU, US reluctant to criticize Vucic

Serbia's deteriorating democracy has drawn attention outside the country's borders, with the latest report by the US-funded Freedom House declaring that Serbia has now crossed the line from a democracy to a "transitional/hybrid regime," signaling fragile democratic institutions and "substantial challenges" to citizens' rights and liberties.

The European Union and the United States, however, have been reluctant to comment on the complaints against Vucic. In part, this can be explained by Vucic carefully displaying a friendly face to Belgrade's international allies.

Vucic is also the West's key partner in solving Serbia's most important foreign policy issue: Kosovo, a one-time Serbian province that declared independence in 2008 with the US backing the move. Serbia has so far been able to keep Kosovo outside the United Nations and most major international organizations with the support of Belgrade's traditional ally, Russia.

The US has been pushing for new talks between Belgrade and Pristina, with former Berlin ambassador Richard Grenell saying representatives of the two Balkan governments would meet in the White House next week, after the Serbian election. Washington, at least, seems confident of a Vucic victory.

Serbs head to the polls on Sunday to vote in the presidential and parliamentary elections. President Aleksandar Vucic, who is likely to stay in power, has benefitted from the media limelight amid the war in Ukraine.