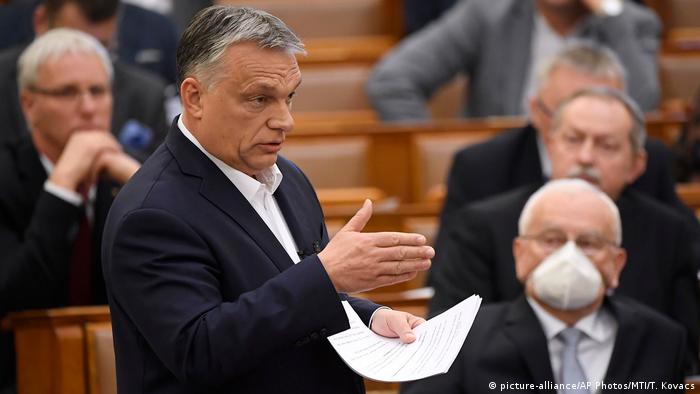 Hungary has experienced "the most precipitous" democratic decline ever tracked by the US-based rights watchdog Freedom House in their "Nations in Transit" report, the think tank said on Wednesday.

"After centralizing power, tilting the electoral playing field, taking over much of the media, and harassing critical civil society organizations since 2010, Orban moved during 2019 to consolidate control over new areas of public life, including education and the arts," Freedom House said in the latest edition of their report.

The country has now crossed the line from a democracy to a "transitional/hybrid regime," the watchdog said. Such regimes have fragile democratic institutions and citizens face "substantial challenges" to their rights and liberties.

Responding to the report, the Budapest government alleged Freedom House was linked with the Hungarian billionaire George Soros, whom the Orban regime regularly describes as a malicious force working against Hungary.

"With their Soros funding they've declined, becoming the fist of the party that is the Soros network," government spokesman Zoltan Kovacs said on Twitter. "Anyone who doesn't conform to their liberal view, gets downgraded."

The US-based watchdog receives an overwhelming amount of its funding through US government grants with several other Western countries contributing on a smaller scale, according to the latest financial statements posted on the body's website.

The report also downgraded Serbia, controlled by former ultra-nationalist Aleksandar Vucic, and Montenegro under long-ruling strongman Milo Djukanovic. Both of these countries aspire to join the European Union.

Freedom House reported that "years of increasing state capture, abuse of power, and strongman tactics employed by Aleksandar Vucic in Serbia and Milo Djukanovic in Montenegro have tipped those countries over the edge" into hybrid regimes.

The group also decried a "frontal assault" Poland's judiciary, saying that the ruling PiS party had violated the country's constitution, rigged the appointment process for judges, set up a partisan disciplinary system for them, and then started punishing individual judges opposing such moves.

"Leaks from August 2019 exposed the involvement of the [Polish] Ministry of Justice in a coordinated online harassment campaign, leaving no doubt about the ruling party's willingness to persecute any and all critical judges," they said.

Read more: Report on democracy setbacks singles out US, India

In their recommendations, the group called for EU funding to be attached to respecting values such as rule of law and free press.

"Given the EU's lack of success to date in addressing autocratization in Hungary and Poland, member states should adopt a simple and uniformly applicable method for making EU funding conditional on respect for democratic values," Freedom House said.

The group also called on policymakers to "work to limit China's corrosive influence" in the former Socialist countries.

Independent media and activists should "urge their governments to resist the temptation of adopting the sorts of censorship and surveillance methods pioneered by the Chinese Communist party."

A report by US-based democracy watchdog Freedom House says many Africans are unknowingly under surveillance by their own states via social media platforms. Zimbabwe and Sudan are among the countries to be singled out. (05.11.2019)