Balkan leaders are in Berlin to "exchange opinions" with Germany's Angela Merkel and France's Emmanuel Macron. The mini-summit is to focus on the bid to revive the talks between Belgrade and Pristina. 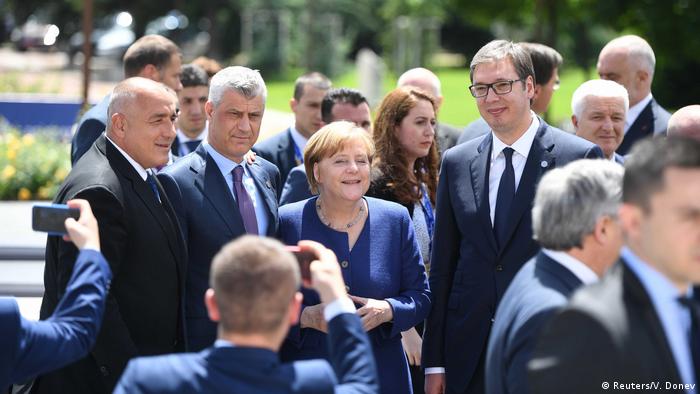 Ahead of the Berlin summit, attended by German Chancellor Angela Merkel, French President Emmanuel Macron, and leaders of several countries in southeast Europe, DW learned of a new way for Germany to relaunch stalled talks between Kosovo and Serbia. Sources close to the Berlin government said that a solution for Belgrade and Pristina could be modeled on a 1972 agreement between West and East Germany.

West German Chancellor Willy Brandt spearheaded the agreement as part of his government's ostpolitik — or detente policy — towards the GDR and the Eastern bloc. The deal allowed the two German states to somewhat normalize their relations without formally recognizing each other.

Serbia still sees Kosovo as one of its provinces, although an armed rebellion and NATO bombings forced Belgrade to pull out its forces two decades ago. Kosovo, which is populated mostly by Albanians, formally declared independence in 2008.

The EU has been brokering normalization talks, but the talks have stalled over Kosovo's reluctance to grant autonomy to a Serb-populated region and Kosovo's unexpected introduction of steep tariffs on Serbian imports last November.

Could Brandt's ostpolitik policy really be applied to Serbia and Kosovo? Diplomatic sources told DW it is unlikely that Serbian President Aleksandar Vucic would sign any document prohibiting Serbia from blocking Kosovo from joining international institutions. In practical terms, Belgrade would consider such a pledge tantamount to recognition of Kosovo's independence.

Vucic himself has been trying to dial down expectations ahead of the Berlin summit. Appearing on Serbian channel Pink TV on Sunday, Vucic said that nothing of consequence would happen in Berlin and that the summit would serve only to "cool off" the opposing sides.

Signals from Pristina were also less than encouraging. Kosovo President Hashim Thaci said that not much should be expected from the talks, and Prime Minister Ramush Haradinaj asked for wartime reparations from Serbia just before leaving for Berlin — neither exactly betting the farm on de-escalation.

Burying the idea of land swap

Even so, the Monday summit could still serve a very important purpose — it could finally bury the controversial idea of trading territory between Serbia and Kosovo.

Both sides floated this solution, which would see a Serb-populated region of Kosovo returned to Belgrade's authority and Kosovo annexing several Albanian-dominated towns in Serbia. However, many international officials fear that redrawing borders would eventually prompt fresh bloodshed in the Balkans.

Germany's Merkel has clearly opposed the swap from the start. Still, there are also notable voices supporting this solution, and the Berlin summit may serve to suppress them. This message is intended not just for Belgrade and Pristina, but for other powerful players as well.

German lawmaker Christian Schmidt, who serves on the Bundestag's foreign policy committee, recently returned from the Balkans where he was laying the groundwork for the Berlin talks. Talking to DW, Schmidt said that Berlin would not accept changing borders under any conditions.

"The idea of ethnically pure states in southeast Europe is as impossible as squaring a circle," he told DW.

Also, the Berlin government now believes the time is right for the EU, led by France and Germany, to take the matters into its own hands.

"Finding a solution (for the Kosovo conflict) requires the active cooperation of the EU, France and Germany," Schmidt said.

It sends a clear message to Brussels, but also to Washington and Moscow — Germany and France are the ones deciding Europe's future and the EU's expansion process.

Regarding the EU and Berlin, sources told DW that Chancellor Merkel is "extremely angry" at the EU's top diplomat Federica Mogherini over Mogherini's support for land swap.

According to Radio Free Europe, this is the reason that Mogherini had not been officially invited to the Berlin summit. She still attended the talks, but only because her boss, European Commission President Jean-Claude Juncker, was unavailable.

German officials specifically stated that the topic of the meeting was to "exchange opinions" with Balkan leaders and not to discuss EU expansion. However, Merkel was also scheduled to meet the prime ministers of North Macedonia and Albania before the main talks.

Specifically, she was expected to take on the unhappy duty of explaining to North Macedonia's Zoran Zaev that there would be no opening of EU accession talks this June. According to a source in Brussels, the talks with Macedonia could not possibly start before an EU summit in December — the reason being France's fierce opposition to any hint of further EU expansion.