Pristina hit Serbian goods with steep tariffs after blaming Belgrade's "aggressive stance" for its failed bid to join the Interpol. Kosovo declared independence from Serbia in 2008, but the countries remain at odds. 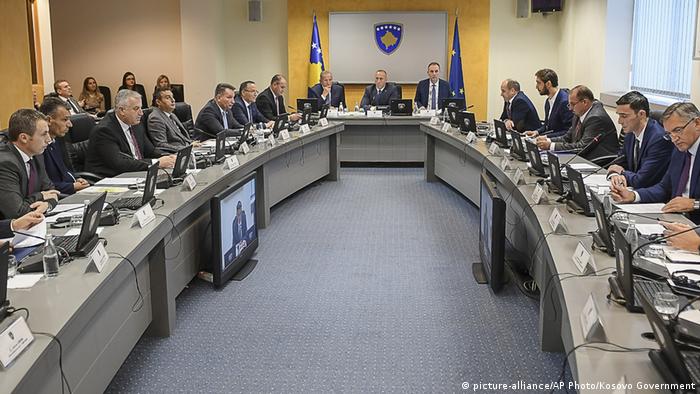 Kosovo raised tariffs on Serbian goods from 10 to 100 percent on Wednesday in retaliation for what it said was Serbia's efforts to block its accession to Interpol.

The small Balkan country, whose bid to join the international police organization failed on Tuesday, also raised tariffs by the same amount on Bosnia and issued an outright ban on any goods that failed to address Kosovo as "The Republic of Kosovo." Serbia and Bosnia do not recognize the formal title for Kosovo chosen chosen by the government in Pristina.

In response, Serbian strongman Aleksandar Vucic convened a meeting of his National Security Council and harshly criticized the Kosovo government.

Raising the tariffs would have "disastrous and destructive consequences" to relations across the entire region, he told reporters in Belgrade. President Vucic also expressed hope that a European power would "have the strength and the will to calm down" the Pristina authorities and pressure them into canceling the measure.

Read more: From Yugoslav wars to an ever tense peace

Serbian Prime Minister Ana Brnabic also said the raising of tariffs was "senseless and unreasonable," but said she hoped there would be no countermeasures from Belgrade.

Kosovo's decision came two weeks after it introduced a 10 percent tariff on goods from both countries. The flow of good from Serbia, Kosovo's biggest regional trading partner, has since fallen by half, according to figures from Kosovo Customs.

According to Vucic, Belgrade is set to consult with UN Security Council members and EU member states tomorrow and inform them about Pristina's "violations of the Stabilization and Association Agreement (with the EU) and the CEFTA accord."

Kosovo has struggled to achieve international recognition since its mostly ethnic Albanian population unilaterally declared independence from Serbia in 2008.

Serbia, which along with Bosnia does not recognize Kosovo's independence, has repeatedly blocked its attempts to join the United Nations.

The EU has tried to reconcile differences between Serbia and Kosovo to pave the way for both countries to join the bloc. Talks have however made little progress since they began in 2013.

The bombing of Serbia by NATO forces in 1999 brought an end to the attacks of Serbian troops against the Albanians in Kosovo. However, the war lacked a UN mandate and remains a controversial subject. (24.03.2014)