Serbia's President Aleksandar Vucic said there was a "long road full of thorns" ahead for Serbia and Kosovo. A border dispute between the two has put hopes of EU membership on hold. 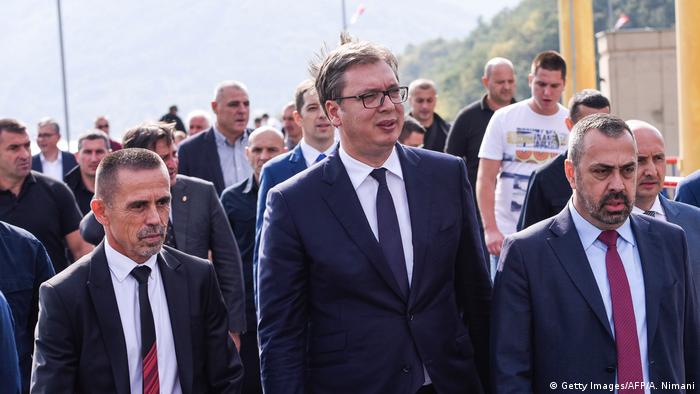 Serbian President Aleksandar Vucic on Saturday warned it would be difficult for Serbia and Kosovo to mend ties while there is European opposition to changing borders in the Balkans.

Vucic said that Serbia wants to be on friendly terms with Kosovo — a requirement for EU membership — but does not recognize its 2008 declaration of independence.

The Serbian president is in Kosovo for a two-day visit that comes amid speculation that the two regions were moving toward normalized relations and might exchange territory.

He had been due to meet with his Kosovo counterpart Hashim Thaci but their meeting was abruptly canceled on Friday.

"I will do my best [to reach the agreement], but it is a long road full of thorns and problems ahead," Vucic told reporters during a visit to the Gazivoda Lake dam, an area of controversy between Belgrade and Pristina.

The land swap idea has drawn opposition over concerns that it would result in demands for similar deals in the volatile region.

While some European Union and US officials have said they are open to the proposal, Germany and many analysts have rejected it on the grounds that it would stir up old hostilities in the Balkans that erupted during ethnic wars in the 1990s.

Kosovo was a Serbian province but a crackdown on ethnic-Albanian separatists in 1998-99 led to the deaths of more than 10,000 people. The conflict ended with an intervention from NATO that forced Serbia to pull out of the province.

Vucic said it "will be very hard for us to reach any kind of agreement" about changing borders.

"I see no possibility to implement my ideas, you saw what Angela Merkel said, you saw what Kosovo Albanians have said," he added.

During a visit to Macedonia on Saturday, Merkel repeated her stance that borders in the Balkans should not change. The deal also faces resistance from Kosovo's ruling coalition and opposition.

Belgrade and Pristina both want control over the artificial Gazivoda Lake, most of which is located in the northern Kosovo region mainly populated by Serbs, and a hydroelectric power plant next to it.

Part of the disputed lake, which is essential for supplying water to some Kosovo municipalities including in Pristina, is located in Serbia, where the source of its water lies.

Tensions in the Serb-majority northern part of Kosovo are rising ahead of a deadline to set up an association of Serb municipalities in the region. Serbia's president has told compatriots "peace is in our best interest." (04.08.2018)