Police forces fired tear gas at crowds in Belgrade and other cities as protesters pelted the police with stones and flares. The unrest escalated as many are outraged by the government's coronavirus response. 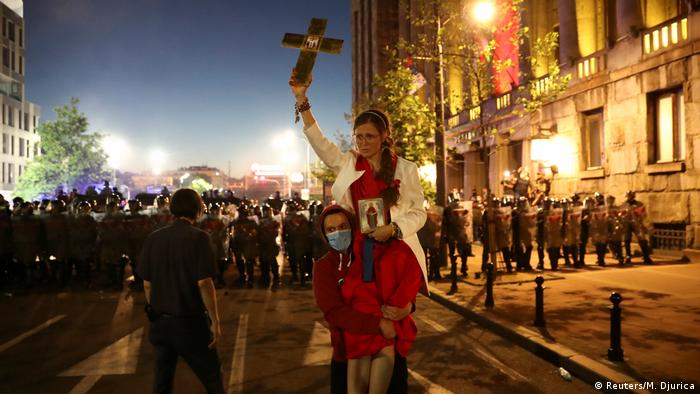 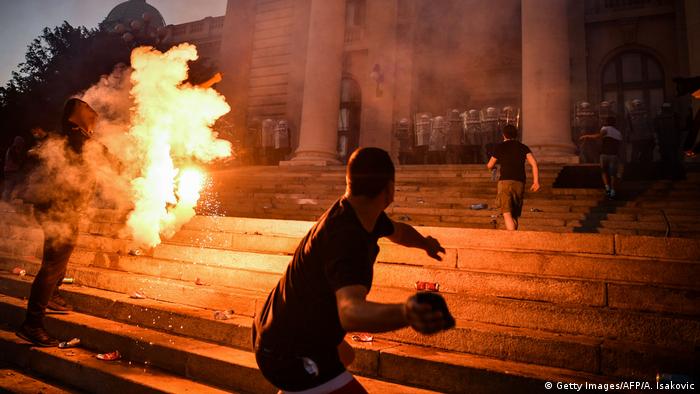 The unrest started in front the Serbian parliament building in Belgrade

Protesters also pelted the security forces with rocks, flares and empty bottles in Belgrade. Some of them threw gas canisters back at the police. As the crowd grew in size, riot police pushed the protesters away from the parliament building where the Wednesday rally started. Large groups of riots police, including vehicles belonging to special anti-terror squads, patrolled the city. Some protesters carried crosses and other religious symbols and urged both the police and other protesters to refrain from violence, according to images from the scene broadcast by the regional N1 broadcaster.

A video posted by the regional investigative network BIRN showed Belgrade demonstrators lighting flares before being pushed away by the police.

The latest unrest follows a rally prompted by the government's attempt to reimpose quarantine measures as the country faces a rise in coronavirus cases. Protesters briefly managed to breach the parliament building in the hours-long unrest that stretched into the early morning hours on Wednesday.

Protesters blame the government for the infection spread. The authorities, led by strongman President Aleksandar Vucic, imposed draconian lockdown measures in the earlier stages of the outbreak but then lifted all coronavirus restrictions as the country was nearing a parliamentary election. Vucic had insisted on pushing ahead with the June 21 vote, which saw his camp score a resounding victory. Major sporting events, including a tennis tournament and a top-level football game, were also held in front of thousands of fans. Many also accuse the government of fudging official data and downplaying the risk in order to hold the election. 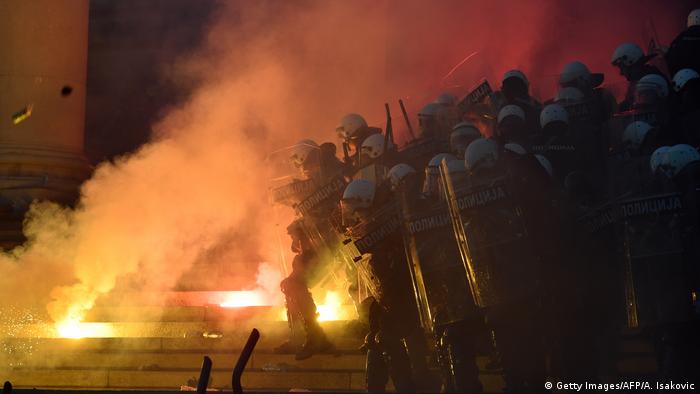 Strong police forces, including anti-terror units, were deployed on the streets of Belgrade

In the days following the election, Vucic raised the alarm over the galloping infections and blamed the citizens' lack of discipline for the spread. On Tuesday, the president announced that the country would reimpose lockdown measures and days-long curfews, triggering the protests.

While the movement has no clear leadership, some of the requests put forward by the protesters include replacing the members of the emergency coronavirus council. The body includes Prime Minister Ana Brnabic and Health Minister Zoran Loncar.

Opposition leaders, including far-right politician Bosko Obradovic and popular actor and politician Sergej Trifunovic, were injured after attempting to join the Wednesday protests. Some of the participants interviewed by N1 said they believed pro-government provocateurs were embedded in the crowd.

At a press conference late on Wednesday, Serbian Interior Minister Nebojsa Stefanovic described the situation "as complete, naked violence" and said the police officers at the parliament suffered "an attempted lynching."

He said that about ten police officers were injured, including one whose legs were broken when he was pushed down a staircase.

"Terrible things were happening," Stefanovic said, adding that the police have reimposed control over all the sites of violent demonstrations. The minister claimed that most of the violence was between different factions amid the protesters themselves.

He also said that the authorities would detain "anyone who fares to endanger any person, their life, security and property."

Stefanovic, whose father recently died of the coronavirus, said he attended his father's funeral earlier today and this was "probably the hardest day" in the lives of him and his family.

"But today is also the day when I want to say that Serbia will never lose to this people," he told reporters.

Earlier on Wednesday, Vucic said that the curfew would "probably" not be reinstated. He also said he was postponing a diplomatic trip to France for tomorrow morning to show that he was not afraid of the unrest.