A Hague-based special prosecutor has filed an indictment against Kosovo President Hashim Thaci and nine others for murders and other war crimes. Thaci was set to attend a key US summit with Serbian leaders this weekend. 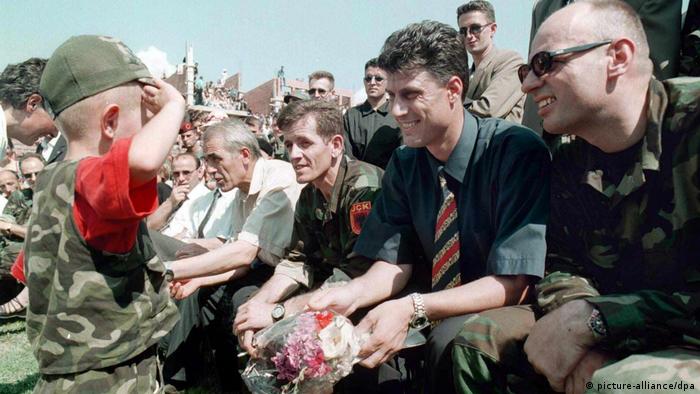 Kosovo president Hashim Thaci and nine other former militants were indicted for war crimes by the Office of the Special Prosecutor in the Hague on Wednesday.

They are "responsible for nearly 100 murders," according to the prosecutors at the EU-backed Kosovo Specialist Chamber. The victims included Kosovar Albanians, Serb and Roma people, with political opponents also targeted, according to the officials.

The officials described the indictment as "the result of a lengthy investigation" adding that the effort reflected the SPO's "determination that it can prove all of the charges beyond a reasonable doubt."

The court officials noted also that the indictment was "only an accusation." A pre-trial judge is currently reviewing it "to decide on whether to confirm the charges."

The 52-year-old Thaci, like many other present-day Kosovo politicians, played a prominent role in the resistance movement that pitted ethnic Albanians against Serbs in what was then a Serbian province.

Less than a year ago, Kosovo's Prime Minister Ramush Haradinaj resigned after he was summoned by the same court on suspicion of war crimes.

DW's correspondent from the Serb-dominated northern Kosovo, Milica Andric Rakic, described the announcement as "probably the single most shocking event since Kosovo unilaterally declared independence" in 2008.

While the legal move itself was expected, it is the prosecutor's timing — just ahead of Thaci's visit to Washington — that carries the impact, she added.

"Thaci will use any last power lever at his disposal to stop the Court, like he tried to do in December 2015 with the attempt at abolishing the Law on the Specialist Chamber," she said. She warned that the move might also spark protests by former militants that could escalate into "ethnic violence."

Thaci pulls out of US meeting

Thaci canceled his trip to the top-level meeting with Serbian representatives in Washington DC after the announcement.

US representative and former Berlin envoy Richard Grenell said respected he Thaci's decision to stay away "until the legal issues of those allegations are settled."

The meeting will still go ahead with Serbian strongman Aleksandar Vucic and Kosovo's Prime Minister Avdullah Hoti. Unlike Thaci, who is one of the most powerful and most experienced Kosovo politicians, Hoti only took power last month.

The ethnically-charged conflict culminated with NATO intervening to support the separatist movement and launching a 78-day bombing campaign against Serbian targets in Kosovo and across Serbia.

In the following years, Kosovo war crimes were prosecuted before the now-defunct International Criminal Tribunal for the Former Yugoslavia (ICTY) in The Hague. The court has now been replaced by the Kosovo Specialist Chamber, an EU-backed body set up in 2015 and also based in The Hague. The Chamber is ruled by Kosovo law, but funded by the EU and staffed by international judges and prosecutors.

The prosecutors said the charges were laid in April before being publicly unveiled on Wednesday. The announcement comes just days before top Serbian and Kosovo officials are meeting in Washington on Saturday for a long-awaited round of dialogue. Thaci was also set to attend the Washington summit.

Many Balkan and international observers view the Washington summit as the key step in the ultimate resolution of the conflict. Serbia still does not recognize Kosovo independence.

Professor Florian Bieber, a political analyst at Graz University's Center for Southeast European Studies, described the dialogue as "in shambles."

While Thaci faces a war crimes indictment, Serbia's Vucic is "ruling without opposition."

"Whoever thinks that a durable solution can be found with these partners is seriously delusional," he wrote on Twitter.

Thaci's 'secret campaign' against the court

Despite operating for years and summoning hundreds of witnesses, this is the first indictment ever issued by the Chamber's prosecutor. The office also accused Thaci and another suspect, former parliamentary speaker Kadri Veseli, of trying to "obstruct and undermine" the tribunal's work.

"Thaci and Veseli are believed to have carried out a secret campaign to overturn the law creating the Court and otherwise obstruct the work of the Court in an attempt to ensure that they do not face justice,'' the statement said.

Avdullah Hoti has emerged as Kovoso's new center-right prime minister, promising a "final deal" with Serbia. His predecessor Albin Kurti was toppled in March and failed to force fresh elections. (03.06.2020)

The EU has failed in the Balkans and now the United States is reengaging with the region. But that's not good news for the countries of the former Yugoslavia, says Norbert Mappes-Niediek. (01.02.2020)

Leftist-nationalists edge ahead after Kosovo vote

The ruling alliance in Kosovo has lost the election. With almost all of the results in, leftist-nationalist Vetevendosje (Self-Determination) just ahead of the Democratic League of Kosovo (LDK). (07.10.2019)

The 38-year-old charismatic leader received backing from the parliament in a vote boycotted by a Serb party. Ex-President Hashim Thaci vacated the post in November after being charged with war crimes.

The man who oversaw Kosovo's quest for independence has appeared in court for the first time on war crime charges. Thaci, who quit as president abruptly last week, pleaded not guilty.