Ramush Haradinaj, Kosovo's prime minister and a former guerilla commander, gave up his post after being summoned as a war crimes suspect before a special court. He has already been acquitted twice before in The Hague. An EU-backed war crimes court called on Kosovo Prime Minister Ramush Haradinaj to show up for questioning in the Hague, causing Haradinaj to unexpectedly resign on Friday.

Before going into politics, Haradinaj was one of the top commanders of the Kosovo Liberation Army (KLA), a guerrilla formation that fought Serbian forces during the 1998/1999 conflict.

"I received a call by the special court as a suspect and was given the option to go as the prime minister, or as an ordinary citizen of Kosovo," the 51-year-old politician told reporters in Pristina on Friday.

"I chose the latter," he added. The interview is set for next week.

Third trip to The Hague

Previously, Haradinaj was charged with war crimes at the now-defunct International Criminal Tribunal for the Former Yugoslavia (ICTY) in The Hague. He was already forced to step down as prime minister in 2005 after a summon from the ICTY.

The UN court acquitted him in 2008, but that ruling was later declared invalid due to reports of witness intimidation. The court eventually upheld the verdict in 2012.

Even so, he was detained in Slovenia in 2015 and France in 2017 over a separate arrest warrant filed by Serbia for alleged war crimes.

Haradinaj is now to appear before the Kosovo Specialist Chamber, an EU-backed body set up in 2015 and also based in The Hague. The Chamber is ruled by Kosovo law, but funded by the EU and staffed by international judges and prosecutors. 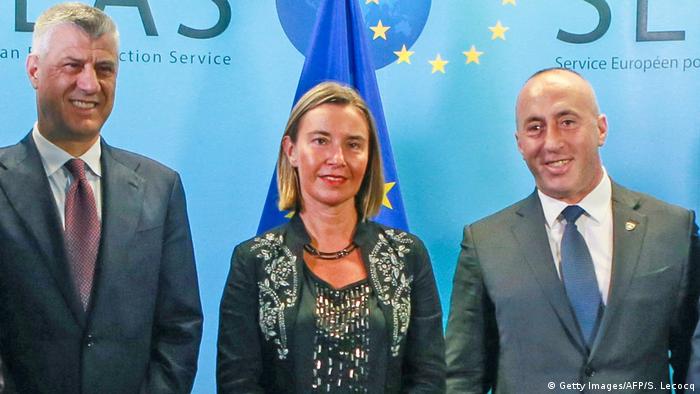 Both Haradinaj and the current president, Hashim Thaci (left), were high-ranking KLA commanders during the Kosovo war

At the Friday press conference, Haradinaj emphasized he was a suspect, but not facing charges.

He also said that he would run at the election which is now likely to be called by Kosovo President Hashim Thaci.

"Responsibility now goes to the president to start consultations to set the date of the election," Haradinaj said. "I will offer myself to the people again to get their trust."

The former militant leader has repeatedly denied any wrongdoing during the war. Earlier this year, however, he was criticized for appointing Sylejman Selimi, a convicted war criminal and another KLA commander, as his political advisor.

Following the news of Haradinaj's resignation, President Thaci said he respected the prime minister's decision and pledged to "act based on my constitutional and legal competences," adding that Kosovo citizens will be informed on time about his next move.

Opinion: A political bombshell in Kosovo

Kosovo Prime Minister Ramush Haradinaj has surprisingly resigned after being requested to face a special war crimes tribunal in The Hague. This will have far-reaching political consequences, says Vilma Filaj-Ballvora. (20.07.2019)

Osmani: If Kosovo delivers, the European Union should also deliver 17.09.2021

In an interview with DW, the president of Kosovo, Vjosa Osmani, confirms her commitment to EU integration and NATO. She also emphasizes the country's full support of the Kosovo Specialist Chambers war crimes court.