Hashim Thaci: ′Serbia is distributing arms in northern Kosovo′ | Europe | News and current affairs from around the continent | DW | 29.01.2017

The president of Kosovo has accused Serbia of provoking fresh tensions in the region. In an interview with DW, Hashim Thaci warns that Belgrade is following Russia’s example in Ukraine. 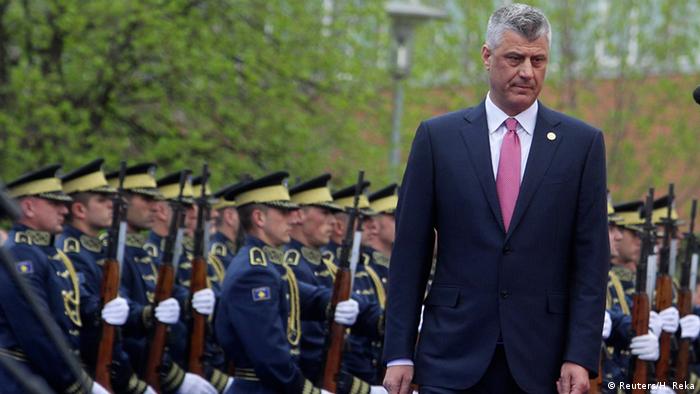 The fragile relationship between Serbia and Kosovo has been increasingly strained after a number of incidents in recent weeks. The former Serbian province of Kosovo declared its independence in 2008, but unlike 110 other countries, including 23 of the EU's 28 member states, Serbia still refuses to recognize it. Official Serbian policy says that Kosovo is still part of Serbia.

There is a relatively large Serbian minority in Kosovo, most of whom live in the north of the country, around the city of Mitrovica. Mitrovica is a city of two halves - one Serb, one Albanian. A few weeks ago the Serbs there erected a wall right through the middle of the city.

A direct train service between Mitrovica and Belgrade was due to resume on January 14, the first since NATO bombed the Serbian capital in 1999. However, the train that departed Belgrade for Mitrovica was emblazoned with the slogan "Kosovo is Serbian" in 20 languages. It was stopped shortly before the Kosovar border.

On January 5, Ramush Haradinaj, an influential ethnic Albanian politician from Kosovo and a former commander in the paramilitary Kosovo Liberation Army (UCK), which fought in the war against Serbia, was arrested in France. He was released again a few days later. The French police were acting in response to an international arrest warrant issued by Serbia. Belgrade accuses Haradinaj of committing war crimes against Serbs during the war in Kosovo in 1999. 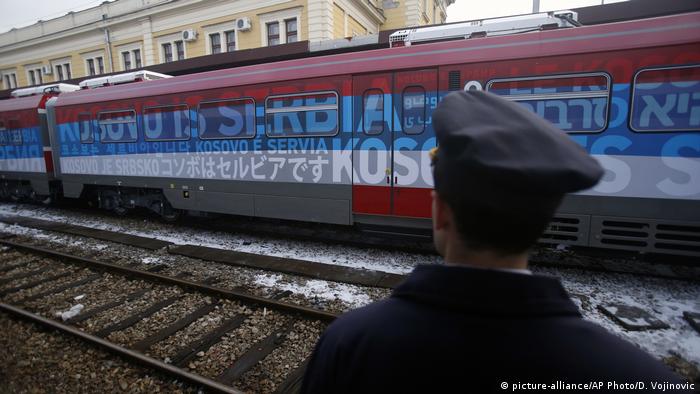 A train decorated with the text "Kosovo is Serbian" written in twenty languages, departing from Belgrade to Mitrovica, Kosovo.

DW:Mr President, what has aggravated the current situation in Kosovo?

Hashim Thaci: The wall, the train and the arrest of Ramush Haradinaj - all of these incidents were directly provoked by Belgrade. The wall is a Kosovar issue, and Kosovo must remove it. A wall like this cannot exist in Mitrovica. We will not discuss this with Belgrade.

As far as the train is concerned, the motivation here was clearly provocative. The train was modeled on a similar Russian one, but our determination kept it away. If the train had come any closer, I'm not sure that it wouldn't have led to armed conflict. We had information that there were weapons and paramilitaries on the train, intended to destabilize Kosovo. We know that Serbia has a plan to divide Kosovo, and that Belgrade is arming Serbs in the north of Kosovo.

Do you have concrete evidence to back up these claims about supplies of arms?

Absolutely. Serbia is in the process of applying Russia's Ukrainian model. The state is sending both civilians and uniformed individuals into northern Kosovo. Serbia is distributing arms to Serbs in northern Kosovo, supposedly to prepare them for attacks by Albanians.

I invite the Serbs not to become the victims of Belgrade's nationalistic politics. My call is aimed at them. It is a call for peace and dialogue. Instead of the calls for ethnic and territorial division of the country, I am calling for integration into NATO and the EU! 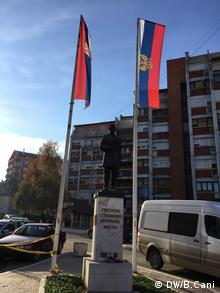 A divided city: Serbian flags in the north of Mitrovica, Kosovo.

In recent days there have been reports that a Russian spy has been arrested in Kosovo. How great is Russia's influence in northern Kosovo?

Serbia is adopting the style and methods Russia used in Ukraine. There are Russians there who cooperate closely with Belgrade. They are in the process of preparing paramilitary units. They don't have uniforms yet, but they're armed with modern handguns. That is being controlled directly by the authorities in Belgrade.

I have already conveyed my concern to the EU. The silence coming out of Brussels is alarming. Similar things happened in the 1990s in Bosnia, Croatia and Kosovo. We saw what the consequences were. That's why the EU must remember Belgrade's previous patterns of behavior, which are no different from those of today.

Does this information come only from the Kosovar police, or from the international troops in Kosovo as well? Do you have proof?

The information has been checked and confirmed. It has also been passed on to the EU agencies in Kosovo.

There are voices in Serbia, and in Kosovo as well, that are in favor of a division of Kosovo. Is such a thing possible?

We are opposed to division. Division would open the door to dangerous concepts that would affect the whole of the western Balkans. Kosovo is committed to maintaining the country's territorial sovereignty and integrity.

Right now the EU is showing no leadership and no vision with regard to the western Balkans. Brussels is reacting too late, and there are anti-European elements who are exploiting the momentum. Germany has played an exceptionally positive role - in both concrete and visionary terms.

But the hesitation by the EU has revived the nationalistic tones coming out of Belgrade. As an independent country, we have to respond to this. The EU must start treating Kosovo as a sovereign and independent state.

The United States has a new president who keeps repeating "America first." Are you worried that America will pull its troops out of Kosovo? You spoke recently with representatives of the new administration in Washington…

It has been confirmed to us that the United States will continue to direct its attention towards the Balkans and towards Kosovo. The commitment shown in previous years has certainly not been called into question.

Hashim Thaci is a Kosovar politician who has been president of the Republic of Kosovo since April 2016. From 2008 to 2014 he was the first prime minister of the country, following the declaration of independence. In the 1990s, Thaci was a co-founder and leader of the Kosovo Liberation Army (UCK) paramilitary organization, which fought against Serbian troops in the Kosovo War of 1999.