Schalke is in talks over terminating its partnership with longtime kit sponsor Gazprom. This comes after the Bundesliga 2 outfit removed Gazprom from its jerseys as a result of Russia’s invasion of Ukraine. 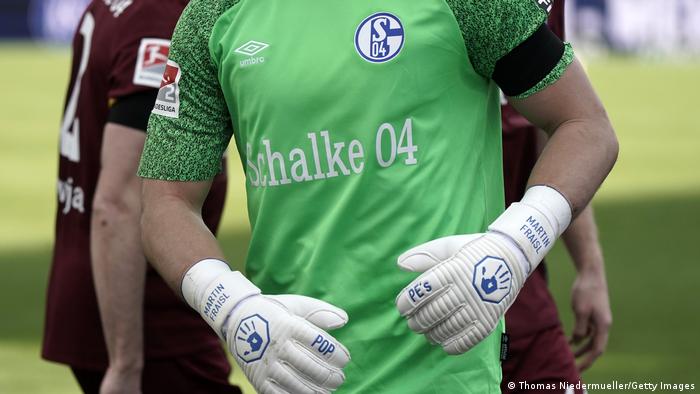 Schalke announced on Monday that it plans to formally cut ties with longtime kit sponsor Gazprom in response to Russia's invasion of Ukraine.

The club said in the statement that its executive and supervisory boards are in talks with the Russian state-backed oil giant to terminate the partnership.

The sponsorship agreement was set to run until 2025, with the club to receive €9 million ($10 million) — €15 million should the club be promoted back to the Bundesliga. The Russian state-run oil giant had sponsored the club since 2007.

Schalke had already removed the Gazpromlogo from their kits for Saturday's second-division match against Karlsruhe. The oil company's representative on the club's board of directors, Matthias Warnig, had also already stepped down from his role.

The Gelsenkirchen-based club, which is hundreds of millions of euros in debt, said in a statement that ending the partnership "would not affect the club's financial negotiating ability."

Hans-Joachim Watzke, the interim head of the German Football Association (DFB), already hinted that financial assistance could be on its way should Schalke choose to split from Gazprom.

"If this requires the solidarity of other clubs in Germany to get them out of this situation, then we have to discuss how we can manage that," Watzke told public broadcaster ZDF.

Schalke's announcement comes after gestures of solidarity were displayed on the pitch and in the stands during German football matches on Saturday, as fans and clubs showed their support for Ukraine in light of Russia's invasion.

There were Ukrainian flags scattered around Bundesliga grounds, while all matches began with a minute's silence.

Greuther Fürth and Cologne held aloft a blue and yellow banner (pictured) with the words "stop war, we're against war" ahead of their 1-1 draw. Bayer Leverkusen refrained from playing their normal Carnival music during a 3-0 win over Arminia Bielefeld, and Freiburg lit up the player tunnel in Ukraine's national colors before their three-goal victory over Hertha Berlin.

Union Berlin, who pride themselves on collating a vibrant playlist ahead of matches, played almost exclusively songs about war and peace. Champions Bayern Munich's 1-0 win in Frankfurt also saw the stadium lit up in yellow and blue with screens showing the message "Stop it, Putin" and Robert Lewandowski wearing a Ukrainian flag armband. Earlier the Bayern striker had backed the Polish Football Association's stance to boycott their upcoming World Cup playoff against Russia.

Similarly, the shirts of Augsburg players featured a Ukrainian flag stitched centrally when they hosted Borussia Dortmund on Sunday.

Shows of support around football

For Danylo Silkan, the only Ukrainian player in Germany's top two divisions, it was an emotional day as he lined up for Hansa Rostock against Nuremberg. His coach, Jens Härtel, said the 20-year-old was "naturally extremely stressed and worried." Silkan is currently on loan from Shakhtar Donetsk.

Rostock had tweeted in support of Ukraine shortly before kickoff.

"Russia’s attack on Ukraine has deeply shaken us all. We condemn any kind of war. Sport stands for togetherness, fair play and solidarity. Our sympathy goes to all innocent people, who we — as well as Danylo Sikan — stand by."

In the Premier League, Manchester United and Watford players, together with United coach Ralf Rangnick, posed in front of a peace sign before kickoff.

In Italy, all Serie A matches were postponed by five minutes in another protest against Russia’s invasion.

This article was updated from a previous version.

UEFA has stripped Saint Petersburg of the Champions League final hosting rights following an extraordinary meeting of its Executive Committee. The Stade de France in Saint-Denis will host the showpiece event on May 28.

Russia hosted the World Cup in 2018, one of the most watched sporting events in the world. Hard to believe that the country’s president would start a war only four years later. Did Putin fool us all?

A year after they were relegated, Schalke booked their return to the Bundesliga with a win over St. Pauli on Saturday. True to form, it was not straighforward for the Royal Blues with drama on and off the pitch.