FIFA and UEFA have announced that Russian clubs and national teams are suspended in all their football competitions until further notice. This comes after Poland, Sweden and Czech Republic refused to play against Russia. 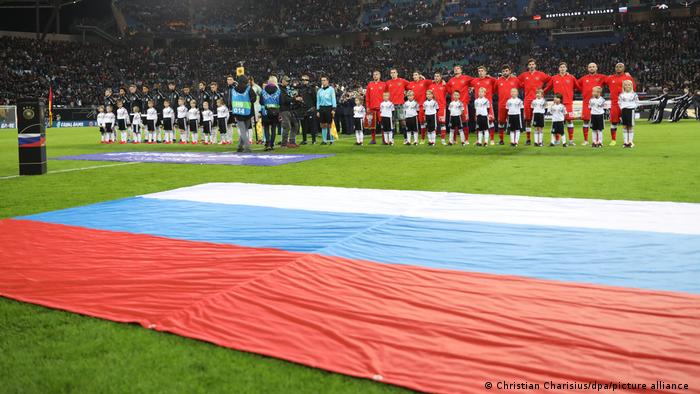 Football's world and European governing bodies, UEFA and FIFA, said on Monday that due to Russia's invasion of Ukraine, they had frozen all Russian club and national teams out of competitive fixtures indefinitely.

"FIFA and UEFA have today decided together that all Russian teams, whether national representative teams or club teams, shall be suspended from participation in both FIFA and UEFA competitions until further notice," a joint statement published on both organization's websites said.

The measure, even if it ultimately proves comparatively short lived, could amount to excluding Russia from the World Cup.

Russia were scheduled to host Poland in a World Cup qualifying playoff on March 24 and assuming they remain suspended at that time, they will be out of the men's World Cup, which kicks off in Qatar in November.

As the suspension covers all club and national teams, Russia's women's team will miss the Women's Euros in England – if the suspension remains in place in July.

The decision also means that Bundesliga side RB Leipzig advance to quarterfinals of the Europa League, as their opponents in the round of 16 were Russian outfit Spartak Moscow.

Monday's statement came a day after FIFA had announced much softer sanctions, saying that it was banning Russia from playing international matches on home soil, but that it would be allowed to continue its World Cup qualifying campaign under the name "Football Union of Russia (RFU)."

However, these measures were deemed unsatisfactory by a number of national federations, including the Polish FA, which had become the first to announce that its teams would refuse to play against Russia while the invasion of Ukraine continued.

He doubled down on Sunday, tweeting: "We are not interested in participating in this game of appearances. Our stance remains intact: Polish National Team will NOT PLAY with Russia, no matter what the name of the team is."

The Polish national team also used Twitter to post its own statement in support of their FA.

"It is not an easy decision, but there are more important things in life than football. Our thoughts are with the Ukrainian nation and our friend from the national team, Tomasz Kedziora, who is still in Kiev with his family."

What made FIFAs position even less tenable, is that had Russia beaten Poland to advance to the next round of qualifying, both of their possible opponents had already announced that they would refuse to take the pitch against them.

"The men's national team will not play against Russia, regardless of where the match is played," the Swedish FA posted on Twitter.

The Czech football federation followed suit, adding that they would not play "even on a neutral venue."

In a separate statement on Monday, UEFA also announced that it was ending its partnership with major sponsor Gazprom.

"UEFA has today decided to end its partnership with Gazprom across all competitions," it said. The decision is effective immediately and covers all existing agreements including the UEFA Champions League, UEFA national team competitions and UEFA EURO 2024."

The suspension of Russia from international football and UEFA's termination of its deal with Gazprom are just the latest in a series of sporting sanctions that have rained down on Moscow since its troops marched into Ukraine last Thursday.

These began with UEFA revoking St. Petersburg's right to host this year's Champions League final, which is now to be held at the Stade de France outside of Paris. Earlier on Monday, longtime Bundesliga club Schalke, who are currently in the second division, also announced that they were planning to end their long association with Gazprom. .

Meanwhile, the International Olympic Committee has called on sports federations to exclude Russian and Belarusian athletes from international events.

Some of the world's top athletes and sporting organizations are all joining in the chorus to condemn Russia's invasion of Ukraine. That's nice, DW's Marko Langer writes, but it's a bit late.

Sport is insignificant in the face of Russia's invasion of Ukraine. However, those connected with it have been making their voices heard. On Friday evening, Bayern Munich's Allianz Arena lit up in the Ukrainian colors.