Russia's Vladimir Putin hopes for better relations with US, West

President Vladimir Putin has expressed his hopes for a "constructive Russian-American dialogue" in 2018, in a letter to world leaders. He also called for continued "dialogue and cooperation" with Germany and Europe. 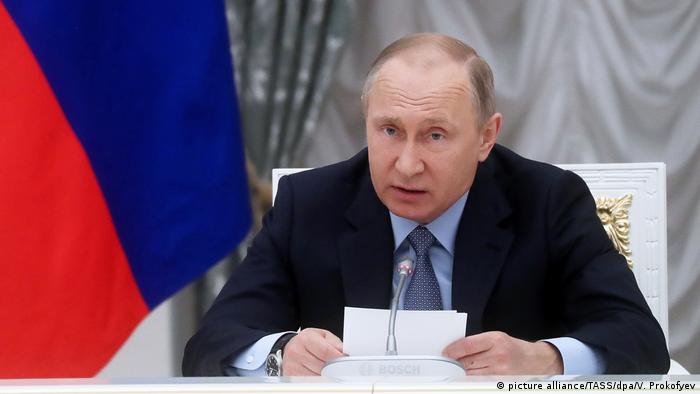 In his annual New Year's letter to world leaders, Russian President Vladimir Putin has expressed his hopes for improved bilateral ties with Europe and the West in the coming year.

Addressing German Chancellor Angela Merkel and President Frank-Walter Steinmeier, Putin said he hoped the two countries would continue to pursue dialogue and cooperation on bilateral, regional and international interests in a way that would "contribute to stronger security and stability in Europe and beyond." 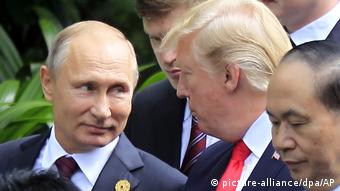 Will the coming year bring closer relations between Putin and Trump?

In greetings to US President Donald Trump, Putin underscored the importance of constructive dialogue between Moscow and Washington to find the best solutions to global challenges and threats.

Putin told Trump that "a constructive Russian-American dialogue is especially needed to strengthen strategic stability in the world."

Stressing the ideals of equality and mutual respect, Putin wrote, "would allow us to make progress in promoting pragmatic cooperation designed for the long term."

Read more: Russia warns US against 'meddling' in presidential election

Putin noted that 2017 had been a good year for Russian-Chinese relations.

He said cooperation between Moscow and Beijing had greatly contributed to finding solutions to current international problems and wrote of his desire to expand the trust-based relationship for the benefit of the "two neighborly peoples" of Russia and China.

He pledged Moscow's support for Syrian President Bashar Assad by emphasizing Russia's commitment to finding a political solution to the country's ongoing civil war, as well as upholding its sovereignty and territorial integrity. Putin wrote that defeating terrorists and re-establishing normalcy would be in the world's best interest and contribute to the security of the Middle East.

The Russian president also sent messages to other heads of state, including the leaders of former Soviet countries and France's Emmanuel Macron.

Vladimir Putin will win Russia's 2018 presidential election, there's no doubt about that. But the recently-kicked off campaign nonetheless has several points of interest. DW gives you an overview of the sideshows. (28.12.2017)

The two leaders agreed on a deal to bring Russian ceasefire observers back to eastern Ukraine. The Kremlin has accused Kyiv of obstructing their officers' work in Donbass and cutting them off from the front line. (22.12.2017)

The White House and Tillerson had differing accounts of which country was being helpful on North Korea. Meanwhile North Korea's UN ambassador has insisted its nuclear ambitions were in self-defense against the US. (15.12.2017)

With the UN General Assembly set to focus strongly on North Korea and its recent nuclear tests, Russia and China have called for a "peaceful resolution" with the pariah state. They suggested a "dual track" approach. (19.09.2017)