Russia sees Catalonia as evidence of EU′s ′double standards′ | Europe | News and current affairs from around the continent | DW | 06.11.2017

As Spain battles with political crisis, some say Russia may have a hand in the turmoil. But does Russia stand to gain from an independent Catalonia? DW examines how the Kremlin views the breakaway bid. 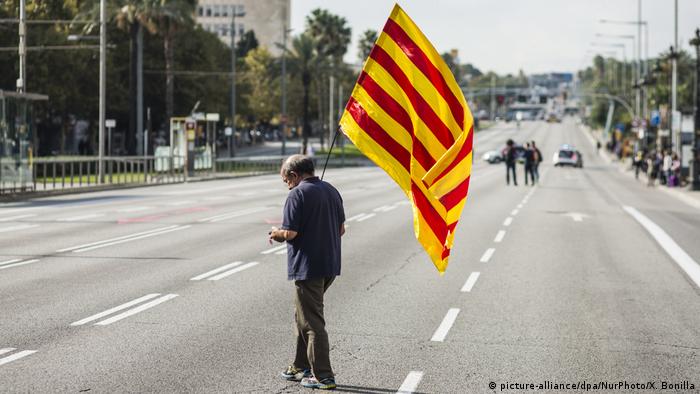 The affluent region in northern Spain declared independence in late October, sending shock waves across the country and the continent.

As with many political divisions emerging across Europe and the West, some analysts have mused about, and others even pointed to, Russia's hand in pushing Catalonia over the edge.

For Juliana, it was clear: an article by Russian state broadcaster RT en Espanol claiming to show European parliaments recognizing Catalonia was evidence of Moscow's meddling in Spain's territorial integrity.

But does Russia really stand to gain anything from an independent Catalonia?

"Russia's position is known here," Putin said. "All that is happening is Spain's internal business and must be resolved according to Spanish law and on the basis of democratic traditions."

However, the outbreak of violence during the referendum provided Russian officials with ample ammunition to criticize the European Union, a position often taken by pro-Kremlin allies to showcase the bloc's fault lines.

While foreign ministry spokeswoman Maria Zakharova reiterated the official Kremlin response that Catalonia's bid was an "internal matter of Spain," she was more candid on her Facebook account.

"Is this the Europe that wants to talk to us about the Crimea referendum and upholding rights?" she asked in a post on the social media platform.

In 2014, Russia illegally annexed the Crimean Peninsula in an internationally-condemned referendum after pro-European protests led to the ousting of Ukraine's pro-Kremlin president, Viktor Yanukovych.

For pro-Kremlin observers, Madrid's violent actions against voters who took part in the independence referendum resembled Yanukovych's deadly crackdown on the pro-European protests of 2013 and 2014.

Political commentator Alexey Martinov, who monitored the Catalan independence vote, called it a "paradox" that EU representatives had slammed Yanukovych for using what he described as the same brutal methods the Spanish police used against voters in Catalonia.

"If they told Yanukovych four years ago that he could use the same methods that are being used in Barcelona, that such methods are 'European,' I believe that there would be none of the horrible events that later took place in Ukraine," Martinov told the Russian news agency Interfax, in an apparent reference to a separatist insurgency that erupted in eastern Ukraine.

Meanwhile, Russia continues to be instrumental in a rebel insurgency it fomented with its military intervention and subsequent referendum on the Crimean Peninsula.

Although the Kremlin does not openly support Catalonia's independence bid, what the region's political upheaval offers Moscow is an opportunity to illustrate "double standards" within the EU's borders.

For Putin in particular, the case of Kosovo is momentous and telling. In February 2008, several western European countries, including Germany, the UK and France, recognized Kosovo, which was an Albanian-majority breakaway region that comprised part of Serbia, as an independent state.

"What we see is that, in our partners' view, there are worthy fighters for independence and there are separatists who cannot defend their rights," Putin said. "Such double standards — this is a very striking example of double standards — are fraught with serious danger for the stable development of Europe and other continents."

While Spain refused to recognize Kosovo as an independent state, the majority of the EU's 28 member states followed suit.

"Why were they so unthinking, driven by fleeting political considerations and their desire to please — I will put it bluntly — their big brother in Washington, in providing their unconditional support to the secession of Kosovo, thus provoking similar processes in other regions of Europe and the world?"

If anything, the view from Moscow shows that for Russia, Catalonia is not an isolated political issue but forms part of a fate the EU sealed over a decade ago – and one that serves its interest only insomuch as it exposes the bloc's weaknesses.