Russia is putting its military along the Golan Heights frontier as it seeks to temper tensions between Israel and Syria. A wild card remains how Russia can manage a potentially explosive Israel-Iran conflict in Syria. 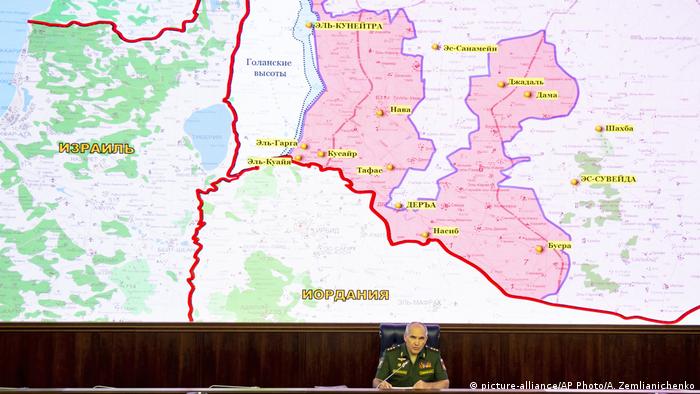 The Russian army said Thursday it would deploy military police along the volatile Golan Heights frontier between Syria and Israel, underlining the mediating role Moscow is playing to reduce tensions between the two sides.

Syrian forces backed by Russian airpower this week took full control of three southern provinces along the border with Jordan and the Israel-occupied Golan Heights after a weeks-long offensive against rebel and jihadist groups.

The fighting has worried Israel, which believes Iranian forces and allied Shiite militia backing the Syrian army will entrench themselves on its doorstep. Clashes also threatened to spill across the frontier, highlighted last week when Israel shot down a Syrian jet it said had entered its airspace.

Russian army General Sergei Rudskoy said at a briefing in Moscow on Thursday that as a result of the restoration of Syrian government control "conditions have been created for the resumption of the activities of UN peacekeeping forces in the Golan Heights" for the first time since they withdrew from a buffer zone in 2012 due to threats to their safety. 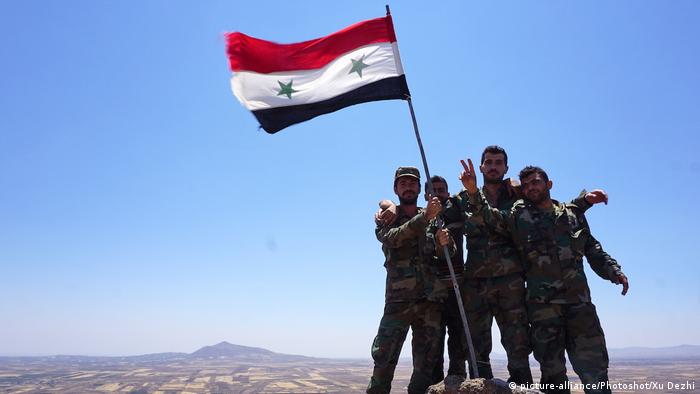 Syrian forces are now control of more than two-thirds of the country. A US-backed Kurdish and Arab force in the northeast controls about 25 percent, while anti-regime rebels and jihadists are now largely confined to a small area in Idlib province in the north. 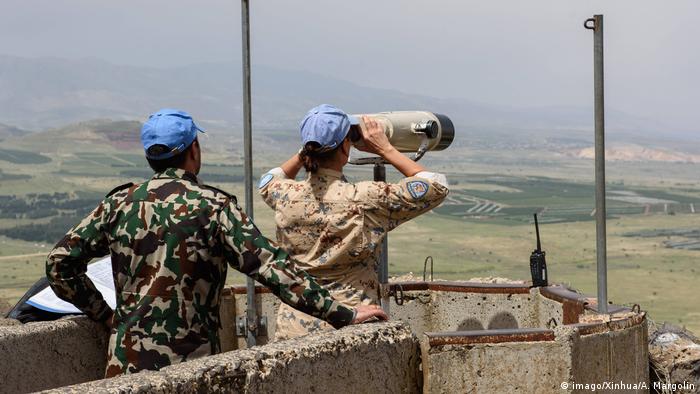 Israel captured part of the Golan Heights from Syria in the 1967 Six-Day War and later annexed it.  A UN peacekeeping force has since 1974 monitored a buffer zone separating Syrian and Israeli forces, which technically remain at war.

Israel has been in intense diplomatic talks with Russia in recent weeks, hoping that Moscow will be able to use its influence in Syria to prevent the entrenchment of Iranian forces and its Lebanese proxy, Hezbollah, who have propped up Syrian President Bashar al-Assad in the country's seven-year civil war.

The presence of Russian military police is viewed by analysts as a way to reassure Israel about its security concerns regarding Iran and Hezbollah. It may also serve to send a message to Israel to refrain from unilateral military action along the frontier.

"From our perspective, the situation is returning to how it was before the civil war, meaning there is a real address, someone responsible, and central rule," Defense Minister Avigdor Lieberman said during a visit to missile batteries.

"I think this is also in Assad's interest" to avoid a flare up of violence, he added.

Israel has carried out dozens of airstrikes in Syria against Iranian forces and Hezbollah. At least two major retaliatory actions this year were in response to a suspected Iranian drone drifting over the Golan Heights frontier and another after Israel accused Iranian-backed forces of firing at their frontline troops.

Lieberman said that for calm to hold Syria must abide by the 1974 UN monitored armistice. He also repeated Israel's demand that Iran not establish military bases in Syria and that the country not be used for advanced missile shipments to Hezbollah.

Russia has offered Israel an assurance that Iranian forces would remain at least 100 kilometers (62 miles) from the Golan Heights, but Israel has reportedly rebuffed this offer and demanded a complete Iranian withdrawal from the country.

"There are no units of heavy equipment and weapons that could pose a threat to Israel at a distance of 85 km from the line of demarcation," Lavrentiev was quoted by TASS news agency as saying.

However, he said Iranian "advisers" may be among Syrian forces closer to the Israeli border.

Seven-years into the civil war, the Syrian army has been gutted and Iranian forces and allied militia have carved out vast spheres of influence.

As Aymenn Jawad Al-Tamimi, an expert on Syria wrote in a recent analysis, the nature of Iran's presence in "Syria is not one of dominating and taking control of the system, but rather integrating so as to become an indivisible part of the system."

On Monday, Russia's ambassador to Israel said Moscow sees "any demands to expel" Iran or other foreign troops invited legitimately by the Syrian government as "non-realistic."

At the same time, Ambassador Anatoly Viktorov said that Russia disapproved of Israeli attacks on Iran's presence in Syria, but noted: "We cannot dictate to Israel how to proceed ... It is not up to Russia to give Israel freedom to do anything, or to prohibit Israel to do anything."

The US could soon recognize the Golan Heights as Israeli territory, Intelligence Minister Yisrael Katz said in interviews. The move would follow the US recognizing Jerusalem as capital and exiting the Iran nuclear deal. (24.05.2018)

Israel has shot down a Syrian fighter jet that it says breached its airspace over the Israel-occupied Golan Heights. Syria has accused Israel of targeting the plane "in Syrian airspace." (24.07.2018)

The Israeli military says it has rescued hundreds of members of a Syrian volunteer organization from a volatile border area in Syria's southwest. It's the first such intervention by Israel in Syria's civil war. (22.07.2018)