An Israeli jet was shot down by Syrian anti-air fire after Israel intercepted an Iranian drone launched from Syria. The incident is one of the most serious involving Israel, Iran and Syria during Syria's civil war. 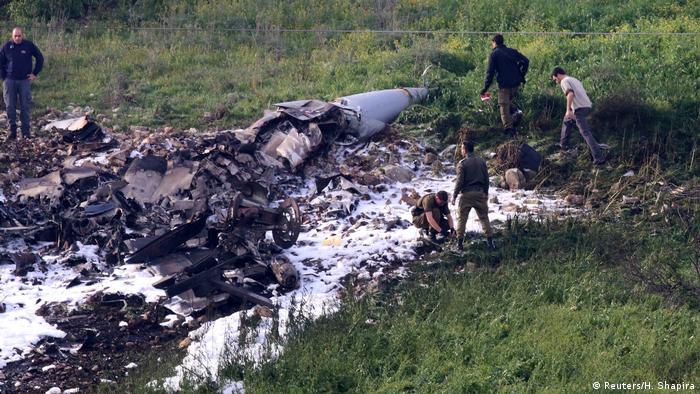 On Saturday, Israeli planes carried out attacks on "Iranian targets" in Syria after intercepting a drone, with one F-16 fighter downed by heavy anti-aircraft counter fire, a military spokesman said.

Israeli military spokesman Jonathan Conricus wrote on Twitter that the plane had crashed in Israel but the pilots were safe, adding that the incident occurred as Israeli forces attacked the "Iranian control systems in Syria" responsible for the launch of the drone.

An Israeli official said the jet was shot down. The pilots were taken to hospital for treatment, according to the military, with one seriously wounded and the other lightly.

In a separate statement, the military reported that a "combat helicopter successfully intercepted an Iranian UAV that was launched from Syria and infiltrated Israel."

It said it had carried out "large-scale" attacks on at least a dozen Iranian targets in Syria in response to the unmanned aerial vehicle's intrusion into Israeli airspace.

But the Syrian military denied that the drone had violated Israeli airspace, claiming that the aircraft was on a mission to gather intelligence on "Islamic State" militants within Syria.
Read more: Syria conflict: What do the US, Russia, Turkey and Iran want?

The Syrian state news agency SANA quoted an unidentified military source as saying that government forces had responded with anti-aircraft fire to an Israeli act of "aggression" against a military base and that more than one Israeli plane had been hit.

The Israeli military insists that only one plane was affected.

Israel's targeting of an Iranian site in Syria marks an escalation in military action involving the three countries and is one of the most serious incidents of its type since Syria's conflict began eight years ago.

Iran and its Lebanese militia ally, Hezbollah, are both major players in Syria's multi-faceted civil war. Israel has experienced spillover violence from the fighting and responded with measures such as shooting down several drones that have tried to infiltrate its territory.

Israel has warned of increasing Iranian involvement along its borders with Syria and Lebanon, and officials have expressed fears that Iran could use Syrian territory as a base for attacks.